The best-known sector of the seaweed industry, especially in the Western world, is that of the phycocolloids – the gelling, thickening, emulsifying, binding, stabilizing, clarifying and protecting agents known as carrageenans and agars (extracted from red seaweeds) and alginates (extracted from brown seaweeds). They are used in the food, brewing, textile, pharmaceutical, biotechnological, coating and drilling industries.

As humanity reduced its principal sources of meat, poultry and fish to a small selection of widely consumed items, it did the same for edible seaweeds, whose market is dominated by four genera: Laminaria and Saccharina (for dashi broth), Porphyra (for sushi) and Undaria (for miso soup). Yet new products and applications of seaweeds are emerging.

Seaweeds can also be used as commodity energy-carrying molecules in biofuels, bioalcohols and heat/power generation.

In the last two decades, there has been a renewed interest in the mariculture of seaweeds, not only for the valuable biomass they represent, but also the biomitigative services they provide as one of the extractive components of integrated multi-trophic aquaculture (IMTA).

IMTA is the farming in proximity of several species at different trophic levels and with complementary ecosystem functions, in a way that allows one species’ uneaten feed and wastes, nutrients and by-products to be recaptured and converted into fertilizer, feed and energy for the other crops. The approach takes advantage of synergistic interactions among species, combining, for example, the cultivation of fed species (finfish or shrimp) with inorganic extractive species (seaweeds or aquatic plants) and organic extractive species (shellfish and other invertebrates).

This ecologically engineered ecosystem management approach provides biomitigative services for improved ecosystem health, economic stability in coastal and rural communities, and societal acceptability. That is what the author and colleagues have been developing in the Bay of Fundy, Canada, since 2001, and with Cooke Aquaculture Inc. since 2006.

The biomitigative services of seaweeds are often not recognized by the rest of the aquaculture world and society in general. Seaweeds should be considered candidates for nutrient or carbon trading credits (NTC, CTC) within the broader context of ecosystem services. Considering the average composition of seaweeds and the value of NTC and CTC – around U.S. $10-30/kg for nitrogen, $4/kg for phosphorus and $30/mt for carbon – the ecosystem services of cultivated seaweeds are worth U.S. $592.5 million to $1.698 billion, or as much as 23 percent of their present commercial value.

Recognition of the full value of IMTA would create economic incentives to encourage aquaculturists to further implement IMTA systems to increase the overall sustainability, profitability and resilience of aquaculture farms and their societal acceptability by the general public as efficient food production systems.

The kelps growing at the IMTA sites in the Bay of Fundy are also being used in salmon-feeding trials. This is part of the diversification strategy to reduce fishmeal in fish feed formulations.

Seaweeds can also be sources of proteins and other ingredients. They do not trigger competition with staple foods from terrestrial plants, causing price increases – as seen with the first-generation biofuel suggestions of of corn and soybeans. This also reduces deforestation for more farm land, irrigation and fertilizers. If partial substitution with seaweeds proves promising, it will represent a very fitting loop within the IMTA strategy.

Recently, seaweeds have become the topic of debates regarding their potential for biofuel production and energy generation. Biofuels are making news headlines because we are realizing the world’s petroleum reserves have been drained at an accelerating rate over the last two centuries, while it took millions of years for nature to produce crude oil from the decomposition of plants (a biofuel, too).

We are now trying to shortcut the process by using different plant biomasses and hope to find expediting solutions. There is, however, no magic silver bullet yet, and the different biomasses seem to fall out of fashion at a fast pace as their environmental, land use and food security limitations are understood.

Seaweeds made the news in the 1970s, when the oil crisis was of a primarily geopolitical nature. They are now back, but we should be prudent to not enter another phase of promising what may not be attained, thereby risking another “purgatory period” between energy crises, when public interest for these organisms is seriously diminished. Such fad cycles are not productive for the acquisition of much still-needed scientific knowledge.

Many steps before (cultivation, harvesting, dewatering, pretreatment, transportation and storage) and during (separation, fractionation and sequential processing) the different technological pathways of an integrated sequential biorefinery (ISBR) still require elucidation, and scaling up from laboratory experiments to commercial markets needs reality testing. How do we reconcile the seasonality of the biomass? Will the costs of production be economically competitive in comparison to those for other sources of energy? And, finally, will it be societally acceptable, especially in the Western world, when the number of hectares needed to secure the raw material for significant biofuel production is validated?

We should avoid the often-heard argument that there is still plenty of space on this planet covered 71 percent by oceans. Even if aquaculture expands into more exposed and open-ocean locations, it is doubtful we will see farms in the middles of oceans due to logistics, weather and jurisdictional reasons. Moreover, developing large amounts of seaweed cultivation in ecosystems poorer in nutrients than coastal areas could induce limitations in nutrient processes and reduced yields for seaweed farms, unless associated with IMTA systems.

Although headlines about biofuels in the name of energy security/self-sufficiency/alternative energy appear in the news and grant/subsidy applications, it appears the market may not be ready for the production of low-value commodity energy from biofuels, but for a range of bio-based, high-value compounds as people start to realize that some co-products of an ISBR platform could, in fact, be the real drivers for generating more immediate revenues.

We now have an opportunity to reposition the roles, applications and values seaweeds have in coastal ecosystems, the economy and our society, and demonstrate how relevant they can be in our everyday activities and in solving global issues.

eaweeds remain a relatively untapped resource with a huge potential – as edible food, food ingredients, cosmetics, agrichemicals, fishmeal, biomaterials and bioenergy molecules – while being significant transitory nutrient and carbon sinks that could be the objects of trading credits in recognition of their ecosystem services. Moreover, the vast majority of seaweed species has yet to be screened for various applications, and their extensive diversity ensures that many beneficial new algal products and processes will be discovered.

However, it is important to recognize that some biotechnological issues and societal constraints remain, and a long-term responsible and gradual interdisciplinary implementation strategy should be adopted. It will be up to us to bring aquaculture into a new ERA of Ecosystem Responsible Aquaculture, based on the principles of what Max Doty called “marine agronomy” in the 1970s.

This greener approach to the Blue Revolution, the Turquoise Revolution, not only targets practices in the marine environment, but also the freshwater environment, open water and closed-containment operations. Instead of talking about agronomy (in Greek, “the laws of the [land] fields”) in marine or freshwater environments, it may now be time to talk about aquanomy (“the laws of the aquatic fields”), especially if we want to responsibly produce large amounts of seaweeds as crops.

It is interesting to note that traditional agricultural practices, such as crop diversification, rotation and fallowing, are being transposed to aquacultural practices in which extractive species, including seaweeds and invertebrates, play key roles. Extractive aquaculture should become as routine as fish farming for a more ecosystem-based management approach to aquaculture.

It is also time to walk the talk and recognize the implications – notably regarding marine spatial planning and our societal production and food habits – of the policies and scale-up trajectories we are elaborating for the future of an ever-growing and hungry human population. Depending on our choices, we will be able to elaborate grandiose projects or more realistic ones with concrete and manageable deliverables and palpable benefits at local or regional scales. 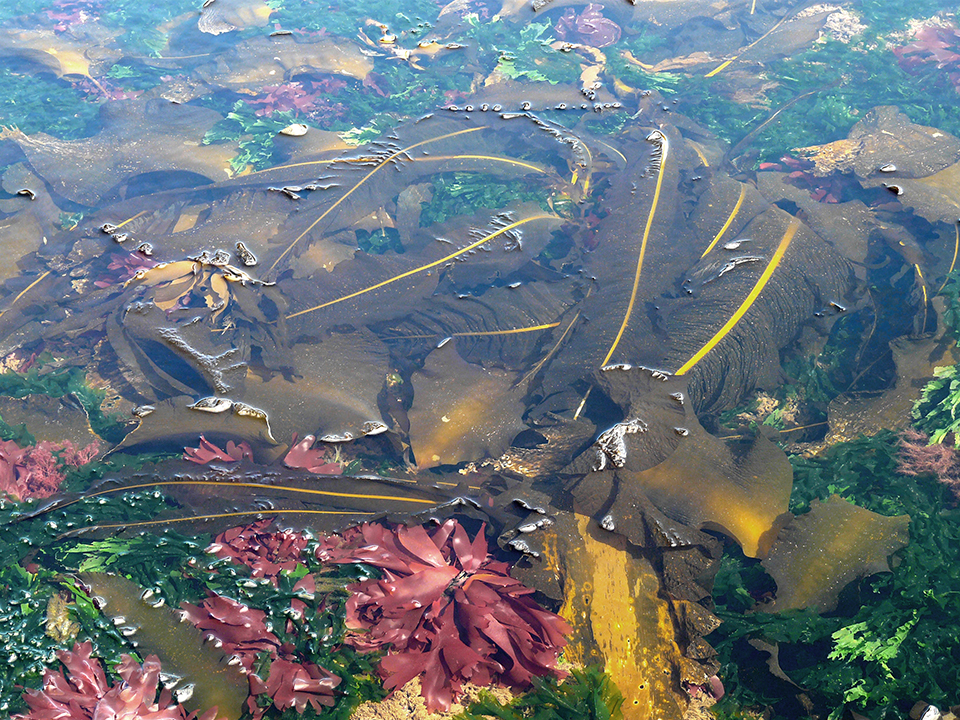 Seaweed plays key roles in Earth processes as a primary producer and link in the food webs of coastal and estuarine ecosystems.