Limits on salmon production, biological challenges has some investors looking to other species, new technologies

To investors working in the aquaculture space, sure bets can seem limited. To many, there’s farmed salmon – the most mature and most heavily capitalized segment in all of aquaculture, worth between $10 billion and $11 billion a year globally – and then there’s everything else.

And why not? With farmed salmon prices set high and buoyed by strong demand worldwide, the forecast is mostly sunny.

Opening keynote speaker at the event and Jordheim’s colleague, Henning Lund, a senior analyst at Pareto, echoed those sentiments: “The market outlook is blue sky. We don’t see many clouds on the horizon. All farmers see massive cash flows these days,” he said. “So why are salmon farmers not producing more? Because they can’t.”

Government regulations in the world’s top two salmon-farming areas –Norway and Chile – are capping production to reduce the risk of infectious diseases and other issues that have hampered the industry throughout its history. Norway, for example, is limiting growth to just 3 percent annually, and only for the very top performers, said Lund.

In aquaculture, if you don’t have a good management team, the consequences could be catastrophic.

And in Chile, producers are under pressure to reduce stocking densities in ocean net pens and cap the amount of smolt releases. AquaChile CFO Francisco Lepeley told attendees that new rules have had “very erratic” and “unpredictable” results in the areas where they’ve been implemented. “We see strong demand, but limited capacity for industry to grow,” he said, predicting further consolidation in the industry.

Facing intense biological challenges in the form of infectious diseases and sea lice, salmon farmers are spending billions to protect their assets. For sea lice alone, the industry shelled out an estimated $1 billion last year in preventative measures, according to Malcom Pye, CEO of Benchmark Group, based in the United Kingdom.

“There is money to spend on solving that problem. That means a huge opportunity,” he said. As bright as the prospects are for salmon, the industry is in a “difficult position,” said Pye, because of sea lice. “The challenge is as bad as it’s ever been. Most of the industry are experiencing chemical-resistance problems.”

Reducing the industry’s reliance on antibiotics is crucial, added Pye, for greater market acceptance and for the aforementioned cost concerns. Early Mortality Syndrome (EMS) in shrimp and streptococcus in tilapia are two other major diseases costing the industry billions in losses and in loss prevention. Antibiotics are costing the aquaculture industry $4 billion a year, said Pye, who called for enhanced animal welfare practices industrywide, including the use of vaccines and probiotics.

“Prevention is better than cure,” added Pye. “We can spend a pound on technology and save our customers 10 pounds.”

Driving that point home, Jordheim of Pareto Securities said that because most assets in seafood are exposed to biological risk, “Many investors are still sitting on the sideline.”

Despite its challenges, Thor Arne Talseth, portfolio manager at Amerra Capital Management, sees the salmon industry as a model for two other species that company has invested in: sea bass and sea bream in the Mediterranean. One year ago, Amerra acquired a 90 percent stake in Greek aquaculture specialist Andromeda Group from South Eastern Europe Fund.

“What we see from salmon is the profitability. What we’re doing in the Mediterranean with sea bass and sea bream, we see tremendous improvements in cost and growth, and we see how to effectively apply feed by implementing innovations developed in salmon,” said Talseth.

For mergers and acquisitions at the scale of the Andromeda sale, Talseth and other investors assembled for a panel discussion at the forum agreed that technology, know-how, brands and established markets are all important factors for any deal. But what comes first is the management team.

“In aquaculture, if you don’t have a good management team, the consequences could be catastrophic,” said Talseth. “Andromeda has the best management team in the region.”

Experience is key, but so is patience, said Brad Warren, managing director at Forum Capital Group, a New York-based firm whose portfolio includes several seafood assets, including The Fishin’ Company, Paturel International and East Coast Seafood, among others.

“We need more patient investors, with a different approach to the way money is invested,” said Warren, adding that seafood “doesn’t fit the traditional management structure very well. But I see more money coming in to the sector, which is a positive thing for all.”

Prevention is better than cure. We can spend a pound on technology and save our customers 10 pounds.

Warren, whose company has evaluated many aquaculture opportunities, land-based and otherwise, said he has “found a lot of good ideas but not a lot of good management teams.” At least, nothing like he’s witnessed in the mature salmon industry. “All roads lead back to salmon,” he said.

“We haven’t found anything [in aquaculture] with the whole package: species, management, location, with the right returns,” Warren concluded.

Other investors are hunting down deals away from the water. For early-stage companies and budding service technologies – or even the outfits that are not quite ready for prime time – an entirely different mindset is required.

“We’ve seen patience be successful in the survival of portfolios,” said David Tze, managing partner at Tze Venture Search Fund for Aquaculture Technology. “There aren’t many players that have an aquaculture specialty and a patient attitude.”

Tze’s new venture, which he launched earlier this year, is now focused on the tools, instead of the production. Alternative ingredients for aquafeeds is a field ripe with innovation, and for early-stage investors, it’s the only type of technology universally applicable to fed aquaculture, he said.

“Bulk aquafeed ingredients of any kind ­– I’m not betting on any specific species, region, method or market. It’s a good mix, and there are opportunities for multiple winners,” said Tze. “It’s like selling picks and shovels during the gold rush.” 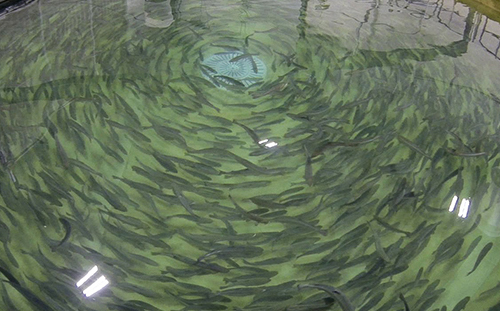 Land-based aquaculture, perhaps the ultimate environmental risk-mitigation tool, was the talk of the town at the IntraFish Seafood Investor Forum. Once scoffed at for high capital and energy requirements, RAS now has a crowded bandwagon.