If possible, ponds should be sampled once a week and a running average calculated for the last three to four samples. A-four week running average will include all phases in the lunar cycle, and will minimize potential effects on sampling of the lunar phases, molting and tide effects on population distribution. Keep in mind that shrimp tend to be markedly more active during certain lunar/tidal periods, which will affect estimates.

In some ponds that were managed by one of us (DMD), the shrimp sampled the day before harvest (we used weekly samples) were at an average size – for example 18 grams. When they were weighed at the drain down harvest the next day, they actually averaged 20-21 grams and were always biased to the smaller sizes. To estimate pond densities at 10/m2, we seemed to consistently underestimate the population by about 10 percent. Thus, we developed and used an appropriate “fudge” factor to compensate in our feed rate calculations. To cover the pond evenly with our cast net sampling, we had numbered and marked stations (wooden stakes driven into the pond bottom) in our large ponds. I was told that we would have to sample at least 5% of our bottom area for the results of our sampling to be statistically significant. That just was not practical, so in our large ponds (ponds ranged from as small as 5 acres to as large as 134 acres) we had about 3-5 stations per acre (depending on pond size) where we would make two casts from a boat – in opposite directions at the station marks. Again, uniformity and consistent technique in sampling seemed to offset bias and produce consistent results with which we were consistently able to produce feed conversions of 1.5 to 1.8:1.

One of us (DMD) has experimented with some high tech approaches over the years. One used side-scanning sonar, which did pick up the shrimp and count them, but it also counted other things that were not shrimp (small rocks, clam shells, etc.), and ultimately had as many variables and biases as the cast net and was less reliable. It was also more expensive and harder to interpret and understand than the non-electronic, low-tech cast net system. Another approach involved a high-tech system that used a video parts counter (designed to count parts going down a conveyor belt) to count and measure the shrimp as they were being pumped during the growout phase transfer and at harvest. Since this was a three-phase intensive growout system, we could count and measure the shrimp when they went in the first phase, and between each phase and at harvest, with almost absolute accuracy and have it all recorded on video tape for verification.

Our private funding ran out after our first few trials and before the system was totally refined. Sufficient time has now passed that I believe, from my experience, that this is the way to manage population assessments in multi-phase, intensive growout systems. Obviously, accurate population quantification is an essential management tool in successful intensive shrimp farming. It directly impacts the bottom line/shrimp production through feed conversion, cost, water quality, pumping, filtration and resulting energy cost, which affect cost-efficiency and profitability. Besides, I have seen few brighter smiles than from a corporate accountant when you tell him he can have an accurate inventory of the product being produced.

The proper management of shrimp health on shrimp farms is a critical issue. Management strategies need to be developed to prevent the spread of the virus and improve the economics of disease-related problems. One way of managing potential disease-related problems is to institute a health management program that is designed to monitor the health status of individual pond populations. This involves establishing a history of the population (i.e. historical information on broodstock and PL’s) then monitoring them from arrival through harvesting. Routine clinical examinations are conducted for subsets of all PLs received on the farm during acclimation and pond stocking. “Survival cages” are placed in the ponds during stocking and maintained for 48 hours after stocking to monitor survival numbers.

Populations should be sampled weekly, and even daily if needed, and routinely checked for lesions, spots, deformities, bacterial necrosis, red tails and appendages, feeding and behavior. If abnormalities are observed, procedures for acquiring an accurate diagnosis are set in place. This includes clinical examinations, histological examinations and if possible gene probe “in situ” hybridization tests. The objective of this continuous monitoring is to define any problems or diseases at the onset, determine time and point of entry, and immediately implement management procedures addressing and controlling the problem.

A cost-effective health management and biosecurity program requires reliable diagnostic tools that shrimp farmers can use to make adequate and timely decisions on management procedures to control or exclude pathogens. Virulent pathogens can produce catastrophic mortalities very rapidly, and shrimp farmers need this fast diagnostic capacity in order to respond effectively. Practical diagnostic methods that are accurate, sensitive, rapid and economical to conduct are already available, including PCR, dot blot gene probes and various methods for rapid fixation and staining.

Carefully select the animals that will be sampled for testing. There are two methods of sampling: random and biased. In the process of random sampling, animals are collected on a non-selective basis often using a cast net or a bucket. This is done for population testing in order to get an idea of disease prevalence in a pond. Non-random or biased sampling relies on careful selection of individual animals based on appearance or behavior. Animals displaying abnormal behavior such as not eating, swimming erratically, spending increased amounts of time at the surface or around the edges of the pond, or those individuals that are discolored or have a mottled or abnormal appearance are ideal animals to sample. Non-random sampling should be done when testing is to be done for disease diagnosis. Dead animals should never be sampled. Instead, use moribund or sick individuals.

When collecting shrimp for pathogen or disease assessment, different guidelines should be followed. Brock and Main (1994) recommend five to10 symptomatic animals as an adequate number of specimens for diagnostic evaluation, but if the objective is to assess the presence of a pathogen carrier or latent infection by a pathogen (like IHHNV, TSV, WSSV), then statistical criteria must be followed. The sample size required will then depend on the confidence level desired for the test (usually 95 percent is acceptable), on the prevalence of the pathogen/disease in the population, and on the number of shrimp in the population. Table 1 shows the number of shrimp to examine for detection of a given prevalence of a pathogen/disease (after Brock and main 1994). Note that the number of animals needed for pathogen/disease detection for a given confidence and prevalence levels do not change significantly for populations over 1,000 individuals.

Cast-netting is about the only effective sampling tool currently available and widely used to sample shrimp ponds. However, if you are looking for significant precision – given the typical variables mentioned earlier – cast netting can leave much to be desired. Nevertheless, with practice and common sense, cast netting can produce adequate data for successful management of shrimp ponds. It is important, from a practical standpoint, that sampling techniques are adapted to the site and resources available, and the human resources available. 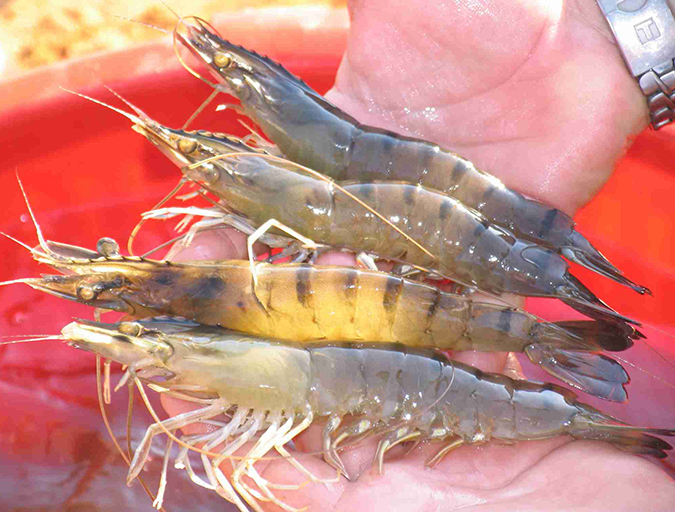 Knowledge on population size and size distribution in their production ponds, along with health status assessments, is an important management tool for shrimp farmers around the world. Proper sampling planning and execution involve a number of activities to assure proper, actionable results.