Acute hepatopancreatic necrosis disease (AHPND), also known as early mortality syndrome, has caused severe mortalities in farmed populations of Litopenaeus vannamei and Penaeus monodon shrimp. The disease has led to significant production and economic losses at shrimp farms and to the aquaculture industry in general in affected regions.

Clinical signs of the disease in infected shrimp include an empty gastrointestinal tract and whitish, atrophied stomach and hepatopancreas. The causative agent was determined to be the unique strains of the bacterium Vibrio parahaemolyticus that contain the pirA- and pirB-like toxin genes. These genes are located in a large, 69-kb plasmid. Plasmids are self-replicating, double-stranded DNA molecules that pass between bacterial cells through conjugation and transformation.

Initially, diagnosis of AHPND could only be accomplished through histological examinations and laboratory bioassays. Later, molecular diagnostic methods based on conventional polymerase chain reaction testing targeting pirA- and/or pirB-like genes became available. However, quantification of the AHPND pathogen in the infected animals is one of the most important means for monitoring disease progression.

Bacterial quantities can be determined through counting colony-forming units (CFUs), but this is a laborious and time-consuming method. Real-time, quantitative polymerase chain reaction (qPCR) analysis has become an attractive alternative for its advantages of speed, sensitivity and specificity.

The PCR primers and specificity-enhancing hydrolysis probe for the detection of the virulence plasmid were selected from the pirA-like gene. The primers were used to amplify a DNA fragment of 135-bp. The probe was synthesized and labeled with different dyes on either end.

The detection limit of this qPCR assay was less than 10 copies of virulence plasmid. The standard curve (102 to 108 copies of plasmid) is shown in Figure 1. This method can detect 12 AHPND-causing V. parahaemolyticus isolates from Mexico and Vietnam, but did not cross react with 35 non-pathogenic Vibrio bacteria.

The authors used two cases of farm-raised L. vannamei collected in 2012 to detect and quantify the AHPND plasmid. Case 1 consisted of 32 small juvenile shrimp collected from China that showed significant mortalities and severe effects of AHPND, determined by histological examination.

By qPCR, DNA extracted from each shrimp proved to be AHPND-positive. The quantities of virulence plasmid ranged from 2.5 x 103 to 4.7 x 106 copies per milligram of tissue (Table 1).

The second case included 12 juvenile shrimp collected from the Ben Tre Province of Vietnam. These shrimp suffered high mortalities and were later found to have AHPND through histological examination. In qPCR analysis, DNA extracted from hepatopancreas tissues found five of the 12 shrimp were positive for AHPND. The quantities of virulence plasmid were 3.9 to 5.8 x 105 copies per milligram of tissue.

Virulence plasmid copy numbers varied widely, ranging 4-105-6/mg tissue. Thus, the AHPND bacterial load in affected shrimp would be expected to also be highly variable. This suggested that factors other than bacterial load, such as shrimp age or size, the presence of other pathogens or environmental conditions, may influence the mortalities in affected farms.

Shrimp collected from laboratory infections were analyzed for AHPND. In bioassay 1, a per os feeding experiment, specific-pathogen-free L. vannamei with a mean individual weight of 1 g were fed shrimp feed mixed with AHPND V. parahaemolyticus. The bacteria were first grown to 1 x 109 CFU/mL and mixed with shrimp feed at a 1:1 ratio.

All 50 infected shrimp became moribund or died within two days. These shrimp were positive for AHPND by histological examination and qPCR. The quantities of virulence plasmid ranged from 2.5 x 103 to 4.7 x 106 per milligram of tissue (Table 1).

In bioassay 2, shrimp were exposed to AHPND V. parahaemolyticus by immersion at a concentration of 2 x 105 CFU/mL water. All the shrimp died within two days. By qPCR, the quantities of virulence plasmid in the moribund/dead shrimp ranged from 1.8 x 103 to 7.9 x 105 copies per milligram of tissue (Table 1).

Bioassay 3 was a challenge study to a selected line of L. vannamei. At a mean weight of 2 g, the shrimp were stocked in 1,000-L tanks and given feed containing AHPND V. parahaemolyticus. At day 9, 244 shrimp (48 percent) survived, whereas none of the 50 shrimp in the positive control tank survived after two days.

Although hepatopancreas tissue is usually sampled for detecting AHPND V. parahaemolyticus, a fourth bioassay was performed to demonstrate that water samples can be used for AHPND diagnostics.

In this bioassay with shrimp fed feed mixed with AHPND V. parahaemolyticus, water was sampled from each tank at day 5 and concentrated 50 times. AHPND was detected in seven of nine water samples by the highly sensitive qPCR, ranging 3.5 x 102 to 2.2 x 106 plasmid copies/mL water (Table 1). This is relevant, since it has been reported that AHPND can be transmitted via water from AHPND-affected ponds. 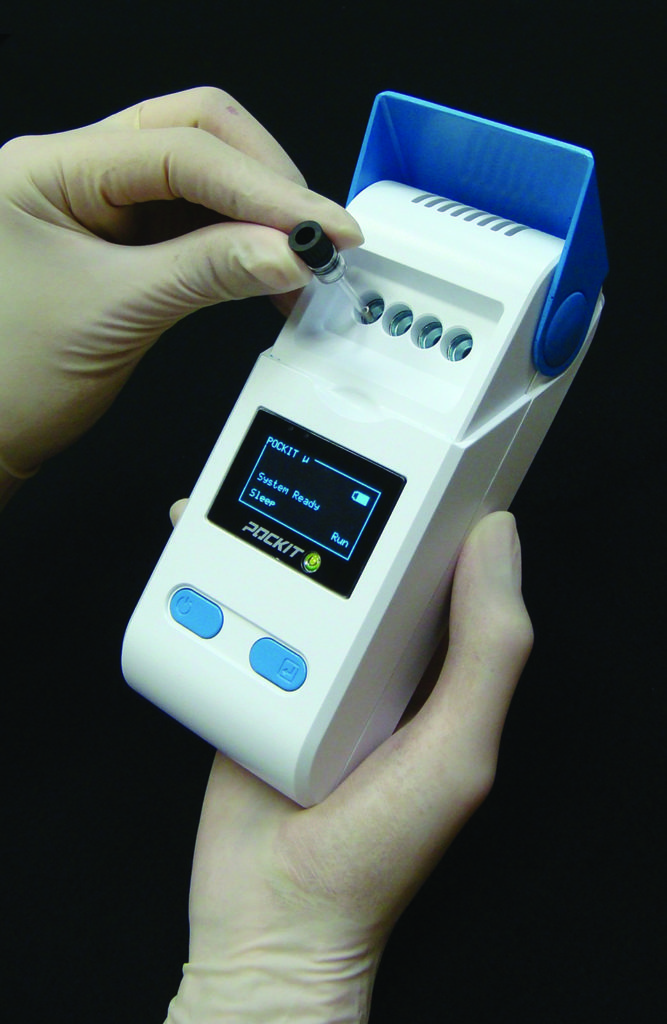 In analyzing the plasmid sequence from the whole genome sequences of AHPND V. parahaemolyticus (V.p) isolates, researchers identified a clear geographical variation within the plasmid, and developed PCR methods to characterize AHPND V.p isolates as either Mexico-type or Southeast Asia-type.