Recent advances in their use as an aquafeed ingredient

Seafood from wild-catch and aquaculture is the largest animal protein industry in the world. Wild-catch tonnage has been stable since 1990 at around 90 million tons, so aquaculture essentially accounts for the growth since (Fig. 1). Aquaculture has grown faster than any animal protein sector at approx. 7 percent compound annual growth rate over the past two decades, compared to about 4 percent for poultry. Feed is a major cost in livestock production, and protein ingredients are the main cost of aquafeeds.

Efficient feed – and particularly protein conversion – is essential to manage production costs and improve the sustainability of aquaculture. Generally, aquacultured species have relatively lower feed conversion ratios (FCRs) of 1.1 to 1.6 kg of feed per kg of edible seafood, compared to 1.4 to 1.8 for poultry, 2.6 to 4.4 for pork, and 3.5 to 9 for beef. Consequently, aquaculture contributes to a more sustainable animal protein industry, and single cell protein (SCP) is ready to play a major role in its future of aquaculture.

Even with diminishing inclusion of fishmeal in aquaculture feeds (Fig. 2), an estimated shortage ranging from 0.4 to 1.32 million metric tons could occur by 2050. Plant-based ingredients can be refined to improve compatibility with aquaculture diets, for example, by removing anti-nutritionals like phytic acid [the major storage form of phosphorous in nuts, cereals, legumes and oil seeds], but this increases cost and most successes so far have come with species for which we have the most nutritional knowledge, for example, salmonids.

Consequently, there is demand for more suitable protein ingredients that maintain feed performance, benefit aquaculture health and stabilize supply and economics during the industry expansion. SCP has the potential to deliver multiple solutions through a myriad of products and production approaches, but considerable research, development and particularly scale-up is still required.

SCP products can be made from different microbial sources, including microalgae, yeast and other fungi, and bacteria (Table 1). All are actively being investigated and commercialized by several major companies and exhibit unique advantages and challenges.

To validate new products, extensive feeding trials are necessary, and the aquaculture industry involves many species and production conditions. This article primarily focuses on species for which we have greater commercial and nutritional knowledge, including Pacific white shrimp (Litopenaeus vannamei), Atlantic salmon (Salmo salar) and rainbow trout (Oncorhynchus mykiss). In most trials, the goal was to evaluate growth and feed conversion when fishmeal is replaced by the SCP product, but trials also investigated broader nutritional effects.

A defatted Desmodesmus sp. SCP product and an algal meal derived from Nanofrustulum and Tetraselmis has been commercially tested on salmon. In one study, defatted Desmodesmus sp. SCP could be included at up to 20 percent of the feed without any adverse effect on salmon growth or its final composition, and in another study, the algal meal could be included at 10 percent without affecting salmon performance.

For rainbow trout, a spirulina algal meal could be incorporated at 10 percent of the diet without an effect on performance. In another trout study, a biomass of Scenedesmus almeriensis could replace up to 40 percent of fishmeal in the diet, though growth was on the lower end of acceptable performance.

Nutrient accessibility (i.e. digestibility) for algal meals can be an issue because of the rigidity of their cell walls. To improve meal digestibility, the walls can be disrupted by a variety of methods, including enzymatic (cellulases), chemical (organic solvents or acids), and physical and mechanical (bead milling, high-pressure homogenization or microfluidics). Physical and mechanical methods are generally preferred, as enzymatic and chemical methods can impact intracellular nutrients.

In a recent study, a microfluidizer [technology used to reduce the size of suspensions and emulsions in an efficient way] was used on a Chlorella vulgaris meal and then fed to salmon. The whole-cell meal and the cell-ruptured meal had the same nutrient and protein quality, but the cell-ruptured meal had improved digestibility over the whole-cell meal for EAAs, fats and carbohydrates. Interestingly, starch digestibility was actually higher than that of the control diet.

Yeast and other fungi

Salmon and shrimp have been the major focus of recent yeast feeding trials. For salmon, several different yeast meals have been tested, including from Saccharomyces cerevisiae, Candida utilis and K. marxianus. S. cerevisiae was found to be a poor protein meal, while C. utilis and K. marxianus could replace up to 40 percent of the fishmeal in diets without effecting growth performance or nutrient retention. In a follow-up study, the researchers investigated whether C. utilis could overcome soybean meal induced enteritis, a common side effect in carnivorous aquacultured species, but when fed a diet consisting of 40 percent soybean meal and up to 20 percent C. utilis meal (replacing wheat gluten and starch), the fish still displayed signs of enteritis.

For L. vannamei shrimp, several S. cerevisiae products were successful in replacing fishmeal (from 15 to 24 percent, depending on the product) or soybean meal (up to 24 percent) in shrimp diets with no effect on growth performance. A commercial product was also successful in replacing up to 20 percent of corn protein concentrate. And shrimp fed a diet of about 50 percent C. utilis had no adverse side effects, and actually displayed higher growth rates compared to a complete fishmeal diet.

So far, these studies indicate that C. utilis is a better SCP source than S. cerevisiae for salmon and shrimp diets. Another fungus that has been tested as a SCP source (as well as unsaturated fatty acids, beta-glucan and mannane polymers) is Yarrowia lipolytica. The strain was tested on shrimp and salmon and found to support increase fish weight as the control.

Several different methanotroph-based [methanotrophs are prokaryotes – unicellular organisms without a membrane-bound nucleus, mitochondria or any other membrane-bound organelle – that metabolize methane as their only source of carbon and energy] SCP products have been tested successfully on Atlantic salmon. In one study, salmon fed a diet containing up to 36 percent bacterial protein meal (BPM) displayed a higher growth rate and feed efficiency ratio than the control diet, though nutrient digestibility was reduced. In another study, the authors found that M. capsulatus SCP can make up to 52 percent of the dietary protein in a salmon diet and 38 percent in a trout diet with no adverse growth effects.

Shrimp have also been a key target for bacterial SCP. Inclusion of a novel mixture of two purple, non-sulfur bacteria at 1 percent of the diet produced modest growth improvements over the control, a Corynebacterium ammoniagenes SCP could replace 10 to 20 percent and the commercial product from M. extorquens was able to completely replace fishmeal in shrimp diets. A biofloc meal, prepared from biofloc grown on shrimp farm tanks, could replace up to 30 percent of fishmeal in diets. And a commercial microbial biomass mixture of bacteria and microalgae has been extensively tested on black tiger shrimp (Penaeus monodon). One study suggests it can overcome the growth disadvantages when fishmeal and fish oil are removed from the shrimp diet, and another shows improved growth rates when this mixture is included at 10 percent of the diet.

These studies are highly encouraging of the significant role of SCP in the growing aquaculture industry, as another high-quality protein ingredient applicable across a wide range of species, and several studies suggest additional health benefits to the cultured fish and shellfish.

SCP-based protein meals have the potential to provide the industry a sustainable, renewable feed ingredient to make up for the deficiencies of plant-based meals and reduce the need for fishmeal in aquafeeds. Long held as a promising technology, SCP meals are actually now being commercially produced by a number of companies and, even more promising, is the ever-increasing positive feeding trial data on important aquaculture species, including salmon, trout and shrimp. These data clearly show the positive effects of SCP inclusion in diets and their potential as true commodity products.

While there are still challenges in scale-up, SCP processing and the economics of a commodity product, the progress made in the past several years to find new strains, develop new processes and successfully test on important commercial species is highly encouraging for SCP products. 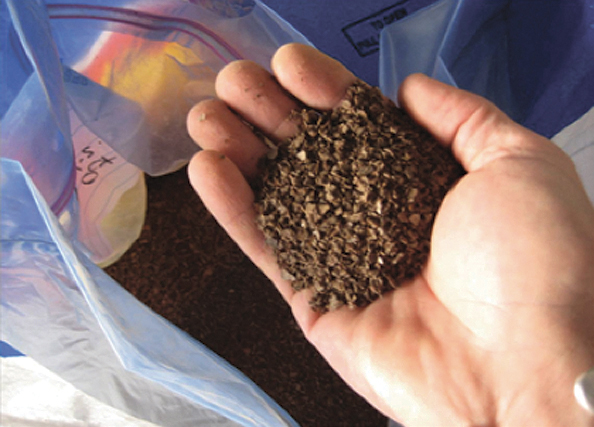 Wastes produced during food processing can be treated to generate a valuable single-cell protein ingredient for aquafeed with protein and amino acid content similar to fishmeal.