Life is like drilling for spa water – you never know which geologic period you’re going to tap into.

In 2011, when Jolanta Gdaniec and Tomasz Karapuda began drilling for geothermal water in Poland, it was for use in a hotel spa. The borehole they dug reached 1,224.5 meters deep.

Within a year, however, the pair diverted their focus to a recirculating aquaculture system (RAS) that would grow Atlantic salmon indoors, avoiding the open-ocean marine environments where conventional producers have encountered disease, sea lice and conflicts with environmental groups.

After securing equipment, a contractor, a plan for the facility as well as bank and EU funding, Gdaniec and Karapuda became president and vice president, respectively, at Jurassic Salmon, a company name inspired by the Lower Jura era from which the geothermal water dates. 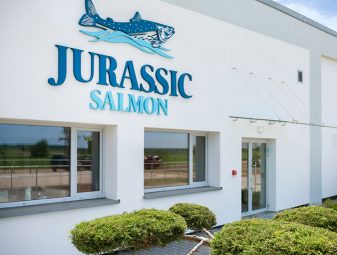 Salmon is one of the top three species produced by European aquaculture facilities, according to the European Commission, behind mussels and trout. Jurassic Salmon’s 2.2-acre RAS farm is now one of three indoor facilities in the world producing salmon from egg to harvest size. The venture also represents a step forward for Poland, which is not among the top aquaculture producers in the EU, like France, the United Kingdom, Greece, Italy and Spain.

The facility is also certified by International Featured Standards (IFS) and the British Retail Consortium (BRC); since the company operates a small processing facility on site, as the fish must be killed and gutted before being sold on.

What Michał Kowalski, deputy production manager and food technologist at Jurassic Salmon, truly longs for is organic certification, and the rise of RAS facilities generally.

“We are organic because of how we work, how the system works, how we treat the environment – [so] we feel that we are. We don’t use chemicals, we don’t have sea lice, we separate the fish feces and send it on to an organic agricultural facility,” Kowalski said.

Jurassic Salmon are also free from stress, he claimed, as they are stocked in low-densities, and without predators.

The process begins with importing batches of 80,000 to 120,000 salmon eggs four times a year, from hatcheries in Norway and Iceland. The rest of each salmon’s life is lived out at Jurassic Salmon: incubation to alevin rearing, through paar and smolt, to adult 5-kilogram weight.

The geothermal water that the fish are farmed in is treated in a denitrification facility before being released to the environment through a controlled process. Nitrogen and phosphorus compounds are removed from the water, which is then reused in the temperature regulation of the facility before the release to open waters. Fish feces are removed from the water and passed on to an agricultural facility to be used as a fertilizer.

To obtain ASC certification, Jurassic Salmon’s facility was evaluated according to several principles, including “the potential impacts on natural habitat, local biodiversity and ecosystem function; to be a good neighbour and conscientious citizen; to protect the health and integrity of wild populations and manage disease and parasites in an environmentally responsible manner.”

The European Commission, which is responsible for the day-to-day business of the European Union, is aiming to boost aquaculture in the EU by reducing red tape, with data from 2016 indicating that most EU states plan to improve procedures, by way of online applications and longer license duration, for example. Eight of 28 European states also indicate prioritizing “elaboration of maps/database/studies to identify the most suitable areas for aquaculture,” and the same number of states plan to focus on how aquaculture is marketed and communicated to consumers.

“Of course farming fish in marine nets will always be cheaper,” Kowalski said, but those operations must deal with external factors such as sea lice, and his experience is that inland fish farms are running successfully, expanding and building more tanks to become a substantial percentage of salmon production.

Current output at Jurassic Salmon is 1,000 metric tons of Atlantic salmon per year. The product is sold to restaurants and distributors who sell within Poland and the rest of the EU. Kowalski is proud high-end restaurants feature Jurassic Salmon on their menus, but he explained that they are now stuck in an awkward phase of growth.

We are organic because of how we work, how the system works, how we treat the environment – [so] we feel that we are.

“At the moment we are too small for the big customers, and we are a bit too big for restaurants only,” he explained. “So we are thinking about increasing production up to 2,000 to 3,000 tonnes per year.”

Kowalski is buoyed about the experiences Jurassic has gained thus far, as the company is approaching its second year of operation. He also envisions the global growth of aquaculture through RAS systems.

“It’s possible to farm salmon all over the world – you don’t have to have fjords,” he said. “All you have to do is build a facility, and then any country in the world can have fresh salmon, all depending on the source of water and technology. It’s the future of aquaculture.”