In the competitive cultured seafood world, “off-flavor” fish can result in consumer dissatisfaction and reduced consumption of a particular seafood product. In the United States farm-raised catfish industry, off-flavor management is taken very seriously because of the need to maintain a high-quality, excellent-tasting product for consumers and corresponding economic implications for processing and production.

For producers, off-flavors can delay farm-raised catfish harvests and result in additional feed costs, interruption of cash flow, and potential catfish loss from disease, possible water quality deterioration, and bird predation during the extended holding period. Additionally, uncertainty about the supply of “on-flavor” catfish during the summer and autumn months when most off-flavor episodes occur can keep processing plants from operating at optimal levels.

The off-flavors of the greatest concern to the catfish industry are those characterized as “musty” or “earthy,” which are produced by certain species of cyanobacteria that grow in catfish ponds. One management approach for controlling musty off-flavor in pond-raised catfish is the application of copper sulfate to reduce the abundance of the cyanobacterium (Oscillatoria perornata). The musty odor is due to the production of 2-methylisoborneol (MIB) by O. perornata.

The main disadvantage of copper sulfate treatment is that the amount of free copper can be affected by water quality variables. Large-scale treatments can become ineffective or increase copper toxicity to levels that kill or stress the catfish or nontargeted green algae. An alternative approach using low doses of copper sulfate applied weekly was tested to evaluate its control of off-flavor cyanobacteria.

In experiments at the National Warmwater Aquaculture Center in Stoneville, Mississippi, USA, low doses of copper sulfate had a positive effect on catfish flavor quality and provided increased net returns to producers. A second study was conducted to evaluate the effectiveness of weekly copper sulfate applications on the prevalence of off-flavor in catfish on commercial farms.

The large size of commercial ponds can make rapid and thorough dispersal of copper sulfate difficult and thus hinder the effectiveness of the treatment. Rapid dispersal is necessary so that copper contacts and is taken up by the O. perornata cells. With slow dispersal, the copper sulfate can rapidly disappear from the water column and end up in the pond sediments, bound and unavailable for use as an algaecide.

While the first study (Tucker et al., 2001) was a controlled experiment using 0.4-hectare ponds, the more recent study was conducted in 3- to 6-hectare ponds on two catfish farms in western Mississippi. Farm managers applied 0.5 mg copper sulfate pentahydrate per liter weekly beginning in the late spring and continued until the water temperature dropped below 20 degrees-C.

Water samples were collected from treated and untreated ponds approximately every three weeks and monitored for levels of MIB, chlorophyll alpha, and phytoplankton community structure and abundance. In addition, catfish from each study pond were checked for off-flavor during the third year of the study.

Levels of MIB and the abundance of O. perornata were significantly reduced in the treated ponds at one farm, while the numbers of green algae and diatoms, the preferred type of phytoplankton in catfish ponds, increased significantly at both farms. The overall prevalence of all types of off-flavor was reduced by 50 percent. Thus, weekly low-dose applications of copper sulfate appeared to be beneficial in mitigating musty off-flavor problems in commercially produced catfish.

The cost of applying crystalline copper sulfate during the mid-July through mid-September period was estimated at U.S. $7.09 per application per hectare. Based on the collected farm data, the number of estimated off-flavor delay days for each pond treatment became the basis for quantifying additional operating costs during the extended harvest delay periods.

Fish sampling results were used to hypothetically determine if fish in a particular pond could be harvested. A “counting” methodology was developed in which the count of off-flavor days began with the detection of off-flavor and lasted until the next off-flavor testing occurred. Resulting harvest delays were summed over three sampling dates and used in estimating periodic and overall costs. 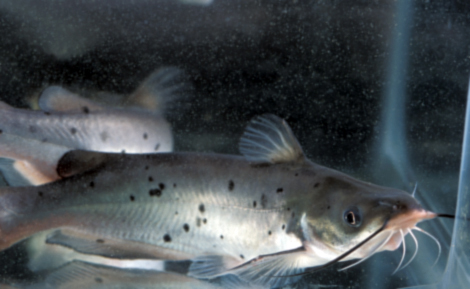