The IMTA approach is that recycling of waste nutrients results in less nutrients being released into the environment, while the overall productivity of the system increases. This approach fits well within the global ambition for circularity in food production, which strives to minimize energy and nutrient losses and maximize resource use efficiency, by closing the nutrient loop.

There is a strong need to quantify waste flows through IMTA systems and to understand the factors that influence nutrient retention efficiencies. This will help in identifying options for enhancing bioremediation within IMTA systems.

This review summarizes a large body of peer-reviewed literature on IMTA, with focus on quantifying nutrient retention by extractive species fed fish waste, under different degrees of system openness. To quantify nutrient retention efficiencies, literature was collated on eco-physiological responses, including nutrient utilization processes, of extractive species fed fish waste. Nutrients retained in extractive species biomass can subsequently be harvested from the system, and these numbers can be used to define the overall bioremediation potential of the system. For a detailed description of data collection and analyses, refer to the original publication.

Biological factors are independent of system openness and are influenced by waste quality and the physiological responses of extractive species feeding on waste nutrients. None of the species included in our conceptual IMTA extracts dissolved organic matter (DOM), resulting in a small non-retained fraction of 3 percent N, 8 percent P and 3 percent C (Fig. 2). Marine DOM represents the largest ocean reservoir of reduced carbon, and due to its key role in the global carbon cycle, the role of DOM in marine ecosystems has been studied extensively.

Environmental factors influence the connectivity between waste nutrients and the extractive species. For closed systems, it is assumed that this connectivity is optimal, and these factors are therefore more relevant for open and semi-open systems.

The capture efficiency of bivalves depends on particle size and exposure time. To be captured, waste particles should fall within a species-specific size range; the blue mussel (Mytilus edulis) efficiently filters particles between 3 and 1,000 µm; the Pacific giant oyster (Crassostrea gigas) efficiently filters particles between 5 and 541 µm. Little is known about the fraction of waste particles that fall within the bivalve filtering size ranges. Studies on waste particle sizes in land-based fish farms reported ranges between 8–269 µm (salmonid hatchery) and 8–512 µm (trout farm) for the suspended solids.

For specific combinations of fed and extractive species, seasonal factors can result in a “mismatch” between nutrient release and uptake, and various authors have described this. For example, waste production by salmon fluctuates seasonally, and highest release rates are at the end of the summer, when kelp is already harvested. To survive high and low temperatures, various sea cucumber species undergo aestivation, hibernation or both; some species stop feeding during winter and summer, resulting in a mismatch between the highest waste release by the fed species during summer.

Integration of extractive species to fish cultures has practical implications, such as a requirement for a greater farm area. Upscaling to a commercial salmon farm (production of ~1,800 tons over a 2-year cycle and an average feed conversion ratio of 1.1) would in the best case scenario require (i) 47 ha of seaweed, (ii) 12 ha of bivalves and (iii) 237 ha of deposit feeders, assuming that extractive species are harvested yearly. Studies modelling the seaweed and bivalve compartment in open water IMTA already highlighted that large areas are required, which has major implications for the spatial design of IMTA systems.

The addition of extractive species to land-based fish farms will increase pressure on space. While closed and semi-open systems can be designed to optimize connectivity between waste and the extractive species, in open systems the spatial arrangement determines connectivity. With the trend of moving fish farms to deeper and more exposed locations, it is expected that the affected benthic area becomes larger.

In open-water fish cage systems, contrary to consensus, extractive species should not be cultured directly alongside the fed species. This is partly because they may hinder the optimal functioning of the system by, for example, making it difficult to access the cages by boat to feed the fish. It is also because inorganic and suspended waste is rapidly dispersed by currents. Therefore, the extractive species in the water column, that is, seaweeds and bivalves, simply need to be located in the area of nutrient dispersion.

Thus, in open water IMTA, the bioremediation potential of extractive species could be evaluated at a more regional scale, creating a balance between nutrients excreted by the fed species and nutrients harvested via the extractive species. Such a “balance approach” allows to evaluate “connectivity” between the different functional groups at a larger scale than farm level.

Using this approach raises the question of where to establish the boundaries in evaluating IMTA performance. It has been shown that growth of seaweeds and bivalves is only significantly enhanced, compared with reference stations, when cultivated within tens to hundreds of meters from fish cages. Using the balance approach for open water IMTA designs, growth enhancement of extractive species (compared with monocultures of seaweeds and bivalves) should therefore not be expected.

Based on the highest nutrient use efficiencies reported in the literature, we demonstrated that a theoretical maximum nutrient retention potential of 94 percent for C and N and 79 percent for P administrated with the fish feed is possible in IMTA systems containing salmon as fed species and kelp, mussels and polychaetes as extractive species. These percentages, however, solely consider the nutrients applied to produce fish, estimate use efficiency of extractive species based only on assimilation efficiencies, and assume no ambient nutrients complement waste nutrients from fed fish for extractive species. These percentages also consider that a small fraction of fish waste is DOM, which extractive species included in our salmon-kelp-mussel-polychaete IMTA cannot use.

The theoretical maximum nutrient retention potential, however, does not account for the feeding metabolism of extractive species. When doing so, the retention efficiencies decrease to 65–75 percent for N, 65 percent for P and 45–75 percent for C with the fish feed still being the only nutrient input to the IMTA, which is the case for an IMTA operated as a closed system.

In semi-open and open systems, limited control over environmental factors, including exposure time to waste nutrients, presence of ambient nutrients influencing food preference and assimilation efficiencies of mixed diets by extractive species, seasonal mismatches between nutrient supply and food requirements, and sub-optimal spatial arrangements reducing nutrient access of extractive species, lessens the retention efficiencies that can be achieved to 50 percent for N, 40 percent for P and 40–50 percent for C, administrated with the feed to the IMTA system (Fig. 1).

In most cases, for open IMTA systems the nutrient retention efficiencies are still overestimated, as maximum retention efficiencies reported in literature were used. This makes it attractive to apply a “mass balance approach” over a larger production area, aiming to extract the same amount of nutrients that were fed to fish cages with the nutrients contained in biomass gain of harvested fed and extractive species.

An advantage is then that different species can be cultured independently, allowing to optimize production while minimizing temporal and spatial mismatches. A disadvantage is that fed nutrients and nutrients retained by extractive species are not fully the same, and that local pollution or nutrient shortages may become an issue if the design and local conditions are not carefully investigated. 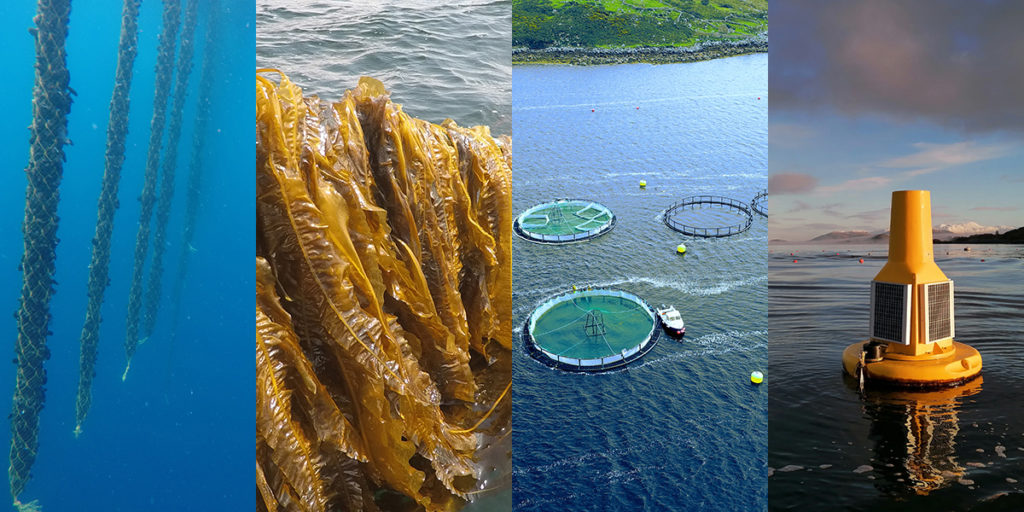