On the shores of Lake Cahora Bassa, Mozambique, a tilapia farm is quietly making waves. The ripple effect that Chicoa Fish Farm hopes to start in these waters could improve not only the local fish supply, but also the prospects for people in an impoverished region of Southern Africa.

Gerry McCollum and business partner Damien Legros have many combined years of experience working on fish farming in southern Africa. But it wasn’t until 2012 that they decided to “make a proper go” at commercial finfish culture in Mozambique. Now they are creating a blueprint – a vertically-integrated fish farm – for other small-scale farmers to emulate.

Most entrepreneurial ventures require a measure of courage, but tackling something new in a remote country with little supporting industry takes a special kind of mettle. Chicoa is fortunately well-sited, with access to Tete’s urban center and other markets across the region, including Blantyre, Lilongwe, Harare and Beira.

The site is also particularly good for aquaculture, and the company is getting excellent results on their fish. The water is deep close to the land, which makes it easier and more cost-effective to supervise their cages.

“It’s in a bay which is protected, so even though we have good water exchange, we’re not exposed to the worst of the elements,” said McCollum.

Chicoa is farming Oreochromis niloticus, more commonly known as Nile tilapia. These shoaling fish are social and territorial, and although omnivorous, they feed on a primarily vegetarian diet. They’re also robust, good breeders and well-suited to the farming environment.

An engineer by training, McCollum moved to Africa in 1995 and has extensive experience working on the continent – from rebuilding tea estates in Uganda, to designing and managing a feed plant and processing factory in Zimbabwe.

He said Chicoa’s first few years were particularly difficult. It was a virgin site and the initial time investment was high. It took two years to secure the land and licenses to farm.

“We chose the site not really because it was an easy start, but because it was the right long-term location,” said McCollum. Yet despite their vast professional networks, the partners struggled to get investors on board.

“Nobody would touch us. And we reached out to everybody we could think of, which was just about everybody in the industry,” said McCollum.

It was a high-risk venture: a greenfields project in a developing country. Chicoa ultimately approach Aqua-Spark, a Netherlands-based investment fund that focuses exclusively on sustainable aquaculture. The company turned them down at first, but later decided to bite. With this investment, Chicoa set up its first cages in 2015.

“We’ve put 24 cages into the water and have a breeding set up on the lake,” said McCollum. There are also nursery tanks on land.

The company is now raising funds to increase its capacity to between 2,000 and 3,000 metric tons per year. It will also put in a processing facility and build up its land infrastructure.

“We’ll have offices and feed storage and workshops and all of that, because that doesn’t exist at all,” said McCollum.

Chicoa mainly sells its tilapia whole and round on ice in Mozambique, but also exports to Zambia and Malawi. And the market growth potential is clear, because Africa needs protein.

With increasing pressure on fish stocks, capture fisheries simply cannot meet the demand. According to the 2018 State of the World Fisheries and Aquaculture report released by the Food and Agriculture Organization of the United Nations (FAO), Africa is importing around 40 percent of the fish it consumes, despite its rich natural resources. FAO is concerned about regional food security.

“In Africa, per capita fish consumption is expected to decrease by 0.2 percent per year up to 2030, declining from 9.8 kg in 2016 to 9.6 kg in 2030, as a result of population growth outpacing supply,” the report stated. “The decline will be more significant in sub-Saharan Africa (from 8.6 to 8.3 kg during the same period).”

The Southern African Development Community (SADC) is an inter-governmental organization established by treaty in 1980. Its member states want to promote stability by alleviating poverty and stimulating economic growth. As such, the SADC recognizes the importance of fisheries and the aquaculture sector to the region.

In 2016, the organization released a fisheries fact file for Mozambique. At the time, more than half of the country’s population of 27 million people were surviving beneath the poverty line, and per capita fish consumption was at 9 kg per person.

The SADC’s figures also show the country produced 222,822 tons of fish per year, but only 721 tons were cultivated. And although 400,000 people were employed by the fisheries sector, a mere 922 of these jobs came from aquaculture.

The sector is grossly underdeveloped, and Mozambique mainly produces prawns, along with some tilapia and seaweed. Giant tiger prawn (Penaeus monodon) production nearly got wiped out by white spot syndrome virus (WSSV) about 15 years ago.

Launching a business in a developing country in Mozambique has its challenges, ranging from poor infrastructure, to low-skilled labor, bureaucracy, and a lack of supporting industry or institutional framework.

“Being a first mover, there’s no legislative structure for you to slot into, and the administration works in silos,” said McCollum. “You’re having to join the dots, because it doesn’t exist, and that’s really hard.”

Chicoa has however successfully moved into the next phase of its development. It has a new CFO, Jayson Coomer, and a joint venture partner in Malawi handling sales.

“As the business grows, each iteration becomes less risky. There’s more work to do, but it’s easier. The chance of failure is much less as you move forward,” he said. “You’ve got momentum and you start building a team.”

Around 40 to 50 employees are now on the payroll. Chicoa will also be training and assisting other entrepreneurs to become out-growers or third-party farmers.

The company plans to stay in the value chain by expanding production to around 5,000 tons per year, but will build a hatchery and feed plant of around 20,000 metric tons each. New farmers will then be given everything they need, from fingerlings, feed, training and equipment, to possibly even financial solutions.

“If somebody wants to start a farm and do one or two hundred tons per year, it’s very difficult, unless we can come along and give them a package,” said McCollum.

A small settlement called Emboque lies next to the farm. The area is remote and the people are poor. Many do not have schooling and eke out their livings as subsistence farmers or fishermen. For these people and others across the region, an aquaculture model like Chicoa’s might well offer the chance at a more secure, and even prosperous, life. 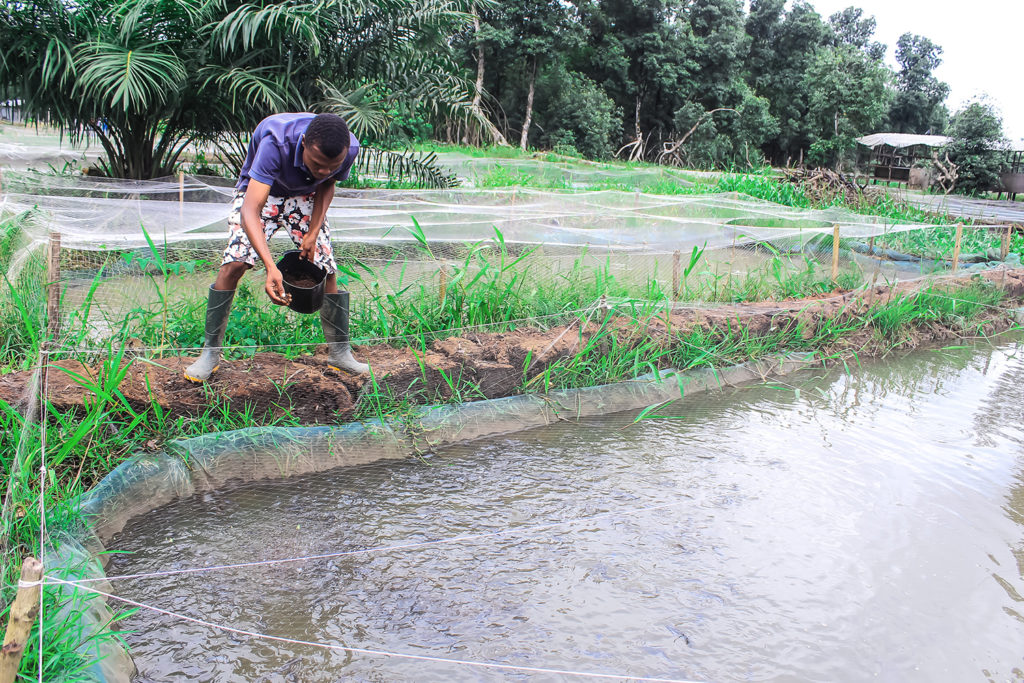 From small fry to big fish for Nigerian catfish farmer

The 28-year-old founder and CEO of Tajin Farms – a catfish supplier and processing operation in Warri, Delta State – talks about his humble beginnings and bold plans for aquaculture in Africa.