Although RAS have generated much interest in recent years, their main disadvantages are their high capital and operational costs. To offset these costs, efficient system designs are needed to produce high-value, high-demand species. One area to control expenses is the use of inexpensive polystyrene microbead filter media in biological filters for the systems.

Nitrification is the process that biologically converts ammonia to nitrite, and then relatively harmless nitrate. Biological filters contain media that harbors nitrifying bacteria to perform this task. The nitrification rate of these bacteria is inhibited by seawater due to its high chloride content, and free ammonia and nitrite ions.

Commercially available biofilter media is generally costly. To help evaluate efficient system designs, the nitrification rate of an inexpensive polystyrene microbead filter media described by Greiner and Timmons in 1998 was examined in a near-commercial- scale marine RAS used for grow-out of summer flounders.

Polystyrene microbeads are small styrofoam beads with a mean diameter of 1-3 mm and estimated surface area of 1,145-3,936 square meters per cubic meter depending on bead diameter. In this study, the microbeads cost U.S. $9.30 per cubic meter, whereas an equivalent moving bed media would cost approximately U.S. $1,112 per cubic meter. The high surface area and low cost of this media make it a good candidate for biological filter media.

The authors recently conducted grow-out studies of summer flounder fingerlings at the University of North Carolina Wilmington Center for Marine Science in Wilmington, North Carolina, USA. The microbead biological filter was concurrently evaluated for use in marine recirculating systems. The system design was based on the North Carolina State University Fish Barn model (Fig. 1). The RAS consisted of two groups of tanks, each with two 11.3-cubic-meter circular fiberglass tanks of 4.6-meter diameter and 0.7-meter depth.

Each group was supported by an independent recirculating system. Each tank contained a center double drain fitted with an 11-l sludge collector. The effluent stream was treated with a rotating drum screen filter utilizing a 60-μ screen to remove fine solids. The filtered water was then distributed over the biological filter through a perforated distribution plate. The biological filter media consisted of 0.53 cubic meters of 3-mm polystyrene microbeads with an estimated specific surface area of 1,145 square meter per cubic meter.

A total of 2,028 summer flounder fingerlings of about 85 grams were stocked into two 11.3-cubic-meter tanks and fed a 50 percent-protein, 12 percent-lipid floating flounder diet.

To test the nitrification rates of the microbead media in the marine microbead filter, total ammonia nitrogen (TAN) levels were measured from the influent and effluent biofilter water streams. Samples were gathered every two to four hours on four days during the 700-day growout experiment while fish were at different average weights. Volumetric nitrification rates (VNR) were calculated as:

Polystyrene microbeads can be used as an effective marine biological filter media in recirculating aquaculture systems. The filter design as tested was able to maintain acceptable TAN and nitrite levels during a 700-day study. The extremely low cost of polystyrene microbeads should provide an incentive to perform more research for filter designs and more extensive nitrification studies.

Because the media is extremely small and lightweight, extra care is needed when designing the media’s housing. The beads can find their way out of any gap and into other parts of the system, where they can cause equipment to malfunction. Also, because it is a static bed, the media eventually begins to collect solids. Proper solids filtration must be placed before the biological filter, and an effective mechanical or hydraulic way to stir the bed should be employed. 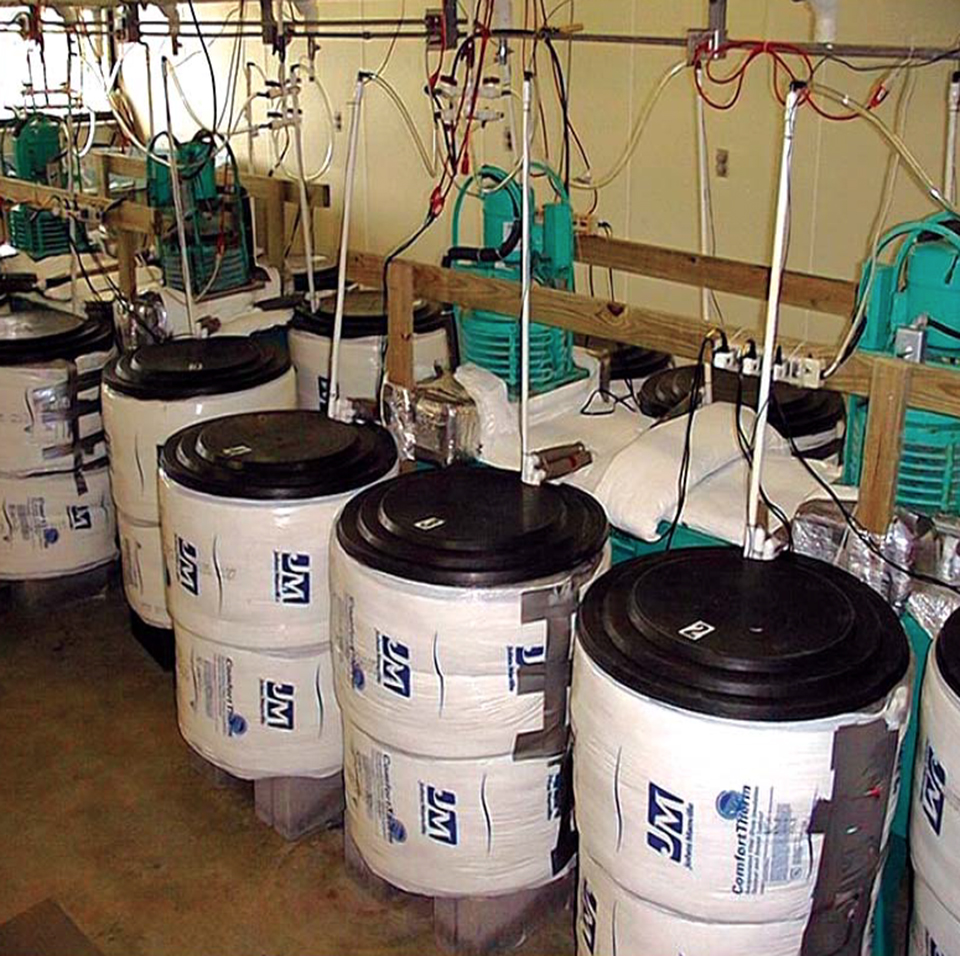 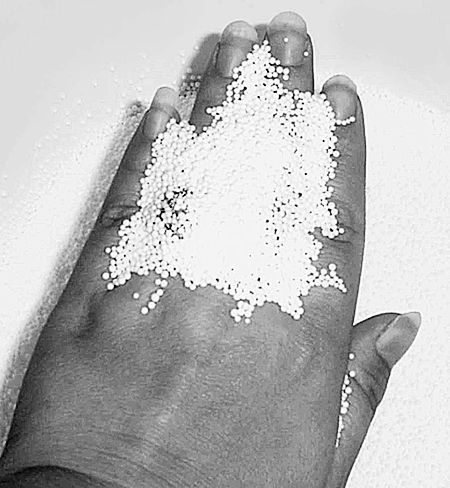 Microbead filters are an effective filtration solution that can be scaled to large production systems at a lower cost of operation than fluidized-sand bed filters.