A potential, unconventional approach to pathogen control in aquaculture

Viral, bacterial and parasitic diseases remain the first constraint to aquaculture sustainability, with the industry’s annual losses globally reaching into the billions of dollars. Fighting the pathogens first requires their identification, but once a pathogen is known, finding the right preventive measures or treatments is a long process. There is still a broad gap between the scientific results and the actual needs of the farmers.

The toolbox of preventive measures is mainly based on the biosecurity concept, which is to avoid the introduction of pathogens into the culture systems by exclusion, sterilization, the use of specific pathogen free seedstock (SPF) and other measures. But the result is often naive fish juveniles that are not adjusted to the external environment.

The aquaculture industry has developed different products to enhance the health of cultured organisms through the use of probiotics and immunostimulants to help them support the pressure of the environment, including their culture systems. Vaccines have been progressively developed against some pathogens, but they are costly and take years before being licensed and available, and if viruses are mutating, they need continued adaptations. Other improvements have resulted from selective breeding programs developed for growth, but most programs are still developing disease resistance.

The various approaches to deal with disease often are confusing to many farmers; although some approaches are helpful to contain opportunistic pathogens, the most harmful ones are often successful in entering their culture systems. And the full biosecurity “kill everything” and the “pathogen-free” approaches can often reach their limits, which is demonstrated by the frequent resurgence of some known diseases in areas normally free of them, as well as the regular emergence of new pathogens.

A recent concept of looking at the pathogens in their whole environment, the pathobiome – representing the pathogenic agent integrated within its biotic environment – could shed new light for pathogen control.

Learning with pathogens in the field

My experience with aquaculture pathogens is linked with my involvement in shrimp farming development in most of the tropical countries for more than 20 years. During this time, I directly confronted the emerging Yellow Head Virus (YHV) in Thailand, the White Spot Virus (WSSV) in Sri Lanka and the Infectious Hypodermal and Hematopoietic Necrosis Virus (IHHNV) in Mexico.

I was also involved for 16 years in an integrated Asian sea bass (barramundi) farm located in an optimal environment, including coral reef water without pollution, excellent and constant water temperature (29 degrees-C), salinity (~33 ppt) and dissolved oxygen at saturation, with significant water exchange and no other farm close by. The broodstock system, under a selective breeding program – together with the hatchery and nursery – were all located in a small island and the grow-out phase was based in large, open sea cages around it.

Yet this is an example of a fish farm located in starting in the best environment possible, but where several pathogens almost immediately affected the fish, killing about 90 percent of the juveniles, batch after batch. We implemented several measures, including complete UV treatment of the culture water, regular facility dry-out, use of immunostimulants and trials with antibiotics, none with a permanent positive effect and always experiencing a significant iridovirus outbreak after transferring the fish from the nursery to the grow-out cages.

We already knew some of the pathogens, but others were emerging. For many years, we fought the Viral Nervous Necrosis (VNN) – also known as viral encephalitis of fish – during the early larval stages, and also an emerging bacteria (causing the “big belly disease” when the fish were between 0.5 and 5 grams and an iridovirus from 5 to 80 grams. The bacterium Tenacibaculum maritimum was also present from the early juveniles to the pre-growing cages, and the bacterium Streptococcus iniae affected the fish from the nursery to adult size. The fish were also affected by the flatworm Benedenia, but only in the grow-out cages.

We were able to develop a Streptococcus vaccine through strong cooperation with a major commercial fish health company, and we also used different antibiotics and drugs in bath or in the feed, just like everybody else in our situation did. We found out that the only effective, long-term treatment to control T. maritimum in the nursery and Benedenia sp. in cages was peroxide baths.

But regardless of our efforts, the juvenile production remained erratic, with results worsening over time, and with increasing pathogen pressure as fish biomass was increased in the grow-out cages.

Then in 2007, a chance effect happened: The heating system went wrong in one larval tank and the water temperature increased to more than 35 degrees-C. Surprisingly, the larvae – which were suffering an outbreak of VNN – began to recover.

A systematic exploration of this effect on the “big belly disease” and the iridovirus was undertaken, and after many trials and errors, we adapted protocols to each pathogenic situation. One disease-one pathogen was definitely too simple an approach to deal with our fish health issues, aswe were facing a complex system with various pathogens acting at the same time, in synergy in a changing pathobiome that permanently distorted the clinical signs.

Our observations showed that non-lethal thermal shocks were ending the fish mortalities and were initiating an acquired resistance before the next pathogen encounter, in essence a “live vaccination.”

The underlying mechanisms are linked with the anti-stress responses of the heat shock proteins (HSP), which have been evolutionarily retained and passed on from bacteria to higher vertebrates because they are the main defense mechanisms of all the organisms to survive among the constant presence of evolving pathogens.

Innate immunity is the first reaction against pathogens, with the recognition of pathogen-associated molecular patterns (PAMPs) through toll receptors and others. These HSPs are induced at the cell level and have intracellular and extracellular expressions.

Intracellular HSP are companions for other proteins stabilizing cells against pathogen injury in reestablishing proper folding and homeostasis. And extra cellular HSPs are intercellular, signaling molecules that regulate the immune response, which induce specific immunity to infectious agents promoting several biological pathways to control the effect of pathogens.

It appears that the non-lethal heat shock may increase the HSPs effects – as well as those of other biological pathways whose interactions are poorly understood – on pathogens. They can provide the hosts the time needed to react and to counteract their pressure, and they are largely up-regulated when thermal shocks are effected near the lethal temperature, with effects lasting for 24 hours.

From theory to reality: Non-lethal heat shock and the pathobiome

Systematically applying non-lethal heat shock targeting the local community of pathogens can be helpful to many aquafarmers and very cost-effective in comparison to the vaccines, if they are available. And knowing the pathogens is not as important, as the treatment can be effective to control mortality outbreaks early on.

Treated juveniles acquire protection against the local pathogens, and this will be in line with potential mutations or changes in serotypes (groups within a single species of microorganisms, like viruses or bacteria, that share distinctive surface structures). If there are several pathogens acting in synergy, the HSPs can impact all of them, assimilating permanently into the pathobiome.

The non-lethal heat shock has not only an effect on the pathogens and on the hosts but also on all the other organisms present in the culture system, and particularly on all the bacteria from the gut of the organisms, the water or the biofilms. The relations between host and microbiome (all the microbes in a community) are essentials for the health of the organisms, but are complex, and the only way to assess the effects on such a system is the final result: the level of mortality.

At the field level, I advocate the use of this approach to produce fish juveniles of different species like tilapia, barramundi and grouper in the presence of VNN, as well as several iridoviruses and also the Scale Drop Disease (SDD). A recent trial with tilapia juveniles suffering the emerging Tilapia Lake Virus (TiLV) has been positive. And it also appears that when fish are suffering from a virus infection as well as some secondary bacterial effects like fin rot, the heat shock treatment is effective on both.

The objective is to toughen up the fish juveniles before their transfer to grow-out cages, to avoid disease outbreaks following the introduction of naive juveniles into a given pathobiome that is evolving in space and time.

How to do it

The first step is to determine the lethal treatment temperature according to the species and the stage of development of the animals. Water should be pumped directly into the nursery without any treatment (unless some pesticide or heavy metals toxicity is detected), and the juveniles should be immersed in the pathobiome. Water in the tanks should be heated near the fish lethal temperature, which for tropical fish is around 40 degrees-C. A general rule of thumb is about 10 degrees-C above the optimum temperature of the species.

The farmer’s knowledge about the clinical signs of disease outbreaks and the dynamic of the observed mortalities are critical to recognize the early signs of an outbreak, because the correct timing of the treatment is essential to maintain the initial mortality at low levels. Depending on the pathogens and the timing of their emergence, different treatment protocols can be applied at a given frequency for a certain period of time, generally for one week. This is a totally different health management strategy than to just kill/sterilize everything first.

Concurrent with fish experiments, we have also carried out other trials with the same approach for pathogen control in invertebrates, like WSSV in penaeid shrimp and with encouraging results; in oysters for the herpes virus; and with sea cucumbers for Skin Ulceration Disease. However, until now, protection for invertebrates is only acquired for a short period of time and does not last long enough to provide the full protection necessary for commercial production.

On fish like Asian sea bass and tilapia, several viruses and bacteria could be controlled by non-lethal heat shock treatment, resulting in more resistant juveniles.

The benefits of the treatment are seen relatively fast, and the results obtained so far could be applied to other pathogens and other fish species. Feedback from people already using these non-lethal heat shocks on a commercial level are encouraging, producing juveniles resistant to local pathogens.

Currently, there is not enough return on experience because very few farms are using this approach, and for a simple reason: you need to introduce the pathogens in your culture systems, which goes against all accepted biosecurity principles.

My objective is to challenge pathologists on the application of a simple temperature manipulation to boost the innate immune system through the upregulation of the HSPs. Much supporting scientific data are available in the scientific literature, and in fact, hyperthermia treatment is increasingly used in human cancer therapy. 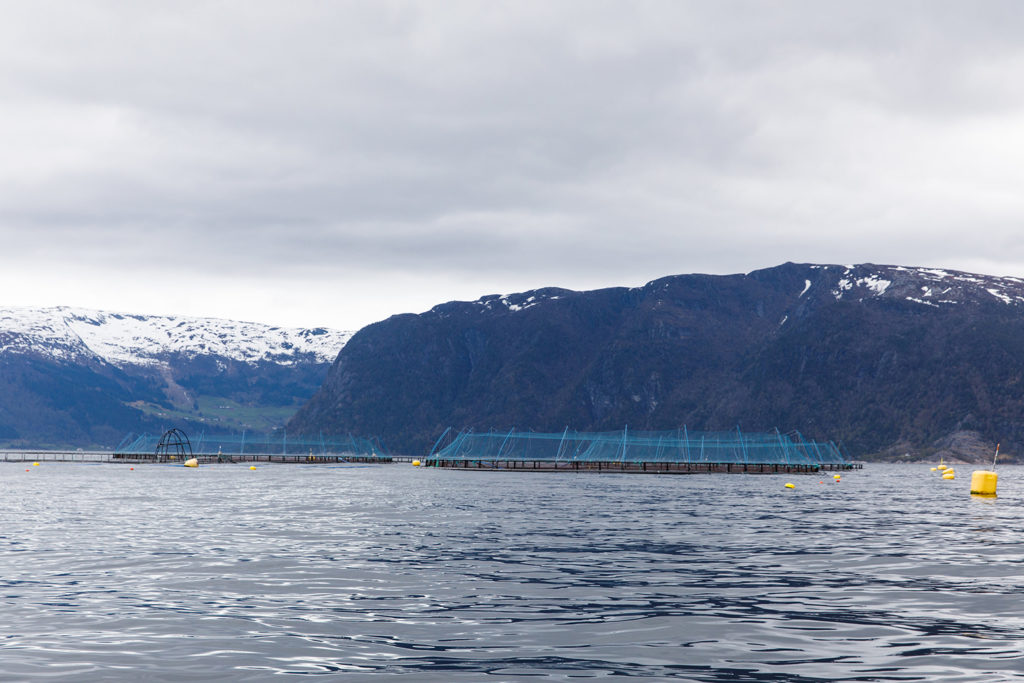 Focused on land-use implications of terrestrial meat production, the study concluded that aquaculture can meet the protein demands of a growing global population without adding strain on arable land, water or our other natural resources.