These stressful conditions reduce gamete quality, reproductive performance and hatchery efficiency. In general, stress and reproduction have a reciprocal relationship in teleosts. One mechanism through which stressors affect reproductive capabilities is via the endocrine stress system.

Activation of the hypothalamic-pituitary-interrenal axis is a universal reaction to stressors. It consists of a hormone cascade culminating in the release of corticosteroids from the interrenal cells into the blood stream. Cortisol is the predominant stress steroid of teleosts, and plasma concentrations of this hormone elevate during stress.

Precise timing of ovulation in hormone-induced channel catfish is presently not known. Ovulation typically occurs 26 to 40 hours after the hormone injection. When hormone-injected fish are communally held in tanks, each fish must be repeatedly captured and handled to check for ovulation.

This is a critical period. Stress affects the reproductive performance of broodfish, progeny performance and the survival of the post-spawned fish. Therefore, there is a need to develop procedures to minimize the stress on pre-spawning broodfish during latency, the period between hormone injection and ovulation.

An alternative to the communal holding of hormone-injected broodfish is to suspend individual fish in soft, nylon mesh bags. This procedure offers several advantages. Each bag is marked to identify a specific fish, and handling associated with sorting and weighing is minimized. In addition, the bags facilitate observation for ovulation.

Four-year-old, fully mature and gravid channel catfish females, produced and raised at the United States Department of Agriculture – Agricultural Research Service Warmwater Aquaculture Research Unit in Stoneville, Mississippi, USA, were used in the study. Groups of fish were hand selected from a broodfish pond at weekly intervals. The catfish females were weighed individually and randomly placed in a marked mesh bag or held communally in a concrete tank. The marked bags were suspended in an adjacent concrete tank that was also supplied with water and air.

The communally held fish were crowded, and individual fish were removed and placed in a mesh basket to determine their weights for injecting precise quantities of hormone. Channel catfish females were each injected intraperitoneally at the base of their pectoral fins with a priming dose and a later resolving dose of gonadotropin-releasing hormone. Blood samples were taken, and the plasma was stored for measuring cortisol and estradiol.

Twenty-six to 40 hours after receiving hormone injections, the fish were removed and observed for ovulation by slightly pressing near the oviduct vent to observe for eggs. Females suspended in bags were slightly lifted to observe for the presence of eggs on the bags. The ovulating females were anesthetized before being stripped. The eggs were counted, fertilized with sperm, water hardened and suspended in hatching baskets until hatching.

Three spawning trials with 20, 21 and 22 broodfish were conducted to evaluate the two holding methods. The plasma cortisol concentrations, which indicate stress levels, of the catfish were initially high in both groups. The cortisol levels remained higher in the fish held communally during the latency period. However, the cortisol concentrations decreased at 16 and 36 hours post-hormone injection in catfish held in bags (Figure 1). The percentage of females ovulating in response to hormone injection did not differ between the fish held communally and those suspended in mesh bags.

The plasma cortisol concentrations of communally held fish were high throughout the latency, as the fish were periodically crowded, handled, removed for injection and checked individually at three-hour intervals for the release of eggs. The quality of the stripped eggs from fish held in bags was slightly better than that of the eggs from the communally held fish.

The mean relative fecundity and fertilization rates of eggs were similar in both the holding groups. However, the mean hatching percentage of hybrid catfish eggs and number of hybrid fry produced from the channel catfish females suspended in bags were higher than for the fish held communally in a tank during latency (Table 1).

Maturation and ovulation are not synchronized in channel catfish. Therefore, ovulation of individual catfish cannot be predicted in hybrid catfish hatcheries. Based on this research, suspending hormone-injected broodfish in individual bags facilitated the identification of ovulating females during latency and may have improved the quality of the stripped eggs, promoting higher hatching success and fry production. Eight of the 10 hatcheries engaged in hybrid catfish fry production in the U.S. have adopted this method.

Even though suspending individual fish in mesh bags incurs additional expense for spawning bags, additional hatchery resources and labor, the increased hybrid catfish fry production negates the additional expense. The reduced stress levels in broodfish may also lower post-spawning mortalities. This method appears to be suitable for inducing spawning in other fish species in which repeated handling, multiple injections and period checking for ovulation are involved. 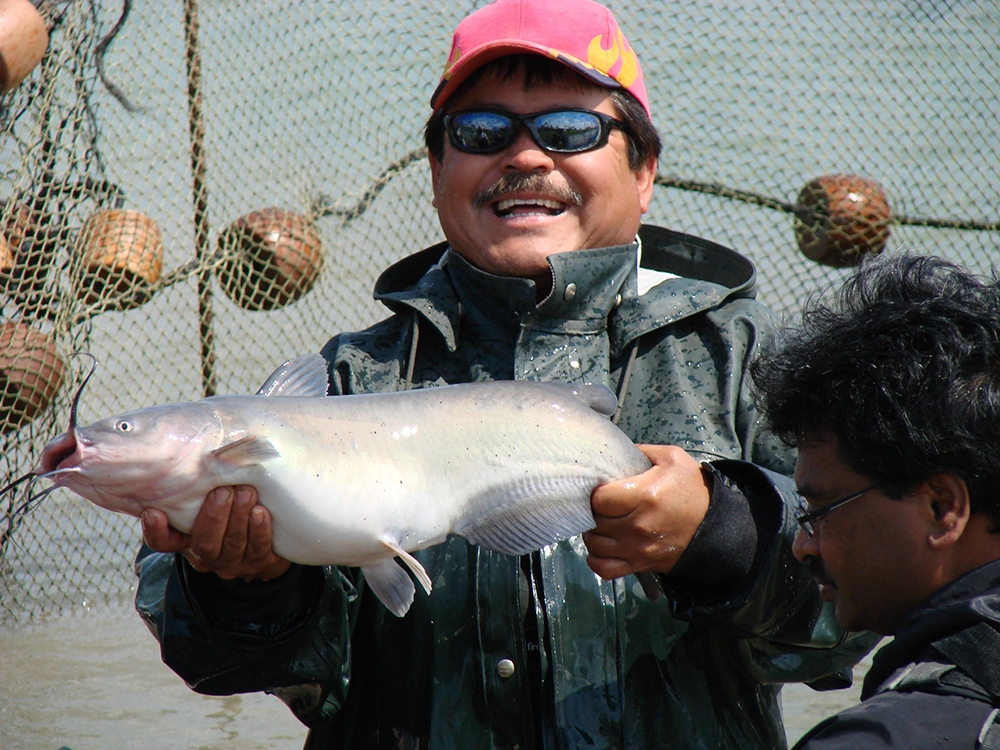 This study evaluated the feasibility of a portable, hand-held micro near-infrared spectrometer to objectively determine the stage of maturity in channel catfish. Such a rapid, non-invasive method to stage fish maturity in hatcheries would improve the efficiency of hatchery production.