In 1997, the United States Food and Drug Administration (FDA) approved the irradiation of red meats. Today, we know that low doses of radiation can kill or inactivate 99.9 percent of Salmonella in poultry and even a higher percentage of Escherichia coli 0157:H7 in ground beef.

Food irradiation is defined by the World Health Organization (WHO) as a process in which foods are exposed to predetermined levels of radiation energy through a radioactive source (cobalt 60 or cesium 137), electron beams, or x-rays generated in electrically driven accelerators.

Cesium 137 comes from unproc-essed and encapsulated sources in the U. S. government’s stockpile of byproducts from nuclear energy and nuclear weapons production programs. Cobalt 60 is produced via the neutron bombardment of naturally occurring cobalt 59 and is not associated with weapon technologies. Cobalt 60 is used in cancer therapy, diverse industrial processes that include sterilization polymerization, and the production of radiation-induced material effects such as hardening and coloration.

Irradiated food products can not become radioactive for two reasons. First, at no time during the process does the radiation source come in contact with the food. And second, the energy of the source is far too low to affect atomic protons and neutrons, the displacement of which causes radio-activity.

The public is generally unaware of the fact that small levels of radioactivity from such sources as radium 226, radium 228, carbon 14, rubidium 87, polonium 210, uranium 234, uranium 236, and potassium 40 are naturally present in foods. It has been reported that nearly 25 percent of the radiation received by all cells is from potassium 40, which is present in approximately 0.01 percent of total body potassium.

Research on the application of ionizing radiation to foods began in the 1950s. However, the passage of the Food Additives Amendment to the Food, Drug, and Cosmetics Act in 1958 resulted in irradiation being considered a “food additive” process. Consequently, FDA was required to perform a premarket review prior to authorizing ionizing radiation for specific food applications.

During the FDA review period, many individuals and nongovernmental organizations opposed irradiation because they considered the process unsafe. Their concerns were primarily over the formation of free radicals and solvated electrons in food during irradiation. But in fact, no unique toxicologically significant products have been found in irradiated foods.

The effects of irradiation on foods have probably been more thoroughly investigated than those of any other food-preservation process. The FDA has concluded that unlike other methods of food processing and preservation, irradiation does not present any danger to consumers. It approved the process for the products listed in Table 1 and established recommended doses.


The National Fisheries Institute, Inc. is a partner in two petitions to the FDA that request approval for the irradiation of molluscan and crustacean products to a maximum of 2 kGy (200,000 rads) for pathogen removal. A 1989 report by the Council for Agricultural Science and Technology estimated a radiation dose of 1kGy would break fewer than 10 chemical bonds for every 10 million bonds present. Cooking or applying infrared radiation produces similar changes in chemical bonds. However, heat sterilization destroys or changes a much larger percentage of the basic food than irradiation.

The formation and condensation of aromatic rings and heterocyclic compounds do not occur in irradiated food. These reactions – known to take place at cooking temperatures – can form toxic carcinogenic compounds.

Irradiation causes chemical changes in food in amounts directly related to the irradiation dose. Changes include the oxidation of metals and ions, oxidation and reduction of carbonyls to and from hydroxy derivatives, and elimination of unsaturation in double bonds. Irradiation also causes decreases in aromatic and heterocyclic compounds, oxidation of free radicals, and the formation of hydrogen peroxide, peroxides, and hydroperoxides when oxygen is present. None of these reactions is due to the radiation process. In addition, irradiation produces no chemical compounds that are not already present in human diets.

Other agencies have reinforced the FDA position on the safety of irradiation. WHO reviewed the safety and nutritional adequacy of irradiated foods and concluded that food irradiation does not lead to toxicological changes in the composition of food that adversely effect human health. It said irradiation does not increase microbiological risk, defined as producing a mutant pathogenic microorganism of greater virulence than currently is observed or reducing the number of spoilage microorganisms, thereby allowing pathogens to grow without competition. WHO also said irradiation does not lead to nutrient losses that affect the nutritional importance of the food.

Medical devices and disposables have long been irradiated, but irradiated foods were not approved in the U.S. until 1992. Irradiation is now considered an acceptable food process in at least 35 countries. Irradiated products include spices, various fruits, rice, potatoes, onions, sausage, and in Bangladesh only, dried fish. At least one irradiated muscle food (meat, poultry, or seafood) is approved in 18 countries, including Chile, France and the Netherlands.

Radiation rates, temperature and atmosphere during irradiation, and storage conditions can all affect the end quality of specific foods. The macronutrients – carbohydrates, lipids, proteins, and amino acids – undergo minimal changes from irradiation.

This has been demonstrated at low- to medium-dose levels in teleost fish. The water-soluble vitamins thiamin and pyridoxine seem to be more susceptible to change than others, but fish irradiated at 1-2.3 kGy had only minimal losses of the vitamins. No effects were observed in concentrations of riboflavin, niacin, or vitaminB12.

A rat growth bioassay was conducted on the pyridoxine activity of frozen, gamma-irradiated (at 27.9 and 55.8 kGy), and thermally processed beef liver, boned chicken, cabbage, lima beans, and sweet potatoes before and after storage. Losses were approximately 40 to 60 percent of the corresponding frozen product regardless of processing treatment.

Most reported losses of vitamin C in vegetables and fruit are in the relatively low range of 0 to 20 percent. Only limited information is available on the fat-soluble vitamins. However, vitamin K, vitamin E and carotene do not appear to be significantly affected by low-dose irradiation of less than 2 kGy.

Generally, gamma irradiation does not affect the amounts of fatty acids in foods. However, many new products are formed after irradiation. Most of the changes result from the random cleavage of C-C bonds.

The irradiation of carbohydrates, for example, has been well studied. The major products produced from such irradiation are sugars, depending on the presence of oxygen and other food constituents such as proteins. However, none of the decomposition products from either lipids or carbohydrates has been found toxic in the concentrations produced.

To maximize the benefits of irradiation to reduce levels of spoilage and pathogenic microorganisms, and prevent recontamination, fish and shellfish products must be packaged prior to irradiation. Irradiation of packaging materials, however, can result in the production of various chemical compounds. The compatibility of adhesives and printed materials with the irradiation process also needs to be considered.

The materials used to package irradiated foods must be approved by FDA. Acceptable materials are listed in Code of Federal Regulations 21CFR179.45. Polyvinyl chloride packaging is not accepted by FDA due to the transfer of flavor from the material to food products.

Provisions of FDA’s 1997 reform legislation directed the agency to review its irradiation labeling regulations and, as deemed appropriate, revise them so disclosure statements are not more prominent than ingredients lists. The radura symbol was not excluded as a means of making an irradiation disclosure.

Consumers appear willing to accept irradiated food. Results of a survey reported in 1995 showed that 72 percent of the individuals contacted were aware of irradiation, but 88 percent were unaware of the details. Individuals expressed less concern about food irradiation than food additives, pesticide residues, animal drug residues, growth hormones, and bacteria. The highest concerns expressed were for the safety of processing plant employees and the environment. 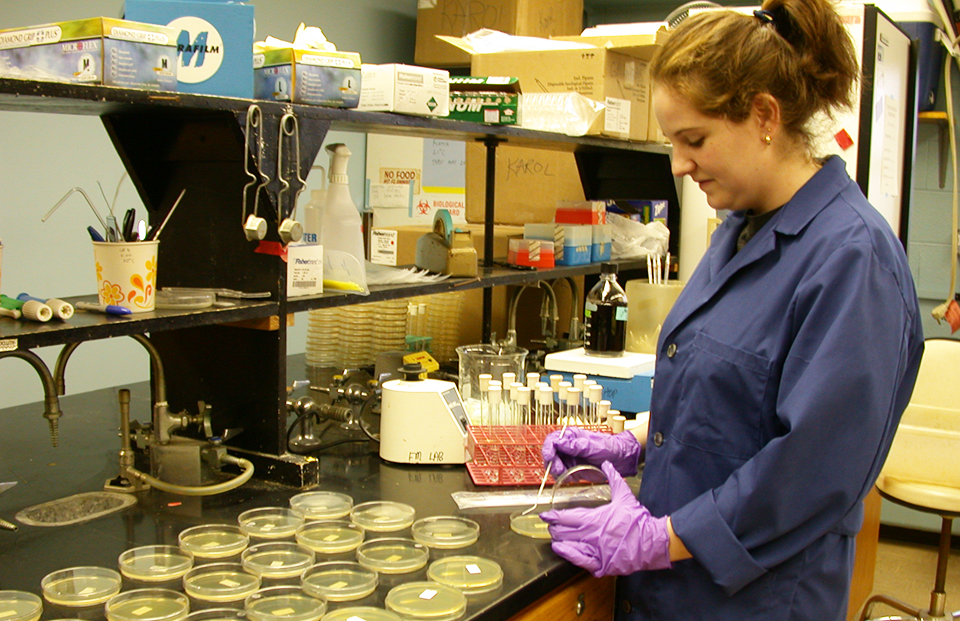 Irradiation, or ionizing radiation treatments, can extend the shelf life of seafood products by reducing pathogenic microorganisms and spoilage. 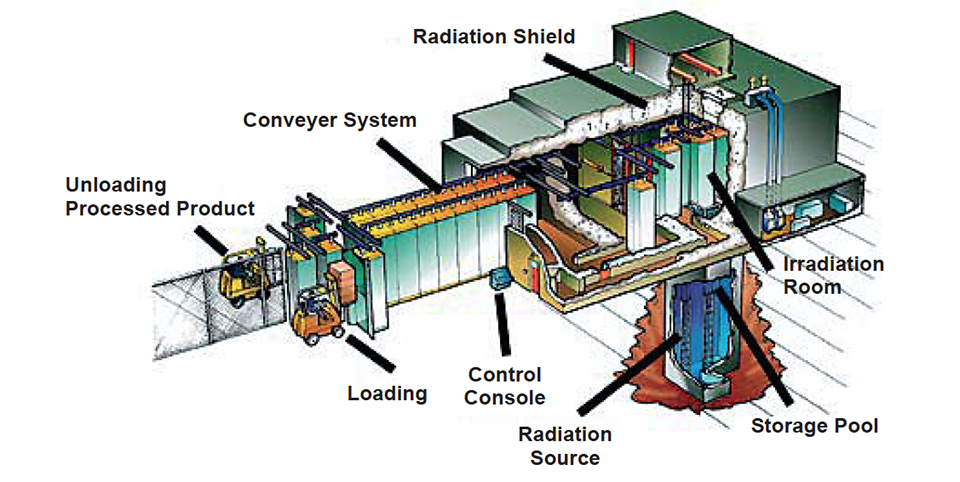 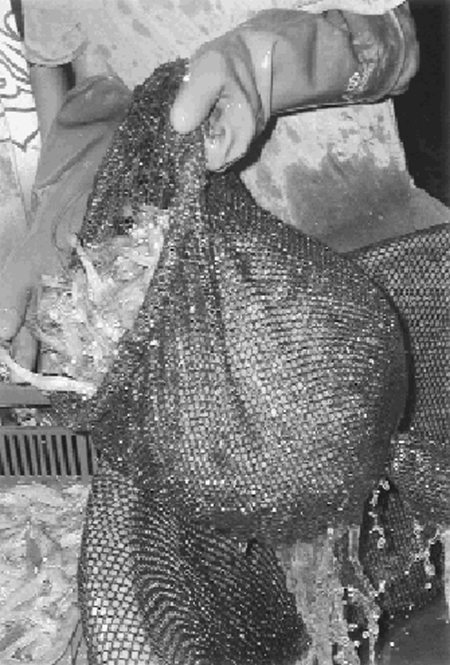