For years, fishmeal has been considered an essential ingredient in fish and crustaceans feeds. Due to rising prices and the ever-growing gap between fishmeal supply and demand, however, intensive research is being conducted to identify suitable substitutes for fishmeal that support production levels equivalent to those achieved with feeds containing fishmeal.

Fishmeal’s contributions to growth performance in cultured fish are its high protein level, an amino acids profile similar to that of fish carcasses, high digestibility, high palatability and ability to attract fish to feed. Fishmeal lacks anti-nutritional elements, but contains essential omega-3 fatty acids and high levels of minerals such as salt, calcium and available phosphate.

All these features can be obtained from substitute ingredients, but the challenge is to find an optimal combination that results in feeds that are cheaper than those based on fishmeal.

Tilapia are ideal candidates for the development of fishmeal-free feeds because they are omnivores with relatively low nutritional demands. Most studies reported so far suffered two main drawbacks: They were conducted with small fish, single ingredient replacements were evaluated, and in most, palatability and its effects on feed consumption were ignored.

Furthermore, earlier studies lost relevance due to the major change in feed production method from pelleting to extrusion and subsequent changes in nutritional values of some of the ingredients. Current research on fishmeal substitutes is based on composite feed content that is formulated from many protein sources with minerals and palatability-enhancing additives.

Work by the authors focused on evaluating the applicative aspects of tilapia feeds, including testing feeds during grow-out to market size and comparing extruded composite formulations to a fishmeal-based control feed. All experiments were carried out at the Ginosar Experimental Station of Israel’s Department of Fisheries and Aquaculture using all-male Oreochromis niloticus x O. aurea hybrids.

In the three-year study, a first phase evaluated the growth performance of hybrid tilapia fed diets with varying levels of fishmeal and fishmeal-free diets containing protein from various plant sources. In subsequent phases, the growth performance of tilapia fed fishmeal-free diets containing various combinations of animal and plant proteins were evaluated. Calculations of yield took into account the differences in size-dependent prices the farmer received for fish obtained under the treatments tested.

All diets were prepared as floating pellets with 30 percent protein content and 3,000 Kcal/kg digestible energy. The experiment was conducted for 110 days in 5-cubic-meter tanks, with 4 replicate tanks/treatment. Fish with an average weight of 92.3 g were stocked at 80/tank. The results are presented in Table 1.

The diets with fishmeal supported higher growth and feed efficiency. However, the soy-based diet resulted in fish performance not significantly different from that obtained with the fishmeal diets. With the prices for feed ingredients and marketed fish at the time the experiment was conducted, the diets containing 5 and 10 percent fishmeal were most economical.

In a second experiment, the growth of tilapia fed diets containing soy or sunflower oil cakes supplemented with poultry slaughter house offal containing poultry meal, feather meal and blood meal was compared to fish given a control diet based on soy oil cake plus 10 percent fishmeal.

All diets were prepared as floating pellets with 30 percent protein content and 2,900 Kcal/kg digestible energy. Conducted in 5-m3 tanks with 4 replicates/treatment, the experiment lasted 84 days. Fish of 126.5-gram average weight were stocked at 80/tank.

The results are presented in Table 2. No significant difference was found among the fishmeal control and the animal protein substitute treatments in growth parameters and feed efficiency, as well as survival and condition. Overall, the soy-based diet including all three substitutes was most efficient and economical, whereas the feather meal-based diet was inferior.

All diets were prepared as floating pellets with 30 percent protein content and 3,150 MJ/kg digestible energy. During the 60-day experiment, fish of 157.8-gram average weight were stocked at 60 tilapia/5-cubic-meter tank, with four replicate tanks/treatment.

The results are presented in Table 3. Fishmeal-free diets based on plant protein ingredients supported growth performance as well as the diets containing 10 percent fishmeal. This was made possible by increasing the level of digestible energy and supplementation with the essential amino acids lysine and methionine at the same total protein content.

Although no significant difference (P < 0.05) was detected among treatments, the soy composite diet containing poultry wastes was most economical. Among the all-vegetable diets, the feed with soy and dried distillers grains was slightly more economical than the others. 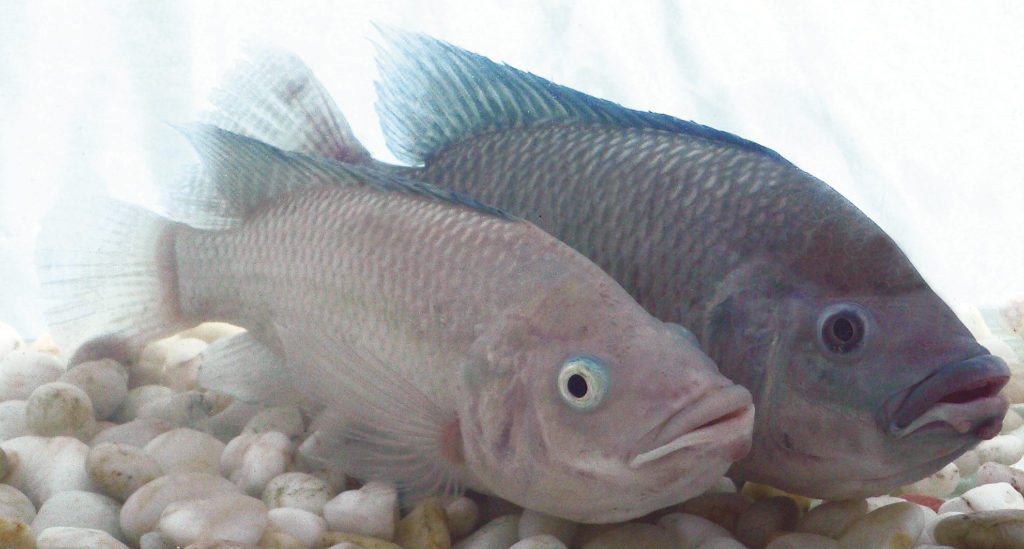 With interest in culturing tilapia in marine habitats increasing, producers must obtain tilapia capable of growing well in seawater. A study found that both pure-bred and hybrid tilapia performed better in freshwater than in water with high salinity.