El Guajaro Aquaculture, a commercial tilapia farm near Cartagena, Colombia, has been facing a challenging situation regarding its water supply. It can no longer pump water from El Guajaro Lake because its water is highly eutrophic. However, the water quality from the lake is suitable for aquaculture, with alkalinity averaging 401 meq/L (milliequivalents per liter; range 380 to 420), hardness averaging 161.5 mg/L, (145 to 185); pH averaging 8.12 (7.9 to 8.4) and salinity values between 0.6 to 1.0 ppt. Therefore, the farm recently set up a water recirculating system that does not use water from the lake. The original farm water has a heavy organic load, which affects dissolved oxygen on the farm.

We recently carried out a study to assess the performance of vaccinated Nile tilapia in an in-pond raceway system (IPRS). We acknowledge the support of Acuacultivos El Guajaro in Cartagena Colombia for their support and use of their tilapia farm facilities; and also the U.S. Soybean Export Council (USSEC) for their financial support for this trial.

Each raceway was stocked with 25,044 tilapia fingerlings (average weight 41.3 grams) vaccinated against the bacterium Streptococcus agalactiae type B. Fish were stocked at 163 fish per cubic meter and an initial biomass of 6.72 kg per cubic meter. Fish growth was assessed biweekly, and various water quality parameters were monitored twice a week, including dissolved oxygen, temperature (twice daily, morning and late afternoon) ammonia, nitrite, pH, hardness and alkalinity. Fish were fed six times a day the first month and then fed no less than four times a day (based on body weight) rest of the trial. Mortalities were collected from the raceways and counted.

When the fish reached 100 to 125 grams, the small screens of the IPRS were removed and replaced with larger screen mesh. Use of larger screens and screen maintenance improved water flow through the raceways as the fish grew and required better water quality.

The vaccinated tilapia used in this trial yielded a total of 25,327 kg per ha, with a survival of 83 percent, an FCR averaging 1.29 and an average weight gain of 4.34 grams per day. El Guajaro Aquaculture typically has survival rates of 60 percent using non-vaccinated tilapia. Although non-vaccinated raceways were not included in this study, the Streptococcus agalactiae type B, vaccination appeared to have increased survival rates of 83 to 85 percent. Endemic low dissolved oxygen across the farm contributes to fish stress and traditional pond production as low as 15,000 kg per ha per harvest.

Under low oxygen concentration conditions, fish were fed up to approx. 456 kg per ha per day by day 77, but increasing biomass and stressful conditions forced management to increase aeration and to lower feed amounts fed to 388 kg per ha per day during the last weeks of the trial. Increasing aeration and decreasing feed intake were reflected on the weight gain (grams per day), which averaged 4.34, slightly lower than the IPRS standard of 4.4 to 4.5 grams per day reported by the corresponding author at a recent aquaculture congress in 2019 for red tilapia. Higher weight gains (grams per day) have been observed with tilapia by other researchers.

Fish were stocked to target 500 grams at harvest. Stocked at 41.3 grams average, our vaccinated tilapia reached market size in 106 days. Long episodes of low dissolved oxygen lead to early partial harvest as indicated in Table 1. Average weight at partial harvest is not included on the calculation of overall average weight per raceways. Overall average weight was calculated by divided total weight harvested by number of total fish harvested. This average reflects a better way how fish was marketed.

Table 1. Biomass production and average fish weights from the three raceways in the IPRS system tested.

Aeration was increased from 11.5 Hp to 19 Hp during the last 1.5 months of the trial before harvest. The surge in electric power usage was a concern, but the resulting final production was adequate, as shown in the financial statement. Traditional ponds typically use 12 Hp per cycle only at night aeration.

Table 2. Production data from the three raceways in the IPRS system tested.

One of the biggest issues at the El Guajaro is water with high organic matter content, which increases the dissolved oxygen consumption that is vital for adequate growth and well-being of the cultured fish. As shown in Fig. 2, at 6 a.m. the dissolved oxygen (DO) readings collected were as high as 2.8 ppm and as low as 1.0 ppm. However, as mentioned earlier, feed intake was decreased and aeration increased to support maintaining DO above 1.5 ppm, at limits that would still support adequate tilapia growth. The DO levels in the afternoon (2 p.m.) were not an issue, with readings as high as 13.0 ppm and low as 4.5.

A combination of increased mechanical aeration, decreased feeding intake and increased water exchange helped maintain DO above 1.5 ppm in the morning, and to lower ammonia and nitrite concentration to safe levels.

Observed surface water velocity averaged 10.0 cm per second. Water flow appeared to reduce the abdominal fat content of the tilapia. In traditional ponds the fat dress out of the fish is 11.8 percent; in our IPRS tilapia it lower at 11.2 percent. It is worth mentioning that Cartagena customers mentioned that tilapia from our trial had firmer flesh and more noticeable silver coloration, and were very well accepted.

Table 3. Financial data for the IPRS trial vs. traditional ponds.

The water quality at the tilapia farm where this IPRS trial was carried out has good alkalinity, hardness and salinity levels, but also a high content of organic matter which results in permanent low dissolved oxygen concentrations in the morning in its traditional ponds. During the IPRS trial, mechanical aeration had to be increased and feed applications decreased to maintain adequate oxygen levels for tilapia growth.

The high temperature and low DO in the morning provided favorable conditions for pathogenic Streptococcus agalactiae type B to develop. However, the use of vaccinated fish in the IPRS trial produced increased survival rates vs. traditional pond results, 83 and 60 percent, respectively.

Use of the IPRS technology increased production vs. traditional pond results, from 15 tons per ha to 25 tons per ha per harvest. One important aspect of the IPRS is that frequent removal of fish waste in the system likely had a significant positive impact in increasing tilapia production. The farm’s 16 percent return on investment (ROI) for traditional ponds was increased to 30 percent in the IPRS system, an increase of 53 percent.

These encouraging results, together with the very positive reactions to fish form the IPRS trial by customers in Cartagena, indicate the significant potential for the IPRS technology for the production of tilapia and other fish species in Colombia and other countries in the region. 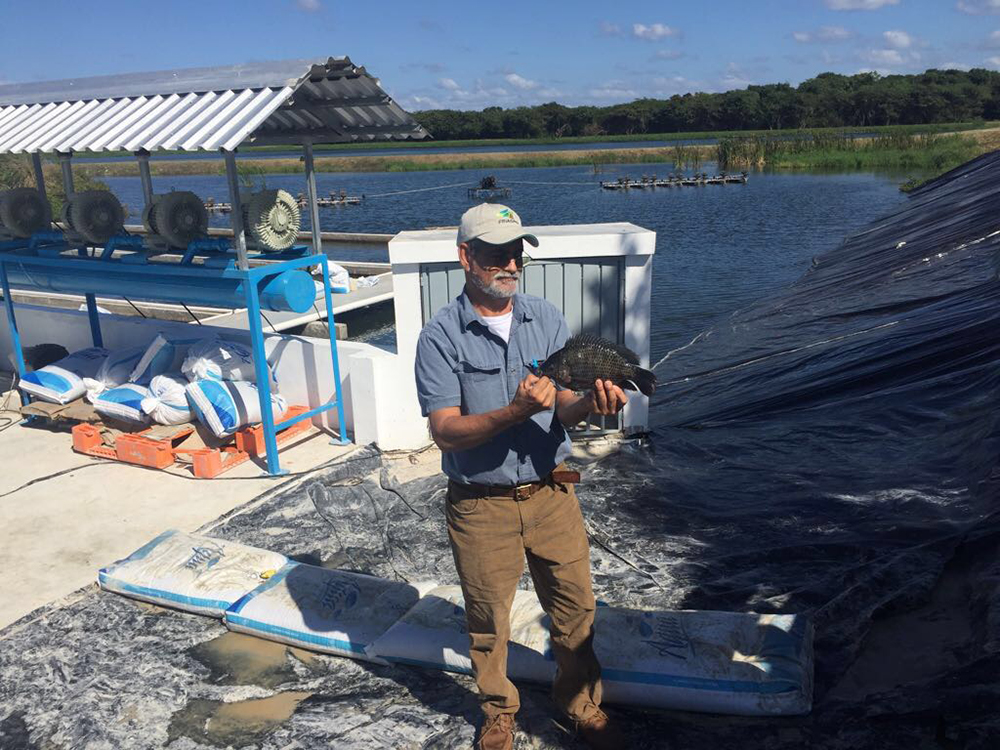 Results of a demonstration project of the In-Pond Raceway System (IPRS) technology in seven tilapia raceways at a commercial farm in Mexico showed the potential for increasing fish production with this environmentally sustainable culture system. 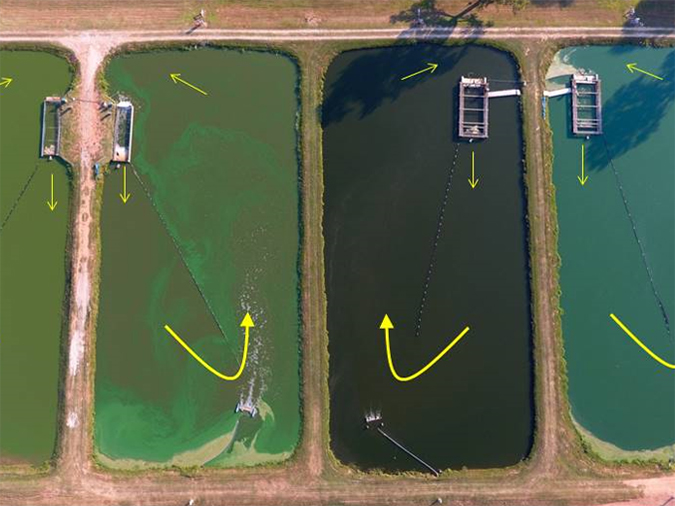 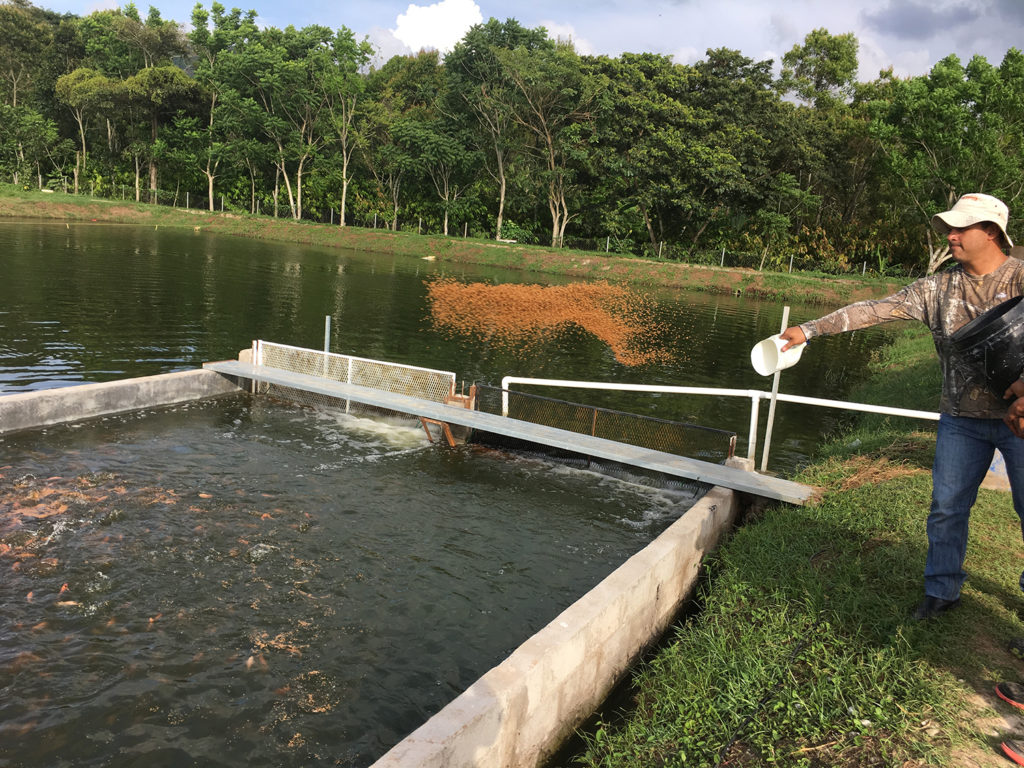 This demonstration project featuring in-pond raceway system technology in one raceway at a commercial red tilapia farm in Honduras showed the potential for increasing production with no water exchange.