Pathogenic Vibrio bacteria are a major economic concern in the shrimp industry, causing global losses of approximately $3 billion annually. Vibrio vulnificus and V. parahaemolyticus cause serious foodborne illness in humans, and other species are responsible for outbreaks of vibriosis in fish and shellfish.

Penaeid shrimp are particularly affected by luminous vibriosis caused by V. harveyi and V. campbellii. These Vibrio species, which are responsible for widespread outbreaks of disease with mortality of up to 100 percent, are the most important pathogens for penaeid shrimp production.

As the United States represents less than 1 percent of overall aquaculture production, a global study of virulent Vibrio by U.S. researchers requires shipment of overseas samples. The ability to gain this big-picture view of the Vibrio community within shrimp production systems is often impeded by sample degradation or alteration during transport.

The authors sought to directly study Vibrio from producer hatchery and pond samples to determine Vibrio’s relationship to management practices, stressors and eventually viruses, and thus a solution for this shipment dilemma was required. Further, the authors wanted to differentiate between the pathogenic Vibrios and the non-pathogenic species commonly found in shrimp waters.

A common but inaccurate method used in Vibrio field diagnostics is to differentiate virulent from avirulent strains by plating on thiosulfate citrate bile salts sucrose (TCBS) agar, a widely used differential medium. There is often a misconception that TCBS colony color results of green or yellow are sufficient to determine the level of pathogenic Vibrio in the water samples. However, TCBS agar is not a differential medium for certain Vibrio species, including V. harveyi and others, which can be variable in their utilization of sucrose and can not be reliably distinguished from other sucrose-positive or sucrose-negative species.

Seeking solutions to overcome Vibrio field diagnostics obstacles, Whatman fast technology for analysis of nucleic acids (FTA) cards were evaluated as a simplified, shelf-stable collection method for the preservation of genetic material from water samples without storage concerns such as ultralow freezing or expedited transport.

With the FTA card process, cells are broken open on contact with the chemicals in the FTA card matrix, and nucleic acids bind to the fibers of the FTA matrix. When stored dry, this genetic material is safe from enzymatic degradation or hydrolysis.

DNA has successfully been amplified with polymerase chain reaction (PCR) up to 17 years after sample collection using the FTA card method. When used over shorter time frames of weeks or months, it could become a valuable tool for PCR analysis of field samples from remote locations.

In the authors’ study of the FTA card-sampling method, an existing PCR assay developed by Dr. S. Haldar at Osaka Prefecture University was applied to distinguish Vibrio campbellii and Vibrio harveyi species by targeting variable regions in the hemolysin gene (hly), a highly conserved virulence factor among the Vibrionaceae that encodes for a hemolytic toxin that attacks cell membranes, causing anion leakage, cellular lysis and cell death.

In the study, PCR targeting the hly gene was performed using several sources of Vibrio genetic material: DNA isolated from pure cultures of V. campbellii and V. harveyi, DNA bound to FTA cards spiked with Vibrio cells diluted in pond water, biofloc liquid or clean phosphate-buffered saline, amplified by including a punch of the FTA card in each reaction tube, or DNA eluted from the same FTA cards and repurified using nucleic acid extraction columns.

These PCR tests consistently allowed for the detection of virulence genes from as few as 100 Vibrio cells per PCR reaction and in all but the most heavily contaminated biofloc samples. The sensitivity of the species-specific PCR assay used remained about 100 cells/PCR reaction, no matter whether high-quality template DNA from pure liquid cultures from nucleic acid purification or FTA-bound DNA from pure culture, shrimp pond water or buffer-diluted samples was used.

However, the presence of PCR inhibitors in shrimp biofloc liquid samples reduced detection 100-fold compared to detection in pure cultures. The effect of the PCR inhibitors was removed by repurification of Vibrio DNA from FTA cards with the nucleic acid extraction method, allowing virulence gene detection consistently comparable to pure culture after processing.

Initially working only with DNA from the microbial community, the authors then sought to question if the presence of a toxin gene from Vibrio necessarily indicates pathogenic potential. What if the gene is never expressed? Additionally, with many genes having multiple copy numbers in the genome, how quantitative is the approach to determine pathogenic potential?

Current work involves studying the RNA from these same cards, and preliminary results suggest this is very useful. In fact, early work studying the stressors that upregulate the expression of these Vibrio toxins is proving quite interesting, but needs to be studied more thoroughly. The authors are also developing quantitative PCR testing to make this approach more robust, more sensitive and less labor intensive. Additionally, their work is seeking to expand the number of virulent species and virulence genes of study.

With RNA and quantitative PCR work under way, the next step for this group is to start studying Vibrio samples from abroad, the original intent for the method development. The Microbial Discovery Group will now seek willing shrimp producers to ship nucleic acids on these FTA cards from their low- and high-producing ponds, combined with completed questionnaires relating to management practices and water chemistry data. Collection of this data will help the scientific and shrimp producer communities understand Vibrios in relation to management practices, stressors and resulting effects on shrimp economics.

By using FTA cards as a sampling method for remote, overseas or otherwise inaccessible water samples, one can preserve a genetic snapshot of the biological community present at the time of collection. FTA card-based sampling techniques and DNA- or RNA-based virulence gene detection and quantification can be valuable tools in the monitoring of Vibrio virulence potential.

The ability to detect and understand differences in the Vibrio community composition of shrimp production system water samples will enable researchers to understand the relationships among these organisms, pond performance, management practices and environmental stressors. 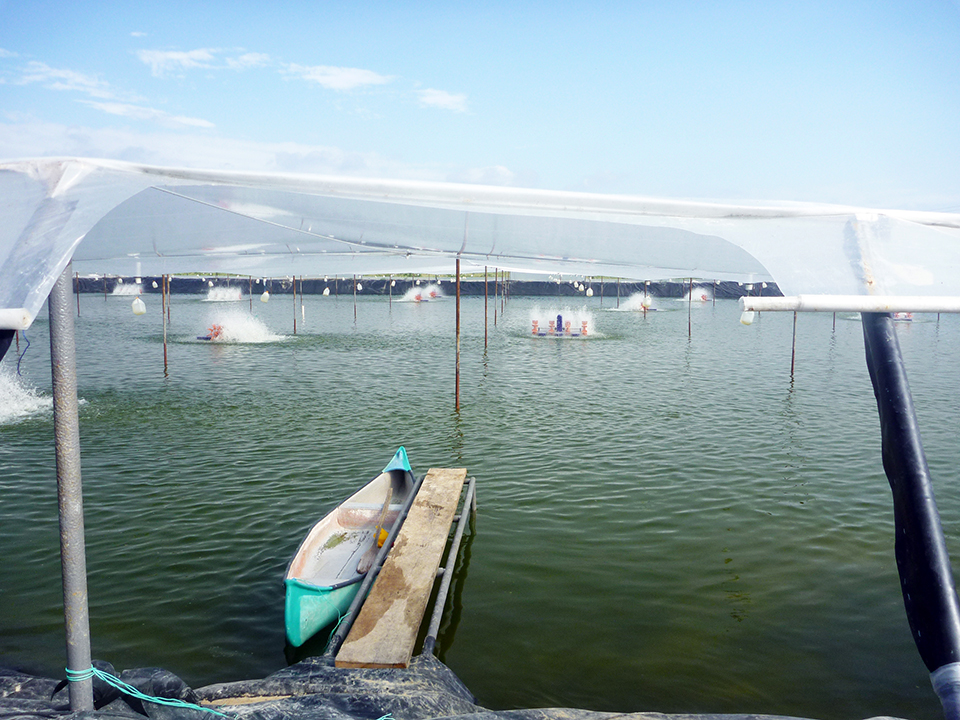 In a survey of Vibrio concentrations in white shrimp postlarvae at two inland farms, hatchery postlarvae were acclimated in water with salinity reduced from 30 and 5 ppt to 2 ppt at the farms. One farm stocked postlarvae in nursery ponds, and the other stocked directly into grow-out ponds.