Its combination of natural conditions and technology leads to more sustainable shrimp farming practices by mimicking the natural aquatic environment. Use of chemicals is avoided by using a symbiotic system created through prebiotics (compounds in feed that induce the growth or activity of beneficial microorganisms) and probiotics (living microorganisms that have a positive effect on the host). And the production of natural food for the shrimp results in a decrease in feed usage, optimal water and sediment quality and the elimination of diseases.

Implementation of an Aquamimicry system involves the study of the microbial communities of the shrimp intestine and the surrounding environment. Identification of the microbial community present in the shrimp and its surrounding environment at different culture stages could help understand the main important microbial groups, which would help prevent disease outbreaks and maintain good water quality condition during the culture period.

This article – adapted and summarized from the original publication (Zeng, S. et al. 2020. Dissimilarity of microbial diversity of pond water, shrimp intestine and sediment in Aquamimicry system. AMB Expr 10, 180 (2020)) – evaluated the diversity of the microbial communities in shrimp intestines, pond sediment and culture water in a Pacific white shrimp (Litopenaeus vannamei) farm in the Province of Nakhon Nayok, Thailand.

The Aquamimicry shrimp farm where the study was conducted is located in the Province of Nakhon Nayok, central Thailand. Various samples were collected every 15 days from four shrimp ponds – each with an area of 4,000 square meters and 1.5 meters deep, and designated as A, B, C and D – between August and October 2018. L. vannamei shrimp were cultured at an initial stocking density ranging from 160,000 to 200,000 shrimps per pond (40 to 50 shrimp per square meter). Probiotics were applied during the culture period, including Bacillus subtilis, Bacillus amyloliquefaciens, Bacillus valismortis, Bacillus megaterium and Bacillus licheniformis.

Samples collected included the digestive tracts of 20 shrimp per pond; water samples were also obtained from three different locations in each pond; and three replicates of sediment samples were collected. All samples were properly preserved for laboratory processing and analyses.

For detailed information on the experimental design and collection of samples; water and sediment quality determination; DNA extraction and sequencing; and bioinformatics and statistical analysis, refer to the original publication.

A previous study on shrimp earthen ponds reported that similar bacterial community compositions were observed in shrimp intestines, the surrounding water and sediment. However, results of our study revealed that the microbial communities of the three habitats were markedly separate (Fig. 1), and that the microbial community in shrimp intestines was not the same as those in the surrounding water and sediment in the Aquamimicry system.

Microbial diversity, particularly intestinal diversity, may be related to host health. In a previous study, shrimp intestinal microbial diversity was significantly different at different culture stages. Similar results have been observed in the intestinal microbiota of aquacultured fishes, where diversity decreases over the culture period. Other researchers have reported that larval shrimp can obtain sufficient and diverse bacterial species rapidly from the environment, although only a small number of the microorganisms can successfully colonize the shrimp digestive tract.

Previous studies have shown that the development of an animal’s digestive and immune systems may significantly affect the intestinal microbiota. Shrimp larval stages may derive more species of microorganisms from their environment than adult shrimp. This would be consistent with the processes reported in other aquatic animals, where their microbial diversity decreases with host development. This information could be important for further microbial management for a more beneficial intestinal microbiota in shrimp culture and reduced incidences of disease caused by opportunistic pathogens.

Various researchers have demonstrated the important roles of intestinal microbial composition in aquatic animal health. In addition, the intestine may host opportunistic pathogens and lead to disease outbreaks. Our results showed that the abundance of some opportunistic pathogens was relatively low, including for Aeromonas (10.7 percent), Phascolarctobacterium (< 0.01 percent) and Photobacterium (0.4 percent), while Vibrio (10.9 percent) was the dominant genus in shrimp intestines. These results suggest that these genera may act not only as opportunistic pathogens, but also as essential players with other unknown functions in the intestine environment.

During the study, we added some probiotics but the relative abundance of Bacillus was low in the three habitats (< 0.001 percent), indicating that the use of probiotics did not effectively establish a large population in the shrimp intestines and the environment, as was expected. We found that another probiotic, Lactococcus, was present at higher than 0.1 percent in shrimp intestines. This information should be of value to help the rational use of probiotics in shrimp culture.

We evaluated the composition and diversity of shrimp intestine microbiota and surrounding microbial community in an Aquamimicry system and investigated the relationship between intestinal microbiota and the surrounding water and sediment.

Our results showed that the microbial communities in shrimp intestines and the surrounding environment – culture pond water and sediment – were significantly distinct from each other in the Aquamimicry system. Also, 23 separate taxa [singular taxon, a group of one or more populations of an organism or organisms that taxonomists consider a unit] for each habitat were further characterized, and the microbial communities differed significantly at different shrimp culture stages. The dissimilarity between the three habitats could be a potential indicator of the health conditions of the shrimp. 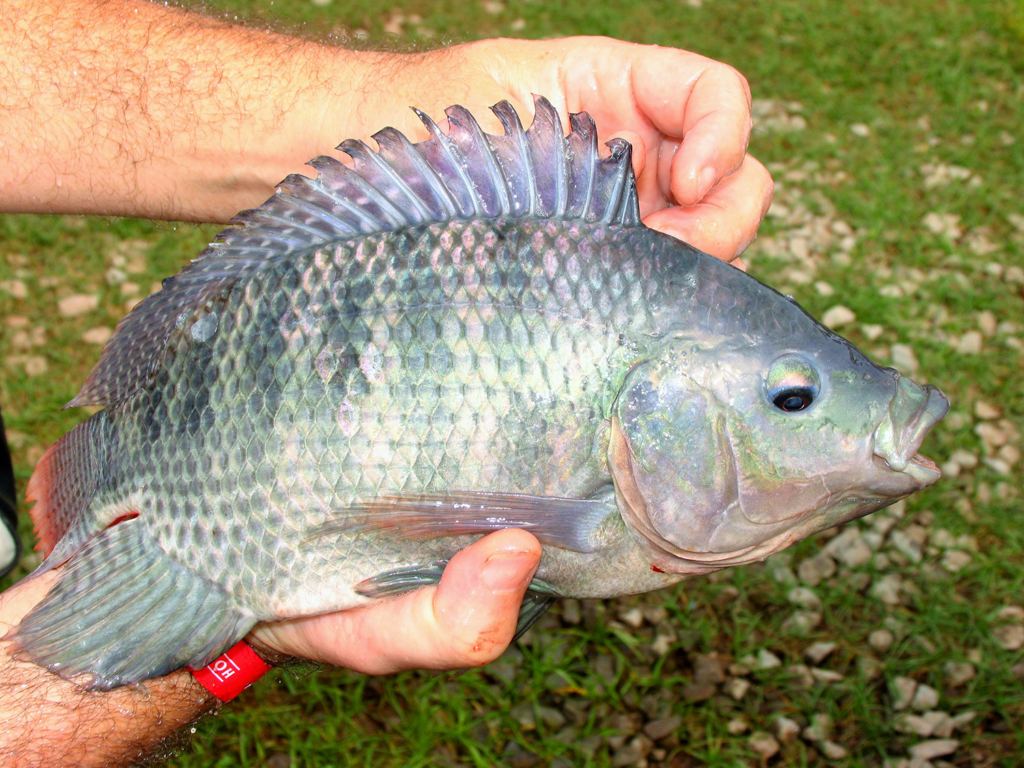 Study compares effects of vegetable-based and commercial pellet-based diets on the nutrient assimilation and gastrointestinal microbiota of GIFT tilapia.