In fishes, the circadian clock – internal, natural process regulating biological cycles that repeat approximately every 24 hours – plays a key role in the temporal organization of a broad range of biological processes, and thereby plays a central role in optimizing survival.

Light, temperature and food availability represent major environmental factors, indicative of the time of day (so-called zeitgebers), that serve to reset the circadian clock on a daily basis so that it remains synchronized with the 24 hours, day-night cycle. A key issue is how combinations of these environmental factors are integrated to regulate the circadian timing system.

This integration step in large part appears to be species dependent and indeed represents one facet of adaptation to life in a particular ecological niche, e.g. catfish prefers eating during the dark phase, while in trout, feeding occurs during the light phase. Desynchronization of the circadian system caused by artificially induced changes in the relative timing of cycling environmental conditions may contribute to stress in animals, and lead for example to increased susceptibility to diseases. At the molecular level, the circadian timing system is based on a set of clock genes and proteins which are expressed in most cell types and are organized in translational-transcriptional feedback loops.

This article – adapted and summarized from the original publication – presents the results of a study to explore the function and regulation of the turbot’s circadian timing system at the molecular and behavioral levels, with the long term goal of contributing to the optimization of aquaculture of this species.

The turbot and the facilities used in this study were provided by the Marine Research Centre (ECIMAT) of the University of Vigo (Spain). The fish were raised in 500-liter tanks in an open seawater system, with water kept at 18 degrees-C, under natural photoperiod, and fed four times per day with a commercial pellet diet (56 percent protein, 38 percent lipids and 6 percent carbohydrates). Two types of experiments were carried out with the following design.

Six-month old fish (average body weight 95 ± 25 grams) were acclimated for nine days in grey, 100-liter tanks at 10 fish per tank, and a daily light cycle of 12 hours of light and 12 hours of darkness, with lights on at 7 a.m. Three groups of fish were used in this study. The LD group was fed once per day at zeitgeber [any external or environmental cue that entrains or synchronizes an organism’s biological rhythms to the Earth’s 24-hour light/dark cycle and 12-month cycle] time (ZT) 2 (where ZT = 0 is defined as lights on), and sampled at ZT 3, 6, 9, 15, 18, 21 and 27 on the ninth day of acclimatization.

The fish in the DD group were initially maintained in LD conditions with regular feeding but were then transferred to constant darkness on the ninth day with the same feeding schedule (feeding at Circadian Time, CT, 2) as the first group and sampled at CT 3, 6, 9, 15, 18, 21 and 27. The fish in the R DD group were fed randomly during the light phase of an LD cycle, and then transferred to DD conditions with random feeding time before sampling under constant darkness at CT 3, 6, 9, 15, 18, 21 and 27.

To evaluate turbot circadian behavior, animals were relocated to opaque, grey, 30-L aquarium tanks with a 14cm column of sea water at 18 degrees-C and constant air flow. Eighteen fish were divided into two groups: one was fed regularly at ZT2 or CT2 and the second was fed at random times during the light phase or subjective light phase. Both groups were subjected to different lighting regimes in three independent experiments.

Fish tissue and organ samples were collected from nine fish of each group and time point. Sampling in darkness was performed using a very weak dim red light directed away from the working area. The fish were anesthetized and sacrificed, and tissues samples stored at minus-80 degrees-C until used in various analyses.

For detailed information on the experimental design and the animals use; daily variation of gene expression; daily locomotor activity and other parameters; and activity data and statistical analyses, please refer to the original publication.

Results of our study provide a first indication of the organization of the circadian timing system of the turbot, an important flatfish species for the aquaculture industry throughout Asia and Europe. Light cycles and feeding times produced rhythmic clock gene expression [an internal time-keeping system regulating many physiological processes through the generation of approximately 24-hour circadian rhythms in gene expression, which are translated into rhythms in metabolism and behavior], although the effects of feeding were more evident in the intestine and liver.

Under free-running conditions, the rhythms of expression of clock gene expression persist confirming the presence of a self-sustaining circadian oscillator. But circadian rhythmicity in the turbot’s locomotor activity as well as food anticipatory activity, FAA [a daily increase in locomotor activity preceding the presentation of food] depends on the continued exposure to a light/dark cycle and light, respectively, thereby implying a strong coupling of locomotor and foraging activities with the light phase.

Despite the evidence for the functionality of the turbot circadian system observed in this study, turbot locomotor activity is immediately arrhythmic upon transfer to DD. Consistent with this observation, in muscle, a tissue directly involved in locomotion, two genes that are negative effectors within the clock machinery were arrhythmic in DD regardless of feeding time. These findings point to the importance of light for shaping clock function and clock outputs such as locomotor activity. And our data potentially points to the existence of a tissue specific interplay between light and clock regulation of these two clock genes. One key issue may be differences in the intensity of light penetrating deep tissues in the turbot body.

The swimming activity of turbot was mainly restricted to the light phase, and under constant light or darkness it loses its rhythmicity. Our results are consistent with a previous study that reported a loss of rhythmicity of turbot under constant darkness. The natural environment of turbot would tend to suggest that these fish might normally experience periods of complete darkness. Specifically, this flatfish’s habitats range from shallow waters down to a depth of 1,500 meters, where very little light would penetrate through the water column.

However, the absence of circadian rhythmicity under constant darkness may also relate to our experimental protocol. For example, turbot typically bury themselves under sandy substrates so the absence of natural substrates in our experiments might contribute to the absence of rhythmicity. Furthermore, a masking effect of constant light or darkness upon endogenous activity levels cannot be ruled out. The light intensity used in our constant light experiments (380 lux) may also contribute to a masking effect. Indeed, in other species, the rhythmic locomotor activity under free running conditions can only be visualized under constant dim lighting conditions.

In fish, the activity phase can be strongly influenced by the photoperiod, but also by the food administration phase although this observation does not seem to occur in all species-specific manner. When fed regularly at the end of the night under a short photoperiod, similar to tilapia, turbot remains diurnal. Our results are consistent with the observations of other researchers, which documented diurnal behavior in juveniles under natural photoperiod and feeding during the photophase [period of light during a day-night cycle]. Furthermore, under constant light the activity increased during the subjective night.

In our study we also observed a synchronizing effect of feeding time on the daytime swimming activity of juveniles fed each morning at the same time. An increase just before eating in locomotor activity (1.87-fold) was observed 2 hours before meal time, which subsequently declined to basal levels once the food in the water had been removed. Such behavior was absent in those fish fed at random times. Under constant dark conditions, turbot failed to anticipate the arrival of food, whereas in constant light conditions, the turbot juveniles exhibited FAA with a similar amplitude to that observed in LD.

Our data indicate that turbot relies on light to establish rhythms of both locomotor activity and to enable FAA. Indeed, flatfish have been classified into three categories depending on their predatory strategy: visual feeders, predominantly visual feeders and non-visual nocturnal feeders.

Other authors have described S. maximus as an active visual predator for which moving and elongated objects incite a greater response than immobile and small objects such as artificial food pellets. This behavior also correlates with the structure of the head and sensory organs in the species; it also indicates that light is a key signal to stimulate the search for food in turbot; and that although turbot apparently cannot anticipate the arrival of food supplied regularly during darkness, it can still detect its presence in the water.

Our study assessed the function and regulation of the circadian timing system of S. maximus at the molecular and behavioral levels, and the daily expression of various circadian clock genes in various tissues under a range of lighting conditions and feeding regimes. In fish, the circadian clock represents a key regulator of many aspects of biology and is controlled by combinations of abiotic and biotic factors. These environmental factors are frequently manipulated in fish farms as part of strategies designed to maximize productivity.

Results of our research show how light, feeding and the circadian clock differentially regulate locomotor activity and other physiological processes, helping understand the circadian timing system in S. maximus and helping optimize its production procedures and well-being in aquaculture operations. This knowledge should contribute to optimizing the aquaculture conditions for turbot and other flatfish species.

The growth and survival of red tilapia fry were not significantly affected by different photoperiods in three 30-day experiments. Results suggested that it is not necessary to maintain constant lighting or a constant light/dark circadian scheme. 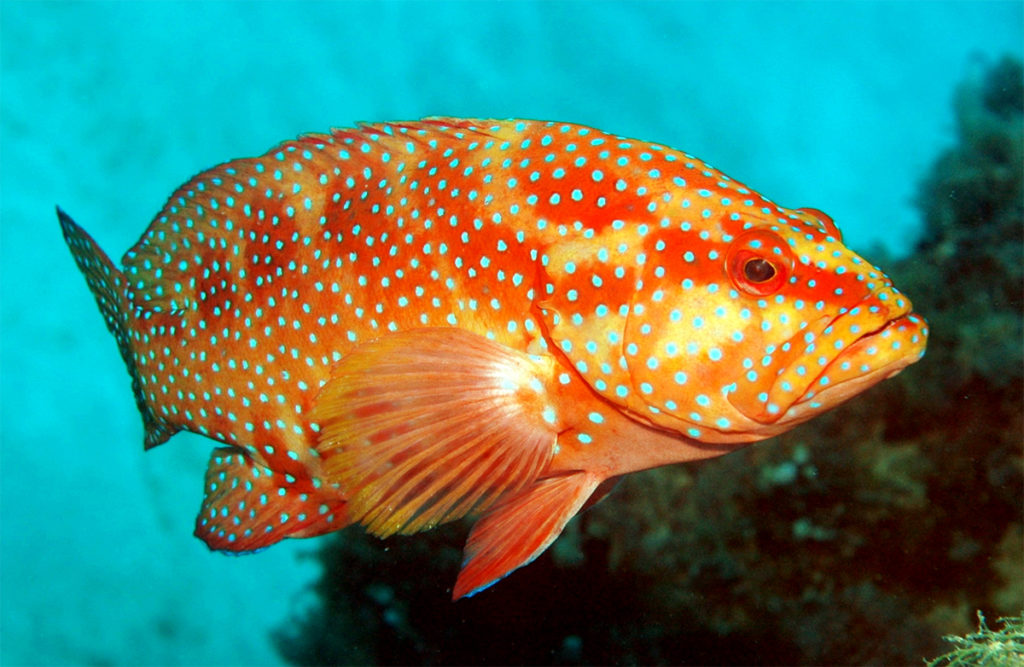 Study investigates microbiota and host metabolism in the coral leopard grouper, an important fisheries species in Asian markets and only recently cultured.