Fish meat quality is important to aquaculture producers and consumers because it is directly associated with human health and nutrition. Quality involves several characteristics, including texture and color, and is heavily influenced by external factors like feeding strategies, widely used to improve meat quality.

The use of phytogenic [natural growth promoters derived from spices, herbs or other plants] feed additives recently has gained considerable interest to improve meat quality. Soybean isoflavones (SIF) are phytogenic additives abundant in soybeans. Several beneficial effects have been reported for SIF in animals, including cardioprotective, antifungal, antioxidative and anti-inflammatory properties. However, there are only a few reports about the effect of SIF on meat quality. Some studies have reported that dietary SIF supplementation increased the water-holding capacity, WHC [ability of food to hold its own or added water during the application of force, heating, pressure or centrifugation] and improved the color of male broilers. However, research is needed on the possible influence of SIF on fish flesh quality, which has not yet been studied.

Meat quality can be evaluated by the fatty acid (FA) profile, which reflects the health benefits of fish. For example, eicosapentaenoic acid (EPA) and docosahexaenoic acid (DHA) are beneficial to humans because they possess the ability to counteract coronary heart disease, but there is no information about the effect of SIF on the FA profile of fish. Free amino acids (FAAs) are important indices of meat quality because they directly affect taste and participate indirectly in the flavor development of animal meat. Physical properties, such as the water-holding capacity (WHC) and tenderness, are also important quality indicators of fish muscle, but to date there is no evidence that SIF could affect the physical properties of fish.

This article – adapted and summarized from the original publication – reports on a study to investigate, for the first time in a fish species, the effects of dietary SIF supplementation on the health, flavor quality indicators and physical properties of grass carp (Ctenopharyngodon idella, one of the most important freshwater aquaculture species in China) muscle.

The study was carried out in a laboratory at the University of Sichuan (Sichuan, China). Grass carp were adapted to the experimental system before initiating the experiment and fed with a basal experimental diet without SIF supplementation for 4 weeks. Next, 540 fish with a mean body weight of 213.78 ± 0.51 grams were randomly selected and reared in 18 cages (1.4 × 1.4 × 1.4 meters), with each cage stocked with 30 fish.

Experimental diets were prepared using fishmeal, casein and gelatin as the dietary protein sources, and with fish oil and corn oil as the dietary lipid sources. Commercial soybean isoflavones, SIF (genistin, genistein, daidzin, daidzein, glycitin and glycitein, purity 98 percent) were added to the basic diet to provide graded levels of SIF at 0 (basal diet), 25, 50, 75, 100 and 125 mg SIF/kg feed. All of the dry ingredients in the experimental diets were finely ground and thoroughly mixed together by a mixer until they were homogenous. The mixtures were then made into pellets and air-dried at room temperature.

Each experimental diet was assigned to three cages. Grass carp were fed with a daily ration of 3 to 5 percent body weight – to apparent satiation – divided into four meals per day for 60 days. Uneaten feed was collected, dried and weighed to calculate the feed intake (FI) 30 minutes after feeding. During the 60-day feeding trial, cages were not cleaned, water temperature and pH were kept constant at 28.5 ± 2.0 degrees-C and 7.5 ± 0.3, respectively, and dissolved oxygen was above 6.0 mg/L. Nitrite concentration and ammonia concentration were 0.005 to 0.010 mg/L and 0.2 to 0.4 mg/L, respectively. The fish were maintained under a natural light and dark cycle. Fish were weighed and measured before and after the experimental period, and tissue samples were collected for various experimental tests.

For detailed information on the experimental design and the feeding trial; sample collections and various analyses; and statistical analyses, refer to the original publication.

Our data showed that dietary SIF supplementation improved the nutritive quality and health benefits of grass carp muscle. The content of protein and health-supporting polyunsaturated fatty acids (PUFAs) content can reflect the nutritive quality of fish flesh. In the grass carp muscle, compared with the non-supplemented group, both the protein content and levels of PUFAs significantly increased and reached maximum levels in the fish fed diets with 50 mg/kg SIF, increasing by 11.9 percent and 10.8 percent, respectively. The reasons for the increase in PUFAs are unclear and require further investigation.

The amount and type of fatty acids, FAs, can reflect the health benefits of fish to humans; reducing the intake of saturated fatty acids, SFAs, has been reported to decrease the risk of cardiovascular disease in people. Long chain omega-3 PUFAs, such as EPA and DHA, have health benefits for the human heart, brain and eyes. Our results showed that, compared with the non-supplemented group, the total content of SFAs was significantly decreased and reached minimum levels decreasing by 12.1 percent in the 50 mg/kg SIF group. The EPA content significantly increased in fish fed diets with 25 to 75 mg/kg SIF and reached its maximum and increased by 22.9 percent in the 50 mg/kg SIF group. We also observed that, compared with the non-supplemented group, dietary SIF supplementation had no significant impact on DHA levels.

Our data also showed that dietary SIF supplementation improved the flavor quality indicators of fish muscle. Compared with the non-supplemented group, grass carp fed diets with 25 to 50 mg/kg SIF had significantly higher FAA content, and the total FAAs reached maximum levels and increased by 7 percent in the 50 mg/kg SIF group.

Dietary SIF supplementation improved the physical properties of fish muscle. These properties, including WHC and tenderness, are important quality parameters for fish flesh. WHC can be evaluated by cooking loss, and a low cooking loss indicates high meat quality in fish. Our results showed that dietary SIF supplementation reduced the cooking loss, which was lower in the group fed the 50 mg/kg diet, indicating that SIF increased the fish muscle WHC.

Flesh tenderness can be evaluated by shear force [unaligned forces pushing one part of a body in one specific direction, and another part of the body in the opposite direction], and a low shear force indicates high tenderness. We observed that dietary SIF supplementation reduced the muscle shear force, which was lowest in the fish group fed the 50 mg/kg diet, indicating that SIF supplementation increased the sensory tenderness of fish muscle. We speculated that the increased tenderness might be partially related to WHC and antioxidant capacity.

Results of our study showed that dietary SIF supplementation at 25 or 50 mg SIF/kg of diet increased muscle protein, total PUFA, health-promoting fatty acids (including EPA and DHA), total FAA, WHC and tenderness, and meat quality of grass carps. Our data revealed evidence of the potential regulatory effect of SIF on the quality of flesh of grass carp, one of the most important freshwater aquaculture species in China. These results can be an important reference for formulating feeds for grass carps to produce improved quality fish. 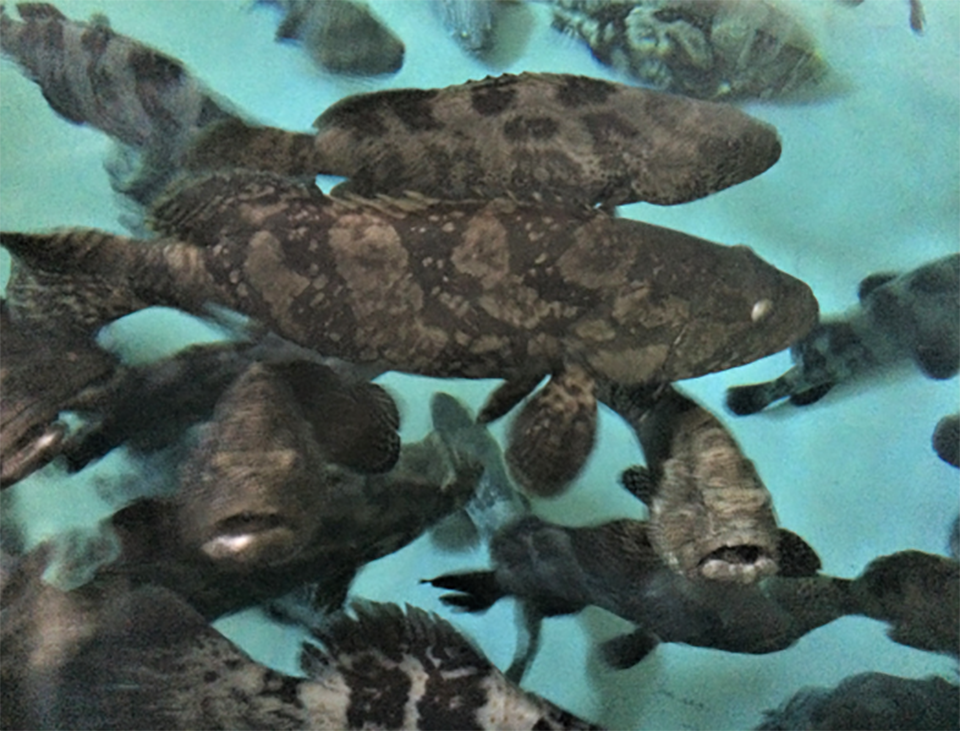 Evaluation of partial replacement of fishmeal with soy protein concentrate in diets for pearl gentian grouper, a hybrid of giant grouper and tiger grouper. 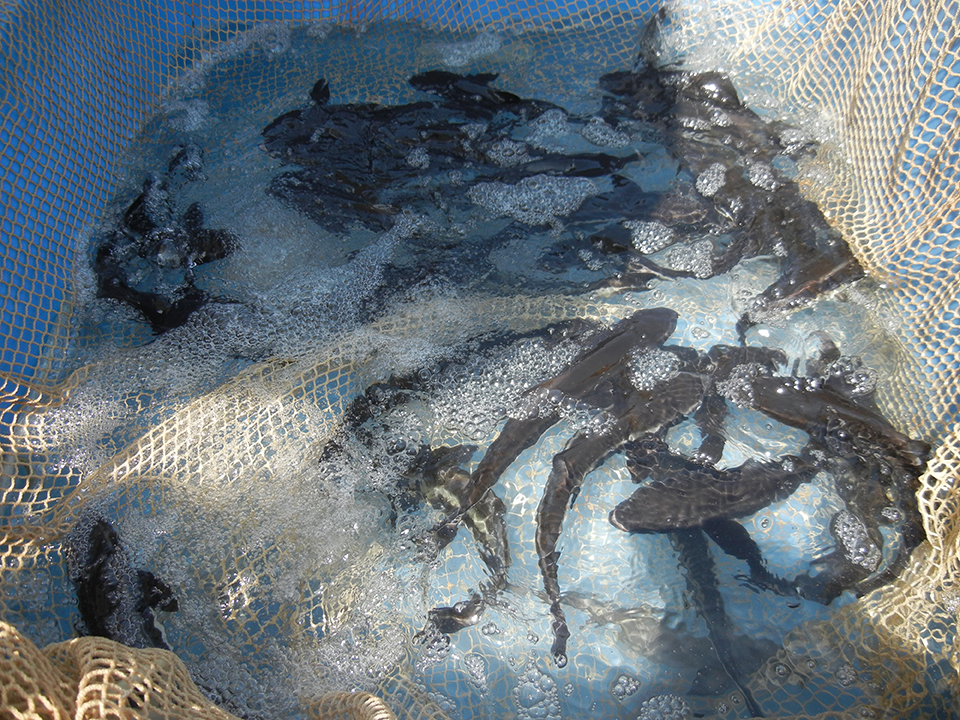 Three species of Indian major carp, indigenous to the rivers of the subcontinent, are widely cultivated in India and parts of Southeast Asia.

Current knowledge about fumonisins in aquaculture

The latest knowledge about fumonisins in aquaculture and the importance of preventing synergistic interactions between different mycotoxins.