Restricting use to periods when oxygen supplementation is needed can conserve water, lessen energy use

Pond aquaculture is becoming increasingly intensive. Resultingly, more feed is used, which results in a large oxygen demand. Water exchange can be used to avoid low dissolved oxygen concentration (DO), but it is more efficient to apply mechanical aeration.

Mechanical aeration has become a standard practice for avoiding low dissolved oxygen concentration in feed-based culture of channel catfish, tilapia, marine shrimp and several other species. There are many types of pond aeration systems, but most operate on one of two principles: They are either splashing water into the air “splasher” or releasing air bubbles into the water “bubbler.”

Paddlewheel and vertical pump (turbine) aerators are the most commonly used splashers in commercial aquaculture. The splashing action of these aerators increases the surface area of water exposed to the air and facilitates oxygen transfer rate from air to water. Of course, greater surface area of water exposed to air would be expected to increase evaporation, because the process occurs at the air-water interface. Evaporation is a cooling process; thus, mechanical aeration may also result in a lower water temperature than would occur without aeration. There is no available information on the effect of mechanical aeration with surface aerators on evaporation rate or water temperature in aquaculture ponds.

This article is adapted and summarized from the original publication (Aquaculture Research 49(6):2184–2192), which compared water temperature and water loss by evaporation in control ponds and in ponds aerated with surface aerators at four different aeration rates.

The study was conducted during the summer at the Auburn University E.W. Shell Fisheries Center, Auburn, Ala., USA. Six 0.04-hectare (0.1-acre) research earthen ponds with an average depth of 0.85 meters (2.8 ft) were selected. Study ponds (Fig. 1) were located side by side, with the same dimensions, containing water inlet and outlet control structures, and supplied by the same water.

One pond had no aeration and served as the control (C), while the other five ponds were fertilized to promote phytoplankton blooms. Aeration was not applied to one fertilized pond to provide a nutrient-enriched control (NEC). Either one, two, three, or four 0.37-kilowatt (0.5-horsepower) commercial Air-O-Lator aerators (Air-O-Lator Corp., Kansas City, Mo., USA) were installed in each of the other fertilized ponds. These vertical-pump aerators splashed water into the air. The aeration rates were equivalent to 9.2, 18.4, 27.6 and 36.9 kW/hectare (5, 10, 15 and 20 hp/acre). Aerators were alternatively operated for 24 hours (ON) and then turned off for 24 hours (OFF). In total, aerators were on for 25 days and off for 25 days.

A 10-cm diameter polyvinyl chloride pipe was installed in each pond close to the edge as a stilling well. Water levels in the stilling wells were measured with the hook gauge. A 1-cm diameter hole was drilled into the side of each pipe to maintain the same water level inside the pipe as outside in the pond. Surface water temperature, water temperature at 70-cm depth in each pond, and air temperature were monitored at 1-hour intervals using commercial, HOBO Pendant® Temperature Data Loggers (HOBOware®; Janesville, Wisc., USA). All data loggers were installed the day before starting the experiment and used until the end of the experiment. Water samples were collected for daily turbidity and weekly chlorophyll a measurements. A standard National Weather Service Class-A type evaporation pan and a standard U.S. Weather Bureau type rain gauge (Forestry Supply, Jackson, Miss., USA) were used to measure evaporation and rainfall, respectively.

Evaporation resulting from aeration for 24 hours (mm/day) as calculated based on heat loss from aerated ponds was determined with the following equation:

Two simple linear regression models were calculated (Fig. 2) to reveal the strong linear relationship between aeration rate (hp/acre) and the mean decrease in water temperature in aerated ponds related to that in the NEC. There was a clear effect of increasing the number of Air-O-Lator units on decreasing either the surface or bottom water temperature.

Aeration rates in earthen-lined aquaculture ponds range from 2 to 16 hp/acre, and even greater rates may sometimes be used in plastic-lined ponds for biofloc-technology. Some intensive tilapia systems are aerated with 40 to 60 hp/acre.

Water losses (Table 2) caused by aeration for 24 hours were 15.2 and 43.6 cubic meters per hectare for the aeration rate of 5 and 20 hp/acre, respectively. The evaporation loss increased linearly with greater amount of aeration. Evaporation rate increased 32 and 92 percent when ponds were aerated for 24 hours with one and four Air-O-Lator aerators, respectively. Increasing evaporation reduces water volume and can concentrate contaminants. It can also increase water salinity significantly.

Evaporation is a crucial factor in the determining the required water supply for fish ponds in both humid and arid climates. Pond evaporation represented 66.2 percent of the total water loss from a channel catfish pond in Alabama, this percentage could be even higher in arid areas. The amount of water required to maintain water levels in ponds increases in drier climates, and consequently, increases water use and pumping cost per unit of production.

Some farmers continue to aerate ponds at times when dissolved oxygen concentrations are adequate. Restricting aerator use to only the period when oxygen supplementation is needed can conserve water and lessen energy for both aeration and pumping, thereby lowering production costs. The most efficient manner of balancing aeration use with need is to install automated systems for turning aerators on and off in response to dissolved oxygen concentration.

The change in turbidity during ON days than that in OFF days was not different among ponds with different numbers of Air-O-Lator units and the control ponds. Thus, the type of aerators used in this study does not increase water turbidity significantly. The NEC pond was more turbid than the C pond. Greater turbidity as a result of fertilization increased evaporation rates.

Increased aeration rate increases the evaporation rate, which in turn, lowers water temperature. A nutrient-enriched pond evaporates more than does an unfertilized pond. Economic benefits from reduced pumping costs may be obtained by restricting aeration to periods of need, particularly in regions where the water is scarce.

The most reliable means of controlling aerator operation to periods of undesirable low dissolved oxygen concentration is to use an automated system that turns aerators on and off in response to concentration monitored by an oxygen sensor that communicates with the aerator. The benefit of aeration for increasing fish production greatly exceeds the pumping cost to replenish water loss to greater evaporation. Producers should not lessen aeration use to the point that it results in excessively low dissolved oxygen concentration and fish stress.

There are many kinds of aerators and commercial ponds are usually aerated with larger units than used in this research; therefore, further work is required to study the heat loss and water loss caused by different aerator types. 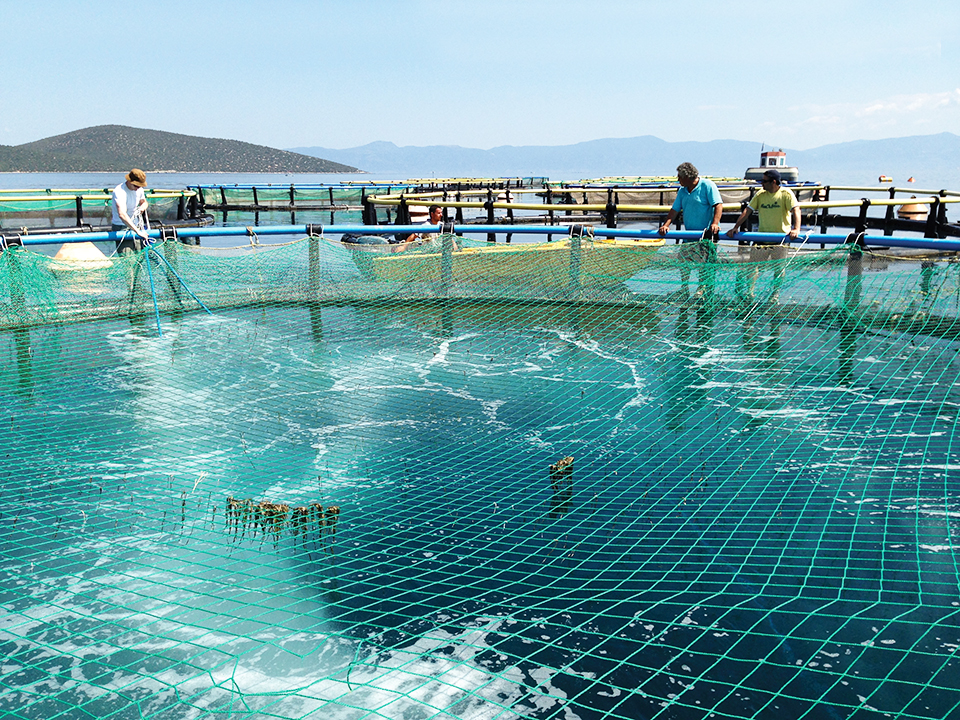