Over the years, techniques to feed shrimp in grow-out ponds have evolved from simple manual feeding (pellet broadcasting) to more automated forms, where specialized equipment distribute the aquafeed pellets based on the feeding activity of the shrimp. In Ecuador, historically the most-used shrimp feeding system is manual broadcasting (with or without witness feeding trays, used to monitor and adjust feed consumption), followed by the feeding system with using only feeding trays.

The feeding frequency is once a day in most cases, and to a lesser proportion, twice a day. The feeding rates used in the shrimp farms are those provided and recommended by the shrimp aquafeed manufacturers, or the ones developed over time by each shrimp farm itself based on its consumption history.

This feeding system and feeding management applied to large shrimp ponds has proven to be complex and inefficient to express the genetic potential of Pacific white shrimp (Litopenaeus vannamei) because it does not take into account physiological factors that are involved in feeding. One of these factors is the time of gastric emptying, and it is possible that aquafeeds are distributed inefficiently, with the corresponding environmental and economic consequences. This article discusses demand feeding through automatic dispensing systems to improve shrimp farming performance in Ecuador and is adapted from the June 2017 issue of Aquacultura (Ecuador).

There are numerous studies conducted on feeding frequency in L. vannamei; however, the results are not consistent. Some of the studies show there is a positive effect between frequency and shrimp growth, while others show there is no improvement with a higher frequency of feeding. It is very likely these contradictory results are due to the limitation in the number of times that the animals were fed daily and/or because feeding was not dependent on the demand by the shrimp.

However, with the introduction of different technological advances – such as sonic signal transducers, which monitor and report the sounds generated when the shrimp are in feeding activity – a radical change in the conclusions regarding shrimp feeding frequency is possible.

Napaumpaiporn and Churcild (2013), in a study conducted with L. vannamei, compared the efficiency of three feeding strategies: (1) manual applications four times per day; (2) automatic application using timers; and (3) automatic application by sound detection emitted when animals are feeding. Tests were carried out in 1-hectare, geomembrane-lined ponds stocked at 75 postlarvae per square meter.

At the end of the 120-day test, results showed that the daily growth of strategies 2 and 3 (0.21 and 0.24 g/day, respectively) were higher with respect to strategy 1 (0.18 grams/day). The final weight obtained with strategy 3 (24.5 grams) was significantly greater (p <0.05) than that of strategy 1 (15.9 grams). Although no statistical differences were found in terms of survival, a higher rate was observed with the sound detection system. The highest feed conversion was obtained with strategy 1 (1.6), significantly higher than for strategy 2 (1.4) and strategy 3 (1.3). Automatic feeding by sound detection produced a 10 percent increase in performance, compared to manual broadcasting.

Feeding on demand improves the productive indexes with respect to feeding one or two times a day; however, this strategy must be implemented with an aquafeed that fulfills the daily nutrient requirements of shrimp.

The effect of feeding as frequently as necessary and depending on the demand has been evaluated in different production environments. For example, in a 7-hectare pond that had been fed by manual broadcast once a day, a feeding system with sound detection was introduced at a shrimp weight of approximately 9 grams (day 62). As Fig. 1 shows, when feeding based on demand, a significant increase in the shrimp growth rate was observed, well above what would have been achieved by manually broadcasting feed just once a day.

The behavior of shrimp survival is also improved. When compared to day 55 with the estimated average survival curve in some shrimp farms in Ecuador, an increase of approximately 8 to 10 percent in survival can be observed from ten ponds fed on demand (Fig. 2).

In another evaluation carried out at a shrimp farm with an open water exchange system, the water was pumped from a stream into the reservoir channel and then distributed to the ponds. Average pond area was approximately 8 hectares, with depths of 80 to 120 cm. Pond stocking density was between 13 and 15 juveniles per square meter. The production cycles lasted between 98 and 126 days, with average temperatures of 28 degrees-C and salinity of 24 ppt.

Feeding areas were established in the ponds according to technical criteria that guarantee the best use of the feed by the shrimp. The feed was distributed by means of automatic systems provided with sound detection instruments. These systems dispensed the food depending on the demand of the shrimp, based on the sound the animals produced when feed is being consumed. Extruded feeds were used in these ponds, following a program of starter feeds with diameters between 0.9 and 1.6 mm and containing 42, 38 and 35 percent protein up to a shrimp size of 4 grams, and from that shrimp weight until harvest a 1.9-mm diameter grow-out feed with a protein content of 35 percent was used.

Substantial differences in performance were determined when comparing the averages obtained from four production cycles fed by broadcasting and three cycles using the on-demand feeding system (Fig. 3). The zootechnical results show that the growth in grams per week increased from 0.95 (manual feeding) to 2.1 (feeding on demand). Total production cycle weeks were reduced from 18 to 14, and with a higher average harvest weight (21 grams) for the on-demand feeding cycles vs. the manual feeding cycles (17 grams). The feed conversion factor was reduced from 1.5 to 1.3. The lower survival in the case of the feeding on demand cycles is explained because the shrimp were grown to a larger size of 21 grams, while in the manual feeding cycles the average harvest weight was 17 grams.

The effect of the nutritional density of manufactured aquafeed on the performance of shrimp fed on demand was also assessed using automatic feeding equipment with sound detection in a semi-intensive shrimp farm with natural productivity. At the end of this evaluation, a higher growth rate and an 18 percent increase in shrimp survival was observed, which is reflected in an increase of 340 kg of shrimp per hectare, equivalent to a 30 percent higher production (Table 1). This shows that just feeding on demand is not enough to increase the productive and economic indices, as the results clearly indicate that shrimp performance also conforms to the use of feeds that meet their nutritional requirements.

The demand feeding system – based on multi-rations and combined with sound detection – can be used to properly apply and distribute the correct dosage of aquafeed with high nutritional density, to adequately supply the daily nutritional requirements of the cultured shrimp. This has the objective of maximizing the shrimp growth required in the current production systems.

The improvements reported in the different assessments are in line with the expression of the genetic potential of shrimp. These improvements can be expressed only when the nutrition, the feeding strategy and the production conditions are adequate.

Finally, it is important to mention that a knowledge of the characteristics of the feeding equipment, with its correct location in the shrimp pond, are needed for and support achieving the maximum benefit of the aquafeed that is supplied to achieve high productive yields. 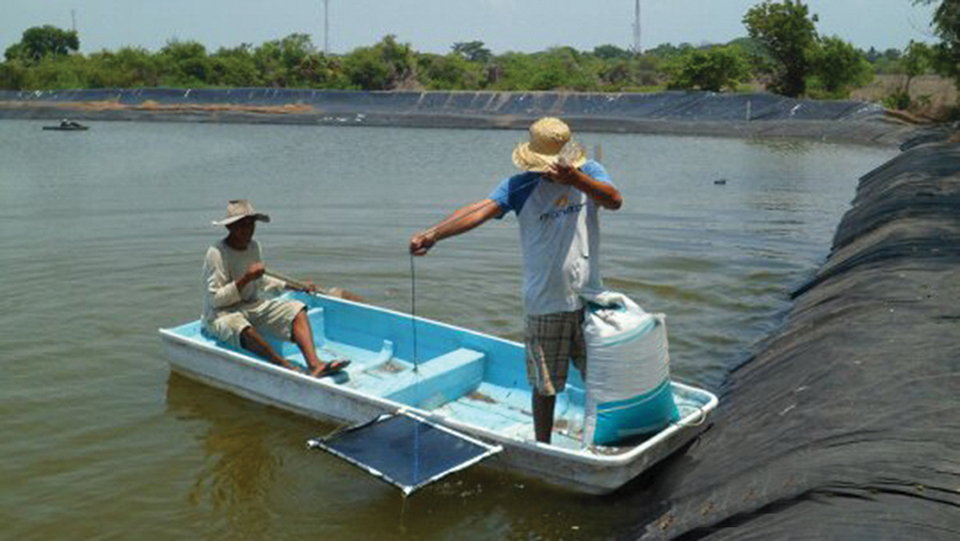