Cobia (Rachycentron canadum) is considered one of the most promising candidates for tropical and subtropical marine fish aquaculture in the world. Cobia aquaculture in cages began in the early 1990s in Taiwan and is relatively well developed in various Asian countries.

In the Western Hemisphere, cobia aquaculture is a promising industry. Early attempts to culture cobia in the United States began in the 1970s using eggs collected from the wild. Research accelerated in the late 1990s with the first successful spawns obtained from captive broodstock fish, and today the large body of knowledge on cobia culture in the United States continues to expand.

Supported by a grant from the U.S. National Oceanic and Atmospheric Administration, the University of Miami Aquaculture Program’s University of Miami Experimental Hatchery (UMEH) has during the last eight years been involved in basic and applied research to develop advanced technology that demonstrates the viability of raising hatchery-reared cobia.

In collaboration with the private sector, cobia are grown out in commercial submerged cages in exposed sites in Panama, Puerto Rico, USA and the Bahamas. Hatchery-reared cobia are also being cultured in traditional gravity cages in Belize, Panama, Brazil, Dominican Republic, Martinique and Mexico, and in recirculating system tanks in Bonaire, Netherlands Antilles and the United States.

The ability to artificially control water temperature to induce year-round volitional spawning of cobia will allow aquaculture production facilities uninterrupted access to viable cobia eggs for continuous production with no seasonal constraints. UMEH has developed a cobia-breeding program aimed at year-round control of the spawning cycle. Through implementation of a superior broodstock nutrition program and manipulation of water temperature, on- and off-season volitional spawnings of cobia were continuously induced from April 2008 to December 2009.

Temperatures in the maturation tank were maintained at 27 to 29 degrees C between April 2008 and April 2009, mimicking the natural conditions during the cobia spawning season. There were 17 spawning events during the off season between October 27, 2008 and April 3, 2009.

A slight decrease in fertilization was observed for the eggs produced from the off-season spawns, when fertilization rates averaged 89.48 ± 12.95 percent compared to average on-season fertilization rates of 93.97 ± 6.32 percent, but this decrease was not significant. To the best of the authors’ knowledge, this was the first time these methods were successfully applied to this species in the Western Hemisphere. Using the same protocol, the study was continued to December 16, 2009 and produced an additional 28 natural spawns.

A total of 108 on- and off-season spawns of cobia were obtained in a semi-recirculating conditioning maturation system at UMEH from April 2008 to December 2009, resulting in the production of over 200 million fertilized eggs. The eggs were used for larval-rearing trials at several academic and research institutions, as well as experimental and production trials in the private sector.

The authors have been working to improve methods for reliable cobia fingerling production since 2004. In initial trials, fertilized eggs were stocked at 400/L and incubated in 1,000-L cylinder-conical tanks with ﬂow-through seawater at 500 percent daily exchange. Moderate aeration and pure oxygen were used to maintain dissolved-oxygen concentrations above saturation. Hatching occurred 22 to 24 hours after fertilization.

Breakthroughs were achieved in hatchery technology for cobia in 2007. Two trials were conducted to test the effects of probiotics and stocking densities on larval survival and growth. In the first, probiotics were selectively incorporated into the live feeds (rotifers and Artemia). In the second trial, the larvae were stocked at different stocking densities.

During the density effect trial, two days post-hatch (DPH) yolk-sac larvae were stocked in four 12,000-L cylinder-conical tanks at 5 and 10 larvae/L. Beginning at 3 DPH, larvae were fed microalgae at low concentrations of 5-10,000 cell/mL and enriched rotifers at 3-5/mL through 9 DPH. Beginning at 7 DPH, enriched artemia nauplii were fed at rates of 0.1-1.0/mL.

The cobia larvae were reared at water temperatures ranging 24.3 to 31.8 degrees-C with water quality parameters within normal ranges for seawater. Vigorous aeration and supplemental oxygen were applied continuously during both larval-rearing trials to maintain adequate water movement and dissolved-oxygen levels of 7.0-9.0 mg/L. Water was ﬁltered down to 10 µ using sand ﬁlters and bag ﬁlters prior to filling the tanks. Daily water exchange rates ranged from 100 percent at 3 DPH to 500 percent at 17 DPH onward.

At 20- to 22 DPH, all postlarvae were fully weaned onto dry starting diets. Survival rates of postlarvae measuring 1.5 to 2.0 cm and weighing 0.5 g were estimated at 50 percent or greater. Further mortality during the nursery stage to 3- to 5-cm ﬁngerling size prior to shipping at 27 DPH brought the overall survival rate to an average of 25.7 percent.

Survival rates of ﬁngerlings cultured in tanks initially stocked at lower densities of 5 larvae/L were signiﬁcantly (P = 0.0078) higher. Although not evident from the results of the first trial, the use of probiotics could have contributed to the high production levels observed during the second trial. These trials produced 125,328 ﬁngerlings in four tanks in just two months (Table 1).

The larval husbandry methods applied are constantly refined. Some current research on larval rearing and nursery stages to 35 days post-hatch uses ultraviolet-treated flow-through seawater filtered to 10 µ prior to entering the tanks and ranging in temperature from 26 to 33 degrees-C. Daily water turnover rates have increased from 100 to 500 percent, to 300 to 1,500 percent. Concentrations of Brachionus plicatilis rotifers and artemia have risen from 5.0/mL and 0.1-1.0/mL to 5.0-10.0/mL and 0.5-2.0/mL, respectively.

Standard protocols for Isochrysis galbana and Nannochloropsis oculata microalgae include concentrations of 10,000 cells/mL. Cobia larvae are fed ad libitum using a “pulse feeding” technique in which feed is added three to six times a day, as needed, to maintain desired concentrations. Microalgae and rotifers are added between two and 10 days post-hatch.

All postlarvae are typically weaned onto commercial starting diets at 18 to 23 DPH, but Artemia are continually offered through an extended period from 8 to 28 DPH. During the weaning onto artificial diets, a critical period of mortality in marine fish larvae and postlarvae, survival rates as high as 90 percent are achieved. Survival rates ranging from 15.11 to 38.63 percent and 20.30 to 26.53 percent were achieved from egg to shipping-size fingerlings of 0.8 to 2.5 g in 2009 and 2010, respectively.

In addition to careful monitoring, routine cleaning, prophylactic baths of formalin with a parasiticide approved by the U.S. Food and Drug Administration, use of probiotics in the live feeds and high-quality weaning diets, the increased concentrations of rotifers and artemia and water exchange ratios, combined with an extended artemia period, led to the higher survival rates and excellent health of the 394,458 fingerlings produced during 2009 and 2010 (Table 1).

Table 1. Cobia fingerling production and survival rates at UMEH. Fingerlings are produced on demand, so the numbers could have been higher.

Generally, approximately 70 percent of the cobia fingerlings produced at UMEH are shipped to commercial companies like Open Blue Sea Farms in Panama, Antillana in Colombia, Marine Farms Belize in Central America and other private companies in the Caribbean and Latin America for growout in cages. The remaining 30 percent are retained for experimental trails at UMEH and several academic and research institutions to support scientific advances. Eggs have been stocked and fingerlings produced based on market demand.

The authors are currently focusing research efforts on the optimization of shipping methods for live cobia fingerlings and the use of hydrogen peroxide as an environmentally sensitive alternative to prevent and treat diseases outbreaks due to external parasites, bacteria and fungi. Nutritional trials are also studying the replacement of fishmeal with other sources of protein like soy.

Reliable fingerling production is the main bottleneck for commercial aquaculture of most high-value marine species. Technologies for reliable broodstock spawning and mass production of fingerlings have been mastered at UMEH, with routine conditioned spawns producing millions of high-quality eggs without seasonal constrains and survival rates up to 38.63 percent during the larval rearing through completely weaned juveniles.

Production of 10,000 to 20,000 stock-size fingerlings per 12,000-L tank has been consistently achieved at UMEH through research on early developmental stages and a proactive health management strategy that includes probiotics, prophylaxis and improved nutrition of live feeds. The levels of production achieved at UMEH are sufficient to support the development of commercial growout operations, academic and research institutions, and can be increased if demand rises. 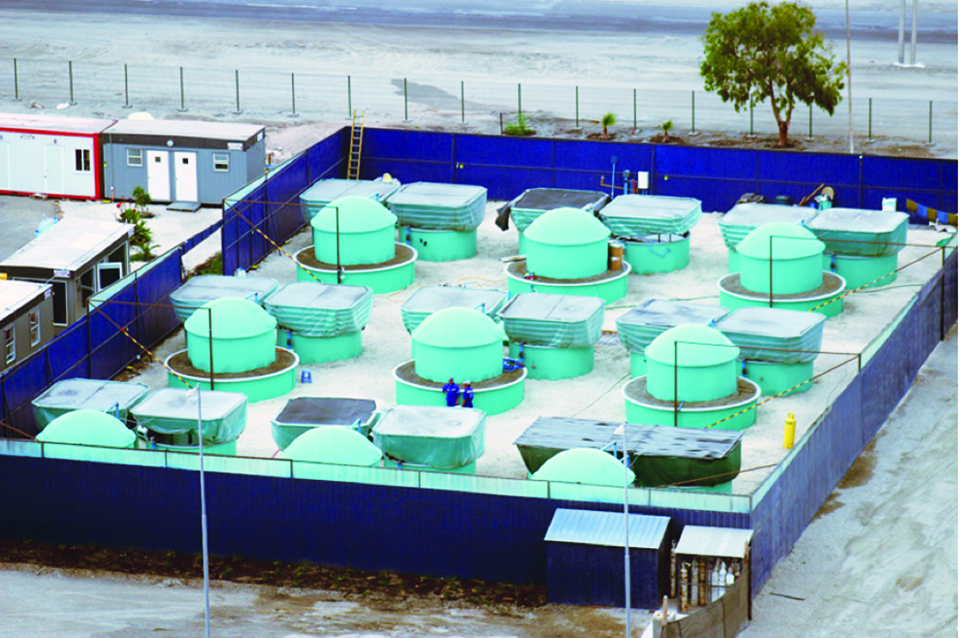