Dave Haider’s family has been in St. Paul, Minn., for generations. His great grandfather worked at the Hamm’s brewery in East St. Paul for more than 40 years. Until 2011, the brewery building had long been abandoned. Its savior? In part, Haider himself.

He’s president of Urban Organics, which turned the former brewery into an R&D site for an aquaponics farm. The operation has since expanded to an additional 90,000-square-foot facility (also located in a former brewery – this time Schmidt’s) that has a capacity of 300,000 to 350,000 pounds of fish annually. They’re already selling organic produce and plan to have its first fish harvest of Arctic charr ready for sale in spring 2018.

“We’re seeing an increasing number of consumers who want to know where their food comes from. They know it’s a safe, sustainable, natural food source,” said Haider of their product. So far, it hasn’t mattered to consumers that Urban Organics, which is selling a dozen varieties of leafy greens and herbs to consumers, businesses and hospitals, isn’t near the ocean, he said. East St. Paul had been classified by the U.S. Department of Agriculture as a food desert when they started work on the R&D facility in 2012. Of the relationship between fish and produce, he said, “It’s the perfect symbiotic relationship, and then at the end of the day, we get local protein and produce.”

You could have one of these facilities in the middle of Nevada in the desert because of the type of equipment we use.

“The ability to grow fish has been around since Roman times but over the centuries we’ve become more effective at using it,” he said.

That effectiveness includes knowing how fish growth and plants growth works together. “We have a better, more complete understanding of biological life cycle of the fish and agricultural requirements of the plants,” he said, which is not just sustainable but customizable.

“You could have one of these facilities in the middle of Nevada in the desert because of the type of equipment we use. You could have another one in New Jersey that would do totally different type of species and fix adaptability to the type of market they’re going to serve,” McElwee said. “It can serve any urban market in the country.”

Haider’s background is in construction (which he jokes he’s still doing with these renovations). Kristen Koontz Haider, a partner in the business and Haider’s wife, comes from the Minnesota Department of Agriculture. Chris Ames and Fred Haberman, also partners, have backgrounds in real estate and marketing respectively (and many of clients of Haberman’s marketing company are food companies).

Haider said they had to tinker with what exactly their local market wanted, and they’ve been working with local company The Fish Guys, their processing and distribution partner, to figure that out. In the R&D facility (which they still have and plan to use as an aquaponics facility), they started with tilapia but switched to hybrid striped bass because “that’s what the consumer wanted,” Haider said.

Same with the Arctic charr decision. Until the fish is ready to harvest, the business is driven by the sale of organic leafy greens (lettuce, kale, Swiss chard) and herbs. Most of their products, Haider said, are sold in 9-ounce packages for individual consumers through local grocery stores, but Urban Organics also provides bulk sales to local restaurants and a local healthcare provider, which uses their products in their cafeteria and patient meals. The Fish Guys anticipate selling their fish harvest to a variety of sources, including restaurants and grocery stores.

Haider doesn’t want the business to focus on plants alone, which he said many companies do because plants have a faster turnaround than fish.

“For a certain period of time, you might just be doing lettuce then switching over to parsley, basil, then some other type of herbs while still growing the same crop of fish,” McElwee said. “You’re able to balance your cash flow a lot better and show diversity in your business models.”

Haider didn’t think fish farming would be a tough sell in the Midwest – after all, he said, “we don’t have local fish.” But he sees potential for facilities like Urban Organics to take hold on the coasts because of concerns about overfishing, which residents of those areas are “seeing firsthand,” he said.

“I think in the next five to 10 years we’re going to see a lot more facilities like ours,” he said. 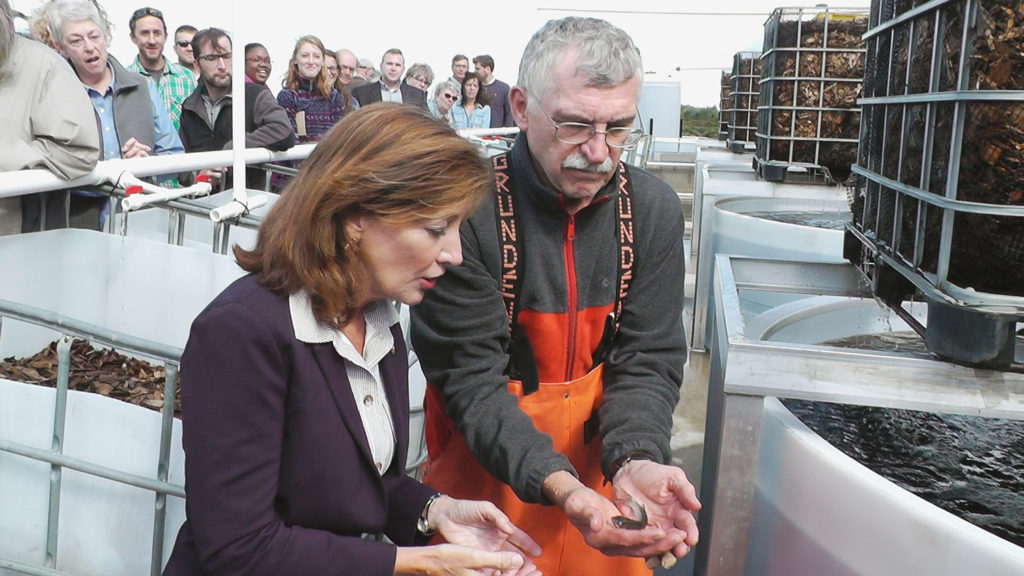