A quarter-century ago, German entrepreneur Franz Fix made a new home in the Dominican Republic, where he is now part-owner of a luxury hotel in the village of Cabarete. The Caribbean island nation’s northern shore is popular with windsurfers. The laid-back island life has allowed Fix to pursue a passion he’s had since age 7: breeding tropical, ornamental fish. In his own words, he’s one of those “weird fish guys.”

For the past four years, however, Fix has been growing a much bigger species than the common tetra, and potentially far more lucrative than koi. He’s farming one of the world’s top commercial food-fish species, the pangasius catfish (Pangasius hypophthalmus), which is native to the Mekong River in Vietnam and subject to intense scrutiny worldwide despite incredible popularity. The versatile whitefish is the sixth-most consumed fish in the U.S. market, even though most consumers have never heard of it. But because the Dominican is not half a world away from U.S. ports, Fix’s pangasius fillets can be shipped fresh, not frozen, to Miami in just 90 minutes.

This venture is no hobby. Fix has partnered with Patricio Mena, an engineer with experience in the Chilean salmon industry. He has lined up two U.S. seafood sales veterans — one on each coast — to spark interest in a market where fresh pangasius fillets simply don’t exist. The uniqueness of the product — which his newly formed team is marketing as Pure Caribbean Sutchi — is matched only, Fix contended, by the resources used to grow it.

“We are really lucky in many directions,” Fix said, referring to the farm’s geographic location, high water and soil quality and the government and community support where his company, Value Aquaculture S.R.L., now operates (Value is pilot project of the Kopejito association, assisted by Dominican government loans and other incentives to support responsible aquaculture and to create jobs). The ponds in which the fish are raised mimic the natural environment as much as possible. “Our fish ponds look more like biotopes than sterile fish ponds,” Fix said.

Switching the product name from swai to sutchi may also bring good luck. Both market names are accepted by the U.S. Food and Drug Administration (FDA), which oversees imported seafood. Despite its versatility and deep penetration of key international markets, common names like pangasius, tra and swai simply haven’t resonated with consumers.

The surprise aspect is a good thing — it differentiates us quite a bit from the Asian product. The biggest surprise, though, is when people try it. They say, ‘Wow, this is what it tastes like.’

Value Aquaculture is operating in Kopejito, in the Arroyo de Savanna area, using limestone-filtered mountain spring water that Fix said his company and others in the association have exclusive access to. The effluent from the sutchi farm fertilizes nearby rice fields and other agriculture. “Most importantly, we have the scale to grow and grow and grow,” Fix said.

Key to that growth, and crucial to maintaining a market for fresh fillets, is the ability to spawn the fish year-round. Pangasius typically spawn from spring to fall, and prefer to breed in their original habitat. The non-native species became a bit of a puzzle for Fix to solve. He pieced it together with hormone-induced spawning in the lab — using the FDA-approved human Chorionic Gonadotrophin or hCG — and by “tricking” the fish with artificial daylight, greenhouse coverage to keep water temperatures above 28 degrees Celsius and other measures to ensure breeding 12 months a year. It took these past four years for Fix to develop 800 breeders. Their offspring grow fast, taking about eight months from fingerling to market size.

In October, Dominican Republic President Danilo Medina Sánchez toured the Kopejito region where Value operates, and visited the farm to check on his investment. Aquaculture could be a boon for the region, where the abundance of farmers produce rice, but very few jobs and next to zero exports (the Dominican Republic exports only nominal amounts of seafood overall). Medina pledged to support the project by improving nearby access roads and building a pipeline for the mountain water, which Fix said is a key improvement and shows the government’s commitment to developing aquaculture.

“The water comes to us from the mountains, powered only by gravity. There’s no need for pumps” to move the water the 15 miles it needs to travel, Fix added, and no chance of the water getting contaminated by agriculture and livestock farms along the way. Value is in the process of applying for three-star Best Aquaculture Practices certification (hatchery, farm and processing plant).

Produced in close proximity to a potentially lucrative market, the fish is garnering interest from both retail and foodservice seafood buyers. Sean Bergen, owner of Sustainable Seafood Sales in Portland, Maine, is the exclusive U.S. distributor of the product. They enlisted the help of Sylvia Beaudoin, president of Wild Harvest Seafoods in Kenai, Alaska, to cover more ground. Interviewed in mid-December, Bergen said he first started importing the fish in July, and is bringing in 500 to 1,000 pounds a week into Miami. Value Aquaculture will produce 300 metric tons (MT) in 2015, Fix said, projecting annual capacity of 1,500 MT by 2017.

Wegmans, Giant Eagle, Sam’s Club and other retailers are kicking the tires, as are some distributors and restaurant buyers. Bergen said the product can be sold on its key differentiations: origin, freshness and the underutilized “sutchi” name.

“The surprise aspect is a good thing — it differentiates us quite a bit from the Asian product. The biggest surprise, though, is when people try it. They say, ‘Wow, this is what it tastes like,’” he said.

The flesh has a light orange, deep pink color that comes from the Brazilian maize in the feed. The feed formulation has recently been tweaked to include an American-grown white corn, which Fix expects will lighten the color of the fillets. “It’s all about eye appeal,” said Bergen, adding that early samplers have described the flavor as mild, sweet and buttery.

Despite its interesting back story, taste will ultimately be the true test for Caribbean sutchi, Fix admitted. “It can be as sustainable as anything,” he said, “but if it doesn’t taste good it’s not worth much.” 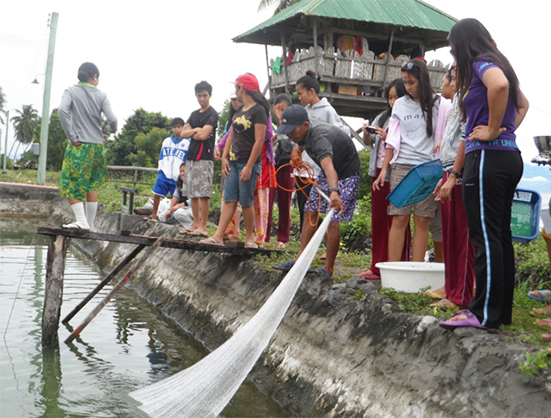 In this feeding study with Pacific white shrimp juveniles cultured at very high density in a closed system, results showed that continuous feeding with a high protein diet is less practical than feeding the shrimp with a low protein diet and under mixed feeding schedules.