Bacterial pathogens are a major concern for commercial aquaculture. Most pathogens relevant to aquaculture are opportunistic and constitute part of the normal microflora on animal surfaces and in their guts, and in water and soil. As long as water conditions, animal health and the microflora are stable, the likelihood of opportunistic pathogens to cause disease is low.

However, when conditions change, water quality deteriorates, and animal health is compromised. Opportunists take their chance, proliferate quickly and cause infectious disease. Thus, to control the level of opportunistic pathogens, maintenance of a stable environment and water quality is crucial.

Proper management techniques are a prerequisite. In addition, measures like vaccinations and antibiotics are applied, but they also have disadvantages. Vaccines are not available for every species and disease. They are very specific to distinct diseases, mainly those viral in nature, and not effective in shrimp. The efficacy of vaccines depends on many variables, such as the immune status and size of the animal, formulation, and the administration route and regime. Additionally, vaccination is expensive, labor intensive and stressful for the animals.

In the past, antibiotics were often used for growth promotion as well as disease prevention. However, uncontrolled use of antibiotics led to a rise in resistance phenotypes among bacterial pathogens. The continuous selective pressure not only triggered resistances, but also transmission of these resistances into the environment. Consequently, the application of antibiotics as preventative measures is controversial.

Today a range of alternative products is available to improve animal health, water quality and control pathogen load. The use of beneficial bacteria, or probiotics, is one way to maintain stable conditions and prevent opportunistic pathogens from taking over.

Farmed aquatic animals discharge feces, urine and uneaten feed into their culture water. When this organic matter accumulates, levels of toxic compounds increase, and water quality subsequently deteriorates. Thus, excess amounts of organic matter and toxic compounds need to be removed. Bacteria can aid this process. The use of plants or microorganisms like bacteria to remove waste products is called bioremediation.

A surplus of organic matter provides excellent growth conditions for opportunistic pathogens and sets the stage for infectious disease. Beneficial bacteria such as Bacillus species mineralize organic matter and thereby help to reduce the burden.

Nitrogen compounds such as nitrite, nitrate and ammonium ions originate from decomposing waste and animal excretions. When these compounds exceed certain levels they are toxic. Ammonium ions interfere with neuronal processes, and prolonged exposure to elevated nitrite levels causes slow suffocation, especially when oxygen is limited. Although unproblematic at low concentrations, prolonged exposure to nitrate can cause weight loss and render animals susceptible to infectious disease.

Hydrogen sulfide is used by several bacterial species. Of special interest are those in the Thiobacillus and Paracoccus genera. Thiobacillus species, for example, simultaneously remove nitrate and hydrogen sulfide in a process called sulfoxidizing denitrification and convert the compounds to non-toxic sulfate and nitrogen gas.

Pathogen antagonism is an essential feature of probiotic bacteria. In general, antagonism is achieved through competitive exclusion, which encompasses several mechanisms: production of antimicrobial substances like bacteriocins, production of organic acids that reduce pH in animals’ gastrointestinal tracts and thereby prevent the proliferation of pathogens, competition for adhesion sites and competition for nutrients.

Recently, a new approach has emerged in terms of pathogen antagonism: Disruption of quorum sensing, a bacterial cell-to-cell communication mechanism.

This mechanism allows bacterial populations to coordinate group activities, such as biofilm formation, virulence and production of antimicrobials and exoenzymes. These processes put a metabolic burden on the cells and are only worth initiating when the success rate is high enough. In terms of virulence, efficient and timely expression of virulence factors ensures that the infection is successful.

Researchers have identified and isolated various kinds of signal molecules. The most common signal molecules are acylated homoserine lactones (AHL) for gram-negative bacteria and small peptides for gram-positive bacteria. Modifications such as variation in the length of the carbon side chain of AHLs confer species specificity. Independent of gram classification, numerous species respond, detect or produce the universal signal molecule AI-2.

Genera such as the Vibrios employ signal molecules that are specific for a group of related bacteria. All these molecules provide information on the environment, species composition, presence of competitors for nutrients and metabolic status of the community.

The basic system for AHL signaling consists of a synthase for AHL production and a cognate transcription factor for AHL detection (Figure 3). Upon binding of the AHL, the detector will activate/deactivate target genes. More sophisticated multichannel systems were discovered in Vibrios. Here, different signals are detected by their cognate receptors in the membrane, and a regulatory cascade activates/deactivates target genes. Each signal has a specific channel, and information from each channel is converted into the same signaling cascade.

When communication is sabotaged, group activities cannot be coordinated, and traits that are regulated by Q.S. do not function properly. In the best case, quorum quenching renders bacteria less virulent and more vulnerable.

Several steps in Q.S. systems are targets for quorum quenching (Figure 3). When synthesis of signal molecules is repressed, cells are silent and unable to talk. If the target is signal detection, stability of the receptor is affected, or structurally similar molecules block access to the receptor binding site, but do not activate the receptor. Signal molecules can be destroyed by enzymatic degradation, and thus, messages never arrive at receiver cells.

Nature has already developed a variety of inhibitors produced by plants, bacteria and algae. For example, garlic contains compounds that block information flow, and the red macroalgae Delisea pulchra produces halogenated furanones that mimic signal molecules and prevent access to the receptor.

Bacteria have developed mechanisms to destroy and degrade AHLs. Several Bacillus species produce enzymes that hydrolyze the lactone ring of the AHL. Other species, like Ralstonia or Variovorax, produce enzymes that target the amide bonds of AHLs. Beneficial bacteria that not only target the growth of pathogens, but possess these enzymes can control pathogens in two ways. Growth is directly inhibited by the production of antimicrobial substances. Communication is also sabotaged to keep the pathogen under control.

During the last few decades, researchers have developed a plethora of indicator strains that express traits like light production, fluorescence or pigment production in the presence of Q.S. signal molecules. These indicator strains are employed for detection but also to investigate quorum quenching. Because beneficial bacteria produce antimicrobial substances, it is important to carefully determine whether the quorum quenching effect is in fact connected to a lack of communication or whether the effect is due to growth inhibition (Figure 4). 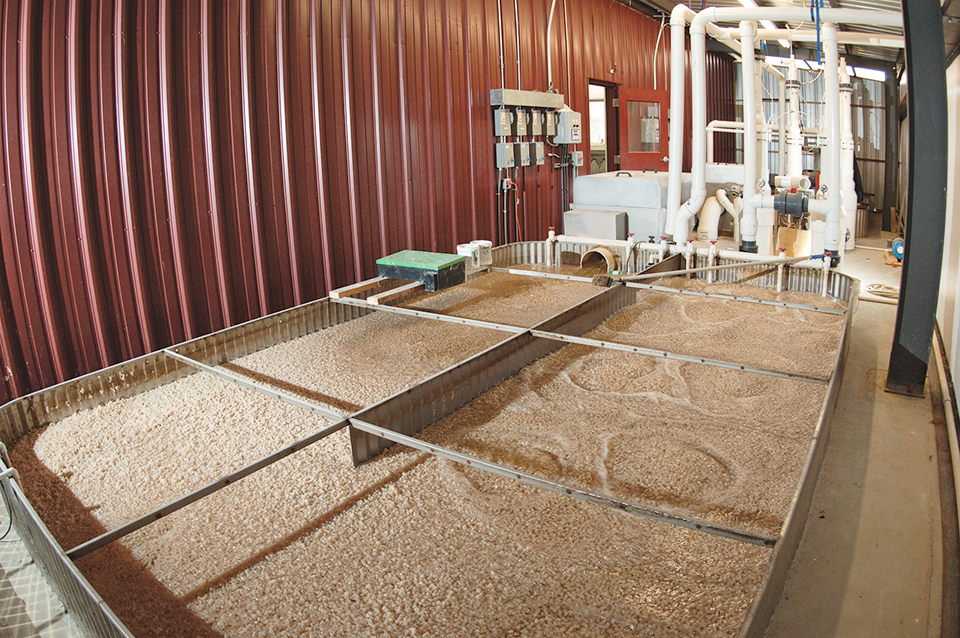 An important criterion when studying biofilters is the conversion rate of total ammonia nitrogen (TAN) to nitrate-nitrogen in production water. Although nitrification rates have been based on media surface areas, they do not always reflect the actual nitrification achieved. Volumetric TAN conversion rate is a direct measure based on filter volume.