Chef Barton Seaver: Criticism is often unfair and based on outdated information

The U.S. foodservice community at large believes that aquaculture should be judged by its potential to feed the world in an environmentally and socially responsible manner and not by the misgivings that dogged the industry in its infancy.

That was the No. 1 takeaway from an hour-long session on farmed and wild seafood at the 2016 NRA (National Restaurant Association) Show at McCormick Place in Chicago on Monday, May 23, which drew around 100 U.S. foodservice professionals. The NRA Show is the largest annual gathering of the foodservice industry, attracting more than 42,000 foodservice buyers and more than 2,000 exhibitors.

Though the title of the session, “Farm & Wild: The Great Fish Fight,” suggested otherwise, professional chefs are beginning to understand that aquaculture has improved greatly over the past 40 years, and they’re characterizing farmed seafood as a staple, not as an alternative to wild seafood. However, early criticisms of aquaculture linger today.

Fair or unfair, the reality is that chefs are yearning for more information on aquaculture, but the demand of running a kitchen day in and day out leaves little, if any, time for chefs brush up on the farmed seafood they’re sourcing, said James Griffin, associate professor at Johnson & Wales University, one of three panelists answering questions from Seaver.

Griffin pointed to a Global Aquaculture Alliance-commissioned survey that he fielded and analyzed late last year that found a vast majority of respondents, 86 percent, agreed that sustainability is an important factor when making purchasing decisions, and 91 percent of respondents agreed that suppliers enhance chefs’ confidence in purchasing decisions when evaluating sustainability. (For the survey, 85 professional chefs with five-plus years of seafood purchasing experience were polled; 82 percent had a culinary degree.)

However, 42 percent of respondents turn to the Internet more than any other source for information on seafood. So chefs care about sustainability, but they’re looking online – where misinformation on aquaculture is rampant – more so than their suppliers, said Griffin.

Quipped Seaver, “Facebook is not a good source of information on aquaculture.”

I’m not anti-beef. But I’m pro-diversity. And we don’t have that in our diets in America. The American diet is making us sick, and not eating enough seafood is keeping us sick.

“We have a very high level of respect from our guests. They think that we’re the ultimate authority. They believe that we can educate them on a variety of products, not just fish,” said Kerry Heffernan, executive chef and partner for Union Square Hospitality Group, whose company operates a dozen restaurants in the New York City area. “We have challenging jobs to begin with. We’re tasked with understanding and regurgitating science that we’re not in a position to do well, but we do the best we can. We take all the information we can get from suppliers and [nonprofit organizations].”

“The best way to sum it up is to look to [a supermarket chain] like Waitrose. They say sustainability is a license to operate. Their customers may not be knocking at their door asking them how they’re doing things. But they do know that their [suppliers] have their back,” said Redmond. “A lot of retail and foodservice [buyers] are looking for a solution not just because it’s an out, but because they’re looking for something that hasn’t necessarily hit them hard yet.”

Case in point: Last year’s Associated Press series on labor abuse in the seafood supply chain, specifically in forage fisheries and shrimp processing plants of Southeast Asia, caught many chefs and retailers off guard and tested their relationships with their suppliers.

It’s also forcing many chefs and retailers to question the meaning of sustainability. Seaver explained how his black-and-white perspective on farmed seafood progressed as he stepped away from restaurants and into his work with National Geographic.

“But we need to look at seafood within the context of proteins, which I don’t think we often do,” he continued. “And we get to a point where seafood looks pretty good. When we measure salmon as sustainable or unsustainable, we have metrics. But what we don’t do is relate it to beef. Because what I began to realize is that all those years I was scaring people away from farmed salmon I was pointing them directly back to beef. It’s not that there’s anything wrong with beef. I’m not anti-beef. But I’m pro-diversity. And we don’t have that in our diets in America. The American diet is making us sick, and not eating enough seafood is keeping us sick. 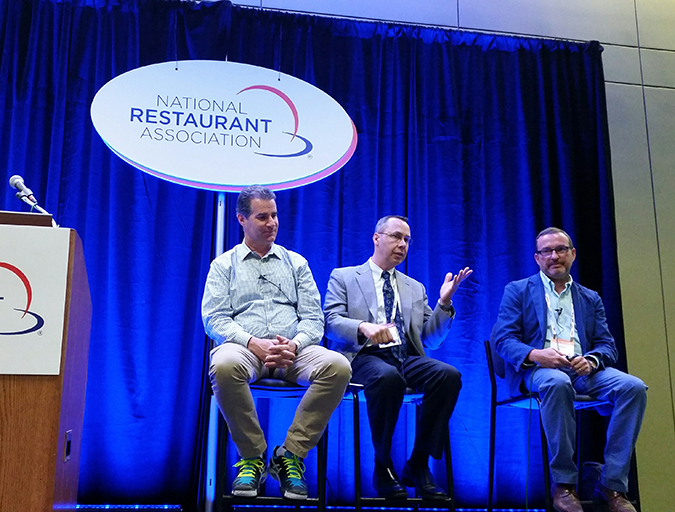 Ongoing research on foodservice professionals reveals ever-growing pressure on seafood suppliers to procure safe, sustainable and high-quality seafood and provide them with all the intricate information they may require. Chefs are pressed for resources and many lack the time to grasp this complex issue.