Various macroalgae or seaweed species have been used as human food in many countries, to replace animal ingredients in terrestrial animal feeds, as a source of pigments, to enhance antioxidant and anti-inflammatory activities, to improve gut function and for various other uses. Seaweeds are now also gaining increasing attention due to their abundant bioactive compounds that have shown benefits to some of the main aquacultured species like rainbow trout, sea bass, black tiger and Pacific white shrimp, among others, as dietary supplements that can improve aquafeed pellet quality, feed efficiency and animal product quality.

Several species of macroalgae have already been tested as potential ingredients in shrimp diets. However, we believe there are other macroalgae that may have potential as shrimp aquafeed ingredients, including economically important ones that should be tested simultaneously and compared regarding not just their nutritional performance, but also other potentially beneficial effects on cultured shrimp.

Samples of the macroalgae were supplied by the National Algae Project Technology Research Center of China and were dried and finely ground. Diet D1 was the control diet and had no macroalgae additions. Diets D2 through D5 diets were supplemented with added Porphyra haitanensis (PH), Undaria pinnatifida (UP), Saccharina japonica (SJ) and Gracilaria lemaneiformis (GL), respectively.

The feeding trial was conducted at Sanya, Hainan Province, China. Before the trial, L. vannamei juveniles were acclimated to a control diet for two weeks, and then 600 shrimp (individual weights 0.65 ± 0.01 grams) were not fed for 24 hours, weighed, and randomly distributed in 15 fiberglass tanks, and reared for 56 days and fed the control and experimental diets.

Our results showed that shrimp fed the Gracilaria lemaneiformis (GL) diet had the highest growth performance and were significantly larger than shrimp fed the control and the SJ diets, indicating that this seaweed is the most suitable one feed ingredient compared to the other three macroalgae we tested. Our data also suggested that there is a species-specific response to macroalgae and that even low-level inclusions of these seaweeds in shrimp diets had a general beneficial effect on our experimental animals.

Regarding the effect of the macroalgae on apparent digestibility coefficients (ADC) of the experimental diets – which reflects the levels of the digested and absorbed ingredient – our results showed that shrimp fed the PH, UP and GL diets had higher ADC of dry matter compared to shrimp fed the SJ diet. This relatively lower ADC of dry matter of SJ could be explained by its content of more indigestible polysaccharides and ash compounds, which are difficult to be digested by L. vannamei, as has been previously shown by other researchers. For protein ADC, the highest value was determined in shrimp fed the GL and UP diets, and the lowest ADC for protein in shrimp fed the control and SJ diets. The high protein ADC of the GL and UP diets is probably related to their well-balanced amino acid profiles.

In the White Spot Syndrome Virus (WSSV) challenge trial we carried out, shrimp were injected with the virus after the end of the initial 56-day trial, and shrimp started dying on the fourth day. Shrimp mortalities in challenged animals receiving the D2, D3 and D5 diets were significantly lower than in animals in control and the SJ diets during this challenge (P < 0.05).

The effect of macroalgae on intestinal microbiota of the experimental shrimp showed increased microbial diversity in shrimp intestines compared with the control group. The highest diversity [assessed using a common ecological diversity index, the Shannon Index] was observed in the GL diet group, followed by the UP, PH, SJ, and the control diet groups. Various studies have reported that diet and stress response can easily alter intestinal microbiota community composition, disturb intestinal homeostasis [steady condition] and influence anti-inflammation response.

Our results indicated that some unknown immunostimulant(s) in the macroalgae could act as a prebiotic [nutrients that stimulate growth of healthy bacteria in the gut] to support microbial homeostasis in the shrimp intestine. Also, our tests showed that dietary macroalgae additions resulted in modifying the intestinal microbiota of L. vannamei, increasing the relative abundance of beneficial bacteria such as Bacteroidetes, Firmicutes and Bacillaceae, and decreasing detrimental bacteria such as Gammaproteobacteria and Vibrionaceae.

Data from our study indicate that the dietary macroalgae tested, especially GL, can regulate intestinal community composition and can improve intestinal homeostasis. Intestinal microbes and their products are known to play crucial roles in the modulation of intestinal immune responses and are closely associated with the development of the animal’s immune system.

We observed that the resulting intestinal microbiota community compositions of L. vannamei juvenile shrimp with different species of macroalgae added to their feed were significantly different, as were their regulation of intestinal immune responses. Our data, including the results of a WSSV injection challenge test, suggest that dietary GL, PH, or UP could make a positive difference on shrimp health by inhibiting the WSSV-causing bacterium, by improving nutrition and by enhancing the shrimp immune responses. However, we believe the mechanism(s) by which dietary macroalgae can regulate the intestinal microbiota composition and maintain the intestinal homeostasis in L. vannamei merit further research.

In addition, the dietary macroalgae additions in our study enhanced hepatopancreas immunity through various antioxidant mechanisms and reduced damage to this organ in our experimental L. vannamei juveniles. Overall, our results indicate that an optimal inclusion of various macroalgae species could contribute to attenuate hepatic oxidative damage by improving the hepatopancreas antioxidant ability and immunity, as well as regulating the intestinal microbiota in L. vannamei. And our data suggest that G. lemaneiformis (GL) is the most suitable macroalgae for inclusion in L. vannamei diets, followed by U. pinnatifida and P. haitanensis.

In addition, dietary inclusion of macroalgae modified the intestinal microbiota of L. vannamei by enhancing the relative abundance of members of bacterial phyla like Bacteroidetes and Firmicutes, and the family Bacillaceae, while decreasing the abundance of the class Gammaproteobacteria and the family Vibrionaceae.

Our data suggest that the dietary inclusion of various macroalgae species could serve as functional ingredients or have a prebiotic-like role for preventing intestinal oxidative damage in L. vannamei shrimp, whether under normal culture or while facing WSSV challenge conditions. 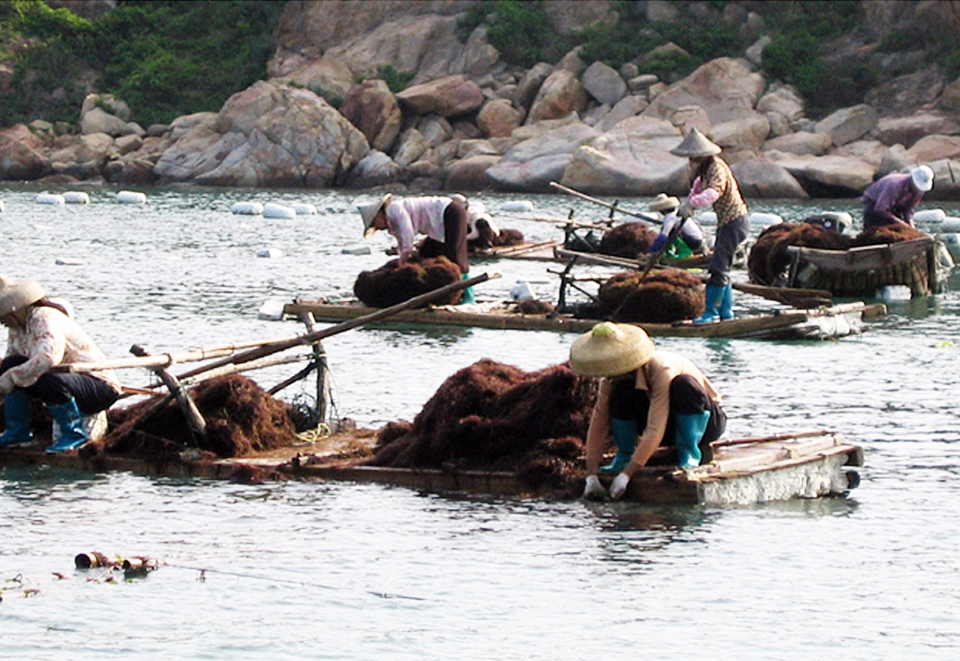 Large-scale Gracilaria cultivation can be an effective means of improving water quality and promoting a more sustainable mariculture industry in China. 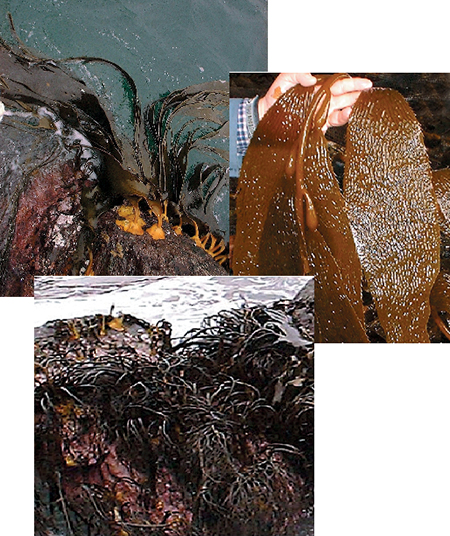 Seaweed farming in Chile: A review

Over the last 15 years, seaweed farming in Chile reached a volume of over 300,000 metric tons per year, half brown algae and half red algae. 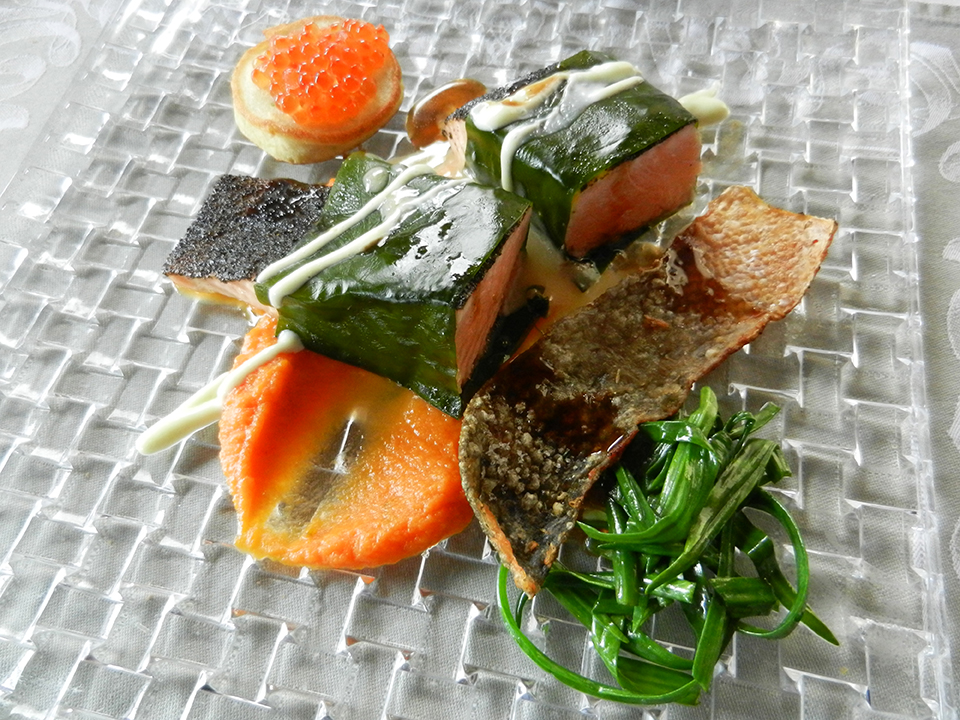 Seaweed aquaculture represents approximately half of the world mariculture production, but since seaweed farming is mostly concentrated in Asian countries, there is a lack of appreciation for this resource in the Western world.