Relatively little is known about the species’ specific requirements

The arapaima (Arapaima gigas), also known as pirarucu or paiche, is one of the largest freshwater fish of the world. In its natural habitat, the Amazon basin, the air-breathing, piscivorous species can reach lengths of more than 3 meters. The fish are well known to local fisheries and are an important local food.

During the last few decades, the depletion of natural stocks forced the species toward extinction in some areas. Today it is listed in the CITES Appendix II with an estimated population of 50,000 to 100,000 individuals in the Amazon basin. The culture of arapaimas could help meet the growing consumer demand, but relatively little is known about the specific requirements of the species and effective rearing techniques.

Arapaima aquaculture has so far been limited to extensive pond systems and small quantities (Fig. 1). Still, arapaimas have been introduced to tropical areas in countries such as Mexico, Thailand, Malaysia, Singapore and Taiwan, and activities to intensify production can be observed in these regions.

At the same time, fisheries landings have stagnated after reaching a peak in 2006. Since the aquaculture sector has not caught up with the increasing demand for arapaima meat, it is often difficult to find the fish in markets. Although most arapaima meat production is focused within its natural distribution area – Brazil and Peru with a local contribution in Colombia – South Asian countries have successfully established an expanding ornamental market, as well as tourism related to game fisheries, and are currently increasing live fish exports on a global scale (Fig. 2).

Arapaimas have all the characteristics needed for greater aquaculture production, and market studies have shown the potential for local and international markets that appreciate the nutritional and culinary value of the fish. Arapaimas offer appealing flesh color and texture, low fat content (about 1 percent compared to 2 percent in tilapia or 7 percent in trout) and a high protein content reflecting about 20 percent of muscle tissue. High levels of omega 3 and 6 polyunsaturated fatty acids have also been reported in the fish.

Since arapaimas have no intramuscular spines, their meat is easily processed. Due to their large individual sizes, arapaimas deliver meat in versatile portions, including unique “T-bone” steaks. Consequently, consumers are predicted to pay high prices, as recently reported in a study from the UNCTAD/BioTrade Facilitation Programme. The average price for arapaimas in South America is $15-20/kg.

Furthermore, arapaimas offer a range of other products. The demand for juvenile arapaimas as ornamental fish is high – especially in Hong Kong, Japan and the United States – and a European market is starting off. Arapaima scales are currently traded in substantial quantities for arts and crafts, and the skin delivers an exotic leather. The fish are also playing an increasing role in game fisheries, not just across their native distribution, but also in countries where the species has been introduced, such as Thailand or Malaysia.

The development of arapaima aquaculture is currently impeded by the shortage of juveniles, which is caused by the lack of control over the reproductive cycle. Presently, stocking material originates from spontaneous reproduction in pond systems or wild-caught juveniles.

Recirculating aquaculture systems (RAS) allow the manipulation of rearing conditions as well as better handling of spawners, a prerequisite for gaining control over the reproductive cycle. In addition, such systems minimize the threat of escapes, which is becoming increasingly important with regard to the essential standards imposed by importers and large retailers.

Supporting sustainable production with reduced emissions to the environment, RAS technology may actually initiate a synergism between the current research needs in South America and the recirculation aquaculture emerging in Europe and North America. Evolving technologies like aquaponics need new, fast-growing tropical species to support the nutrient demands of the plant crops.

Due to its outstanding growth performance – reaching 15 kg final size within the first year after hatch – and its air-breathing mechanism, the arapaima appears to be a promising candidate for intensive aquaculture. In addition, it is highly tolerant of high ammonia levels and other critical water parameters. The absence of cannibalism within single year classes and the gregarious nature of the fish during grow-out avoid problems commonly encountered in the culture of piscivorous species.

Arapaimas have a high potential for RAS-based production, but, as a prerequisite, control over their reproductive cycle has to assure multiple, controlled reproductions to allow for year-round production.

Beyond the potential in classical aquaculture dedicated to meat production, fingerling production is a main obstacle for ongoing conservation programs. Currently, national restocking measures are rare and commonly performed on a small-scale community level, as stocking material is limited and expensive.

Regarding the consumer awareness in Europe and North America, such marketing strategies particularly need to address fishmeal utilization in aquafeeds, raising the topic of fishmeal replacement. Juvenile arapaimas seem particularly well suited for plant-based diets, since fruits and seeds are routinely found in the stomachs of wild-caught fish. Although comprehensive data based on feeding trials are scarce, observations from farmed fish are promising.

At present, the reproduction of arapaimas is limited to natural spawning and extensive culture. Therefore, the successful exploitation of arapaimas in aquaculture will require a holistic research strategy targeting reproduction, nutrition and growth in order to deliver reliable protocols for farmers.

Solving these problems, especially reproduction, alongside a marketing strategy promoting the nutritional and culinary value of arapaimas, as well as sustainable production technology, could pave the way toward a bright future for this species in aquaculture. 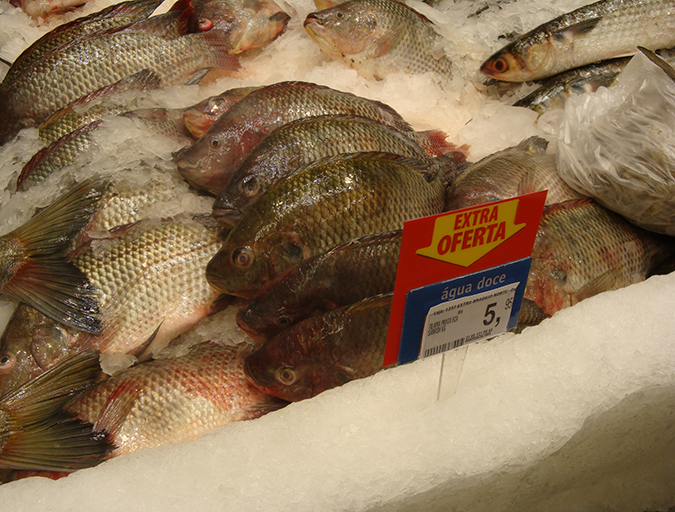