The Asian sea bass (Lates calcarifer) is a euryhaline species that belongs to the Centropomidae (snook) family. It is widely distributed in the Indo-West pacific region, from the Arabian Gulf to China, Taiwan, the Philippines, the Indonesian archipelago, Papua New Guinea, and northern Australia. The species is known by various common names in different parts of its range, including “barramundi” in much of Asia, and “barramundi” (aboriginal for giant perch) in Australia and Papua New Guinea.

Barramundi supports important commercial and recreational fisheries throughout its range, and has developed into a mature aquaculture industry. Barramundi aquaculture industries are well established in Thailand, Malaysia, Singapore, Indonesia, Hong Kong, Taiwan, the Philippines and Australia.

Techniques for the propagation of barramundi were originally developed in Thailand in the 1970s and further advanced by research in the Philippines, Singapore, Hong Kong, and Australia (Grey 1987). With the exception of Australia, most barramundi are farmed in cages in freshwater or brackish water ponds, or in sea cages. In Australia, a number of indoor, closed-system barramundi farms have been established with controlled-environment buildings, using underground fresh or brackish water and recirculation technology.

Early work on the culture of barramundi relied on the use of fertilized eggs obtained from stripping males and females caught in estuary spawning grounds. However, hormonal treatments developed during the 1980s have become a standard procedure for many barramundi farms (Garcia 1990).

Barramundi broodfish may be kept in either fresh or saltwater, but must be placed in saltwater (28 to 35 ppt) prior to the breeding season to enable final gonadal maturation. In parts of Asia, barramundi are still induced to spawn by manipulation of environmental parameters, which simulate the migration of the species to the lower estuary and subsequent tidal regime at the time of natural spawning.

Salinity is gradually elevated in the brood tanks until full seawater is achieved. Once fish behavior indicates that spawning may be imminent, the tank temperature is raised to 31 to 32 degrees-C. The tank temperature is then dropped to 27 to 28 degrees-C to simulate tidal fluctuations in the lower estuary. Generally, most fish subjected to this technique will spawn.

More commonly, mature barramundi are spawned using a range of exogenous hormone preparations that are administered by injection, slowrelease cholesterol pellets, and osmotic pumps (Garcia 1989). The most common hormones are the luteinizing hormone-releasing hormone analogues (LHRHa) (Des-Gly10) D-Trp6, Pro9- LH-RH ethylamide, given at dosages of 3 to 5 micrograms per kilogram body weight for females and 40-100micrograms per kilogram for male barramundi (Almendras et al. 1988). Female barramundi broodfish generally average 2.5 to 6 kg and males from 2 to 3 kg. Females of this size can spawn up to five times after hormonal treatment and produce from three to 15 million eggs. Larger females produce considerably more eggs, with 35- to 40-kg females averaging around 45 million eggs per induced spawn. Hatching rates for barramundi spawned using hormonal manipulation range between 0.1 and 85 percent.

Most hatcheries have opted for a “green water” culture methodology, which maintains a microalgae concentration of Nannochloropsis oculata and/or Tetraselmis sp. in densities of 1 to 3 x 105 cellmilligrams per liter of culture water. Larval barramundi begin feeding around 50 hours after hatching, at temperatures of 26 to 30 degrees-C and salinities of 28 to 31 ppt. It is best to have food available prior to first feeding (Parazo et al. 1990).

The cladocerans Daphnia, Moina and Diaphanosoma have been used to supplement, or replace, brine shrimp as prey for intensively reared barramundi larvae. These species of zooplankton may be fed to barramundi from day 15, although they are more commonly used as a brine shrimp replacement from day 25.

A more recent development in larval rearing of barramundi involves extensive culture of day-old fish larvae in marine or brackish water ponds. Blooms of phytoplankton and zooplankton for feeding larvae are induced in ponds via the addition of organic and inorganic fertilizers (Rudledge and Rimmer 1991). Barramundi larvae are stocked in ponds at densities of 400,000 to 900,000 fish per hectare to coincide with peak densities of the smaller zooplankton-rotifers and copepods, which proliferate six to nine days after fertilization.

Juvenile barramundi (1 to 2.5 cm total length) are transferred to nursery facilities after being harvested from rearing ponds or intensive culture tanks. If stocked directly in growout ponds, barramundi may be difficult to sizegrade. For this reason, cage culture in ponds or tank culture is more useful for the nursery phase, where cannibalism is a major cause of mortality. Cannibalism can be reduced by grading the fish every six to nine days, to ensure that the fish in the nursery system are similar in size.

Stocking densities of 80 to 100 fry per square meter are customary for cages for 30 to 45 days, or until the fingerling stage of 5 to 10 cm, where they can be graded and stocked in grow-out systems. Barramundi greater than 1 cm in length can be transferred from salt to freshwater in as little as 6 hours with no significant mortality.

Many barramundi farmers use fresh water for growout and therefore find it beneficial to use the same site for nursery culture. Barramundi can be weaned to artificial diets at 1 cm size. However, fish in the range of 1 to 2 cm show faster acceptance of artificial diets and better survival.

Barramundi is cultured in southeast Asia using mostly extensive or semi-intensive technology, depending on the local market structure for sale of the fish, cost of feeds, and local infrastructure. Pond culture in these countries may use a stocking density of 2,000 to 3,000 fish per hectare, with harvest sizes ranging from 250 to 700 after a nine- to 12-month growout.

Cage culture farmers in Malaysia, the Philippines, and Thailand stock anywhere from 12 to 300 juvenile barramundi per square meter, depending on water quality and environmental conditions at the site. More fish are stocked in floating cages than in stationary cages because they are usually in sites with deeper water, lower salinity fluctuations, and better circulation of cleaner water.

Trash fish is the feed of choice for barramundi culture in most of southeast Asia, although some dry diets have been formulated (Aldon 1997). Seasonal variability of trash fish greatly impacts the growth rate achieved in this type of culture, with typical food conversion rates averaging 4:1 to 10:1. Average growth rates approximate 1 kg per year with survivals between 80 and 90 percent.

Australia has developed barramundi culture to a much more technical state through research and experimentation from both private and government institutions. There are three methods of growing barramundi in Australia.

The first is brackish water or freshwater pond culture, where usually the fish are maintained in cages to facilitate culling and harvesting. Some largescale cage production in estuarine waters is still practiced; however, difficulties with environmental issues and permitting have discouraged this type of culture. The third growing method is intensive production in recirculating indoor facilities.

Using this method, year-round steady-state production is possible and environmental concerns are avoided. Cage facilities stock as many as 100 kg of fish per square meter cage surface and cull to a harvest biomass of 30 to 50 kg per square meter. Recirculation facilities average 60 to 80 kilograms per square meter harvest density of fish using European recirculation technology initially developed for high-density culture of eels.

Most recirculation farms culture plate-sized barramundi (350 to 1,000 grams) obtainable after six to eight months in culture. Some cage farms culture larger fish (up to 2 kg) for a select fillet market.

The development of high-energy feeds has increased the productivity of the Australian barramundi industry (Catacutan and Coloso 1995). Fish growth is maximized with high-protein diets (>55 percent) and energy levels (digestible energy) of at least 18.0 megajoules per kilogram or higher (Williams et al. 1997). These diets have lowered the food conversion rate to 0.75: 1 through weight gains of 2 percent body weight per day.

The high market value of barramundi has fueled the aquaculture of this species in Australia to a greater degree than other producing countries. Ex-farm price of barramundi in Malaysia, Thailand, and the Philippines is generally under $1.00 U.S. per kilogram (Buendia 1997). Only Hong Kong and Singapore markets for live barramundi command high prices, but these are relatively small niches (Surtida 1997). Australia possesses a very large fresh seafood demand, and this demand is chiefly responsible for the tremendous growth of barramundi farming. The wholesale market price for barramundi has stabilized at $5.20 to 6.30 U.S.per kilogram for the last few years, having come down due to increased production from $11.50 U.S. per kilogram in the early 1990s (Anderson 1998).

The principal growing areas of Australia produced 624 metric tons (MT) of barramundi during the 1996-1997 growing season, valued at $3.7 million U.S. Gilled and gutted fish generally sell for $2 per kilogram more than whole fish.

A profile of the economics of recirculating barramundi systems in Australia shows classic economy of scale returns. A 30-MT per year production facility will cost around $460,000 in capital investment, and require a break-even selling price of $4.90 per kilogram, whereas a 100-MT barramundi farm will cost around $860,000 in capital investment but demonstrate a break-even price of $2.89 per kilogram. Obviously, the larger farm merits attention in terms of risk management for any possible market price decline.

With over a third of the current increase in Australian production of barramundi coming from recirculating systems, it is clear that the economics for this type of culture are highly favorable. New developments in genetics and growth hormones for barramundi are already showing favorable results for lowering the production costs and further increasing profit margins (Anderson 1998). Note: Cited references upon request to the author. 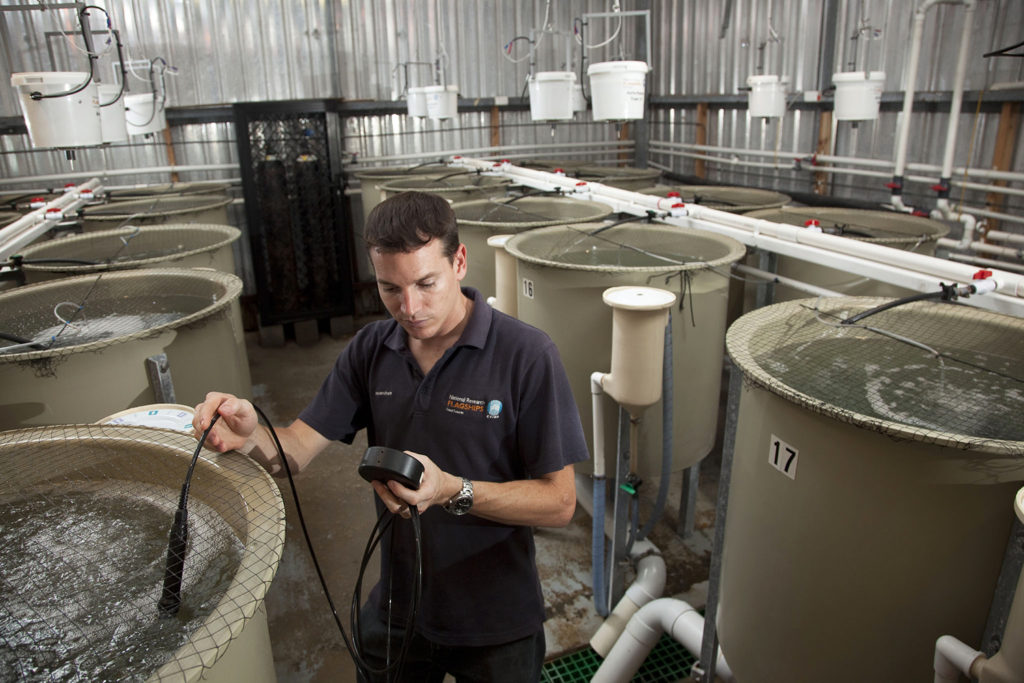