DNA microsatellites allow many families to be reared together, for individual sorting later on

The tropical abalone (Haliotis asinina) is the overlooked sibling of the temperate abalone that form a lucrative industry. Despite the fast growth of H. asinina, commercial farming of the species has been slow to progress. However, research in Australia may be about to transform this species into a more palatable proposition for farmers.

H. asinina has innate features that are highly desirable for aquaculture. Naturally synchronous spawning every two weeks in wild-caught broodstock supports many simultaneous cross-fertilizations. The fastest growth rate of all abalone allows H. asinina to reach sexual maturity within one year. This means gains can be made at least twice as rapidly as in the more slow-growing temperate species.

According to quantitative genetics textbooks, variation in animal size is due to a combination of genetic predisposition between families and environmental influences. If families can be created at the same time and reared together, the environmental component is reduced, making the genetics easier to evaluate.

The problem commonly faced is that microscopic larvae cannot be physically tagged, so they cannot be pooled until they are older. DNA microsatellites, however, can be used to trace family pedigrees and are very useful tools in this type of research. They allow many families to be reared together, knowing that individuals can be sorted into families at any time. Microsatellites also allow tracking of the genetic diversity in domesticated populations, which can help anticipate and prevent inbreeding.

Research by the authors has shown that H. asinina has a lot of genetic variation, which can be exploited to achieve increases in growth rates when domesticated. The authors recently started work at the University of Queensland and Bribie Island Aquaculture Research Centre to evaluate how much variation in growth is passed on through generations of Haliotis asinina.

Eighty-four separate batches of eggs were fertilized simultaneously and mixed together to form a cocktail of larvae with various genotypes. The abalone were grown for a year, then measured and photographed before being snap frozen.

DNA samples were taken to identify family origins using microsatellites, then the families were compared against each other. As it turned out, the parents of the abalone had a significant impact on their size, indicating that inheritance played a significant role in size determination, and selective breeding could hence be successful.

Importantly, though, not all big abalone were from the same families. This meant within-family variation could be used to achieve gains in selective breeding while maintaining a high proportion of the original genetic diversity, hence avoiding inbreeding.

After realizing that tropical abalone would make a useful subject for a full-scale selective-breeding project, the authors want to know why the abalones in the fastest-growing families are doing so well. To answer this question, a closer look at the molecular processes at work is required.

DNA microarrays allow comparisons of the activity of thousands of genes between animals of interest in one simple experiment. Each growth-related gene has at least one specific purpose in a complex feedback system that starts with a few key “administrative” genes and flows through to genes involved in “labor” such as metabolic processes. The molecular machinery can be literally frozen in time by immersing whole abalone in liquid nitrogen and storing them at minus-80 degrees-C.

Basic analysis of microarray data can reveal consistent differences in productivity in some of the genes between fast- and slow-growing animals, indicating that those genes are somehow involved in the growth process. If the genes’ genetic codes are determined and compared to a database, it is likely some will match or almost match known genes in other animals.

In this way, researchers can guess what the genes’ functions might be to weed out the laborers and focus on the administrators. More thorough analysis might lead to a greater understanding of how the genes and cells work in concert to produce the cellular symphony of growth.

By learning more about the key genes involved in growth, it should be possible to identify fast-growing animals from wild-caught populations by looking for good “administrators” among their genetic make-up. This could be handy when choosing broodstock at the beginning of a selective-breeding program, reducing the considerable cost required to achieve gains in domesticated lines.

Another possible use for this knowledge is gene insertion. If extra copies of genes naturally found in a species, as opposed to genes from other animals, can be artificially introduced, controversy over genetically modified organisms might be reduced. 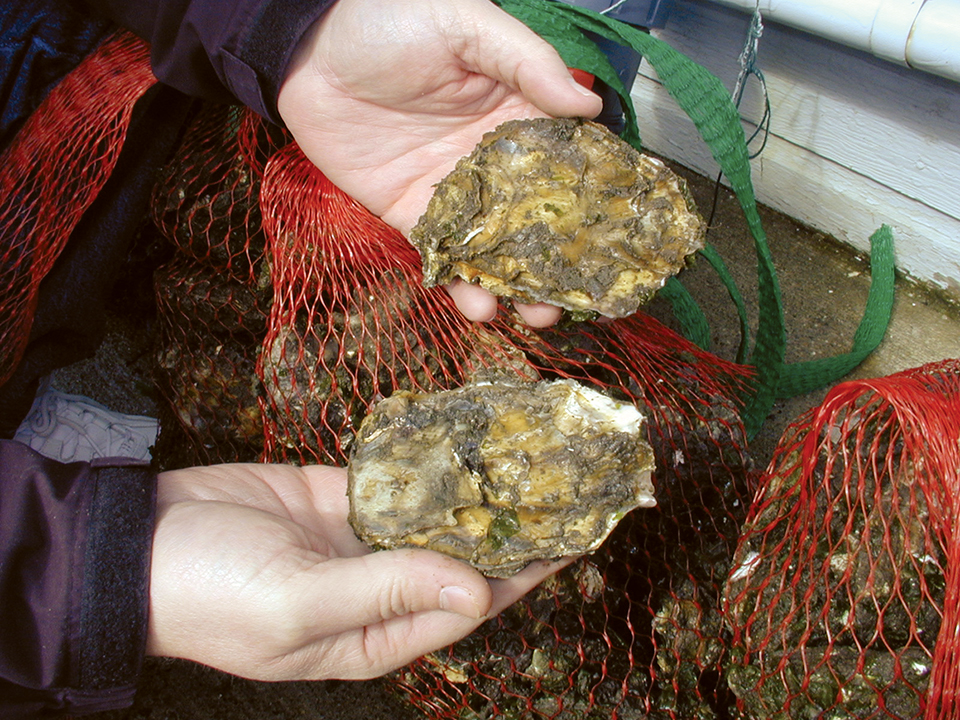 V. parahaemolyticus presents a food safety hazard for those who consume raw shellfish. The organism can grow post-harvest in some shellfish species, especially oysters.