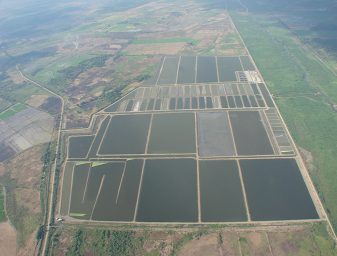 Iron is an essential element for bacteria, plants, and animals. Many enzymes important in energy transformations contain iron. Iron forms the center of the hemoglobin molecule important in oxygen transport in the blood of vertebrate and some invertebrate animals. Iron also plays an important role in photosynthesis by plants. Thus, iron plays a role in aquaculture.

Iron is the fourth most abundant element in the earth’s crust, but it is present in surface waters and in the ocean at a very low concentration. The reason for the low concentrations of iron in surface waters lies in the insolubility of iron minerals. The main sources of iron are oxides such as hematite and magnetite, but soils contain a variety of iron oxides and hydroxides.

In water containing dissolved oxygen, the solubility of iron is governed mainly by pH. The concentration of ferric iron (the trivalent, oxidized form) will seldom exceed 2 mg/L unless the pH is below 4. Nevertheless, freshwaters may contain up to 1 mg/L or more of dissolved iron, because iron forms soluble hydroxides and ion pairs, and it also forms soluble complexes with dissolved organic matter (chelated iron).

It has been calculated that iron concentrations in natural water and in the soil solution would be too low to support plant life if not for soluble non-ionic forms of ion that are available to plants. Nevertheless, iron is a limiting factor for aquatic plant growth in some freshwaters – especially clear waters that have little dissolved organic matter. Iron is typically not included in fertilizers for freshwater aquaculture.

The sea has an average dissolved iron concentration of 0.01 mg/L (10 mg/L). There is speculation that iron is a major factor limiting phytoplankton productivity in the sea. There have been serious proposals to fertilize the sea with chelated iron to increase phytoplankton productivity and enhance carbon dioxide removal from the atmosphere through sequestration in organic matter.

Iron fertilization is more common in aquaculture ponds filled with saline water. For this application, iron usually is chelated with citric acid, ethylenediaminetetraacetic acid (EDTA), or triethanol amine to make it more soluble.

Iron is reduced to the divalent ferrous form in oxygen-depleted water. Groundwater that often is devoid of dissolved oxygen may have high concentrations (20 mg/L or more) of ferrous iron. If such water is exposed to the air, it absorbs oxygen and the ferrous iron is oxidized to ferric iron – usually in the form of an iron hydroxide precipitate. In ponds supplied by well waters containing ferrous iron, the resulting precipitate settles to the bottom and causes little or no problem.

In ponds that are not aerated and stratify thermally, high iron concentrations often occur in the lower layer of water (the hypolimnion). When such ponds destratify, oxygen is removed from the water through reaction with ferrous iron. This process can result in a considerable decline in dissolved oxygen concentration following sudden thermal destratification.

If water containing a high concentration of ferrous iron is used in intensive culture tanks or in hatcheries, the formation of iron hydroxide can be problematic. This precipitate can settle on eggs and damage or kill them, and it can clog the gills of fish or shrimp. Water from wells of elevated iron concentration can be aerated thoroughly by allowing it to fall through a series of screens or other media to effect oxygenation and oxidation of ferrous iron to iron hydroxide. Sedimentation may be used to remove the iron hydroxide precipitate, but faster removal can be affected by sand filtration.

In anaerobic sediment, pore water may have a high concentration of iron – especially in sediment of fairly low pH. Shrimp burrowing in such sediment may accumulate occlusions of iron on their gills or blotches of iron on their exoskeleton that lessens their market quality.

When ponds with high iron concentration in bottom soil are drained and their bottoms dried, there will be a reddish layer of iron hydroxide over the bottom. Although this is not a harmful situation in itself, it often indicates that the sediment is acidic and would benefit from liming.

In some coastal areas, soil at a depth of 0.5 to 1 m below the surface, may have iron pyrite concentrations of 1 to 5 percent or more. This situation is particularly common in and around mangrove habitat and other coastal wetlands. When exposed to the air, iron pyrite oxidizes to form sulfuric acid and iron oxides. Such soils are known as acid-sulfate soils. Ponds built in acid-sulfate soil typically have very acidic bottom soil with pHs of 2 to 4, and remediation, though possible, is a time consuming and difficult procedure. It is best to avoid acid-sulfate areas when selecting a site for aquaculture ponds.

The presence of iron oxides in pond bottom soil is beneficial. Sulfide that is produced in the sediment is precipitated by ferrous iron as iron pyrite. This greatly lessens the likelihood of hydrogen sulfide diffusing into the water and causing toxicity to fish or shrimp. In normal soil, the resulting concentration of iron pyrite will not be high enough to create appreciable acidity when ponds are dried between crops. Normal liming procedures will counter any acidity that is released.

Iron is almost never at a high enough concentration to be directly toxic to shrimp or fish. Moreover, attention to liming waters of low pH and alkalinity and acidic bottom soils will counteract the possible adverse effects of iron. It is not clear whether inclusion of chelated iron in fertilizers for coastal ponds is cost effective. Removal of ferrous iron from water used in for hatcheries and intensive tank culture is a necessary procedure at some facilities.

When water and soil analyses are made, it is exceedingly difficult to interpret the iron concentration. Many soils have an abundance of iron oxides and hydroxides, and the soils are typically extracted with acid and iron analyses made on the extract. The acid will extract much more iron than will dissolve in the water. Therefore, pond managers should not worry much about the iron concentration in soils, but apply adequate liming material to maintain bottom soil pH between 7 and 8.