In this column, I will describe recent feeding trials with a new shrimp feed conducted at the Oceanic Institute between July and September 1999, for a total of 56 days.

L. vannamei (industry line) of an average initial body weight of 1.6 grams were stocked within outdoor tanks (1,500-liter water capacity) at a density of 100 shrimp per tank (50 per square meter or 66.6 per cubic meter), with three tanks per dietary treatment. Zero water exchange was employed for the duration of the experiment.

Water temperatures within uncovered tanks ranged from 25.3 to 34.0 degrees-C. Covered tanks averaged about 1 degree-C warmer than uncovered tanks and reached a high of 35.1 degrees-C. The best overall performance in terms of growth was observed for animals fed the new OI shrimp diet (Fig. 1). Animals more than doubled their body size and growth rate with a higher feed efficiency with in practical outdoor static-water pond culture conditions compared with indoor culture conditions. Moreover, the observed growth rates were 25 to 50 percent higher than normally observed by most commercial shrimp farmers within the U.S. (with weekly growth rates in excess of 2 grams per week). Moreover, growth was such that there is a very real possibility of being able to grow animals to market size in only two months from an initial body weight of 1 gram (currently the average growing period is three to four months).

As with the indoor feeding trial, shrimp growth (expressed in terms of final body weight and weekly growth) was best in those treatments fed eight times daily over a 24-hour feeding period. Animals fed for 24 hours exhibited a final body weight 9.8 percent and 8.9 percent higher than animals fed during the daylight and night hours, respectively. However, these differences were not statistically significant (P < 0.05). Moreover, there was no significant difference (P < 0.05) between the growth of shrimp fed during daylight hours versus night hours; however, feed efficiency and to a lesser extent survival was markedly better in shrimp fed during the night-hours.

Shrimp growth and body weight in those tanks with plastic covers were significantly higher (P < 0.05) than the commercial control, but they were poorest compared to the other AQUAFAN treatments. This is attributed to stressful high water temperatures in plasticcovered tanks, which exceeded temperatures in uncovered tanks.

Despite this, dissolved oxygen concentrations within the covered tanks were generally satisfactory, ranging from 4.5 to 7.1 milligrams per liter. However, the use of plastic-covered tanks during the colder winter months might be beneficial (the current trial having been conducted during the hotter summer months).

All treatments fed the OI shrimp diet had significantly higher (P < 0.05) body weights and growth rates than treatments fed the commercial control diet (30 to 46 percent higher). Both diet series had the same proximate composition (35 percent crude protein, 9 percent lipid) and both contained 2.5 percent squid meal by weight. Shrimp growth on the commercial control diet was similar to that reported by the OI Shrimp Program within its intensive raceway culture systems (i.e., average weekly growth rates of 1.4 grams per week – a respectable growth rate by industry standards). Feed costs per kg of shrimp production, ranged from $1.87 U.S. for the commercial shrimp feed to $1.67 U.S. for the OI diet with nighttime feeding to $1.93 U.S. for the OI diet with day and night feeding (shrimp within this treatment being 46 percent larger by weight than the commercial shrimp feed).

Although the floating feed used was a commercially available catfish feed, shrimp growth, feed efficiency, and survival were poor. Shrimp in the floating feed tanks seemed unaware feed was being administered (the feed eventually sinking), and growth was equivalent to the crumbled (sinking) version of the same diet. There was no significant difference (p < 0.05) between the growth of the commercial feed treatments.

Organic matter was continually resuspended in these zero-water exchange tanks, which resulted in development of a rich microbial floc. At the end of the 56-day experiment, the suspended microbial floc was collected by filtering 8 liters of tank water from each tank and freeze drying the solids. The density of microbial floc in each tank ranged from 31.7 to 340.1 milligrams per liter (mean of 156.5 milligrams per liter). Chemical analyses of this material revealed a valuable food source for the shrimp. The microbial floc had a protein content similar to the OI and commercial pelleted shrimp diet (Table 1). However, the floc was unique in its low lipid levels (mean of 0.61 percent) and high ash levels (mean of 30.21 percent). In a 56-day test designed to evaluate the effect of various feeding regimes on L. vannamei reared in zero-water-exchange outdoor tanks, growth rates averaged over 2 grams per week in the best treatment. All Oceanic Institute diets outperformed commercial controls with equivalent levels of crude protein, fat and squid meal. Day and night feeding outperformed daytime only and nighttime only feeding, but the differences were not statistically significant.

Temperatures within plastic-covered tanks exceeded optimal levels, which may have accounted for poorer growth within covered than uncovered tanks. Floating diets performed poorly, because shrimp seemed unaware of their presence until they eventually sunk to the bottom. Analysis of microbial floc filtered from tanks at the conclusion of the trial indicated a rich source of protein, energy, carotenoids and minerals. 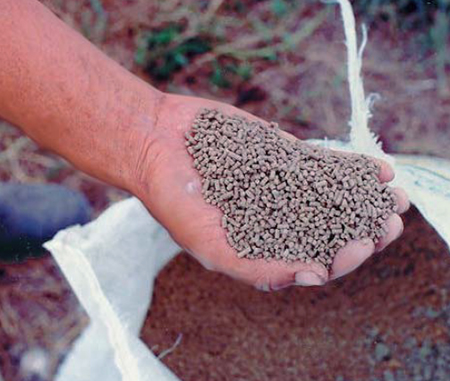 Antinutritional factors within plant feedstuffs is a major factor that limits plant use at high dietary inclusion levels in aquafeeds.