Milkfish (Chanos chanos, locally known as bangus) is one of the most important farmed food fish species in the Philippines due to its wide acceptability to all socioeconomic strata. Milkfish culture is done in ponds, pens and cages in freshwater, brackish water and marine water. In 2012, milkfish production was about 372,580 metric tons (MT), of which cage production contributed 26 percent or about 97,240 MT.

Traditionally, milkfish are cultured in cages of 400- to 3,200-cubic-meter volume at 10-16 kg/m³ and fed sinking pellets or extruded feed using ad libitum feeding management. This results in some uneaten feed that contributes to the nutrient-rich culture environment.

In 2012, the United States Soybean Export Council (USSEC) Soy-In-Aquaculture (SIA) program conducted a demonstration at a milkfish cage farm in southern Philippines that highlighted the use of extruded floating feeds with satiation feeding management and principles of low-volume, high-density (LVHD) cage production methodology. Developed through the efforts of Dr. Michael Cremer with USSEC in China, the technology had the aims of maximizing farmer profits, improving productivity, reducing feed-conversion ratios (FCRs) and limiting environmental degradation.

One of the objectives of the USSEC LVHD technology demonstration was to evaluate the growth performance and economic return of milkfish cultured from fingerling to market stages in cages using USSEC soy-optimized formulated feeds based on prior research through a United Soybean Board project with the Southeast Asian Fisheries Development Center.

Additionally, farmers were trained how to correctly use extruded floating feeds in general in marine cages through the correct application of satiation-feeding techniques and the proper use of feed enclosures in cages to prevent floating feed from exiting the cages. This was accompanied by proper cage positioning for better water exchange in the cages, which is critical for good results in a high-density system.

The fish were fed using a “trickle method” in which small amounts of feed were broadcast by hand into the cages over a long period of time. Feed managers fed the fish three times daily, once in the morning, once at noon and once in the afternoon, taking two to three hours to finish each feeding session.

Table 1. Results of traditional and LVHD cage culture of milkfish.

At the start of the demonstration, the farm manager and staff were hesitant about using extruded floating feed in the cages. Their primary concern was how to prevent the feed from exiting the cages when there were strong water currents.

Past research and demonstration by the USSEC has shown that the best production efficiencies are obtained using a floating extruded feed contained within a fine-mesh net enclosure with four sides and no top or bottom, positioned in the center of the cage during feeding. Feed enclosures are kept at 50 to 70 percent of the surface area of the cage and extend both below and above the water to keep feed within the enclosure. When shown this approach, the farm accepted that floating feeds could be used effectively in marine cages with strong currents.

In addition, the farm staff members were also trained in the USSEC approach to feed management. This “90 percent Satiation Feeding Technique,” developed to help farmers limit wastage of feed, relies on a 10-day cycle in which fish are fed to 100 percent satiation during an active feeding period on the first day, then given the same amount during the same feeding period for the next nine days. The 90 percent satiation reference for the approach is the estimated overall satiation amount that the fish consume during the 10-day period.

The milkfish are fed five times daily at a satiation feeding time of 20 minutes in the early stages, which is brought down to 10 minutes in the later stages. Because the feeds float, fish are not trickle fed, but receive the full ration at one time during each feeding. This approach saves labor time and helps maintain close to maximum growth, but also prevents the fish from establishing dominance hierarchies that can lead to size variations.

Cages 1 and 4 were harvested ahead of the other cages because the milkfish exhibited better growth in the early stages. The FCR of cage 1 could have been lower if its survival rate was higher.

The USSEC LVHD cage culture technology demonstration helped to show that extruded floating feeds can be used to raise milkfish, and the culture of the fish can be achieved at an FCR lower than 2.0. The use of soy-optimized extruded feeds helped to bring down the nutrient loading in the environment, thus limiting environmental pollution. 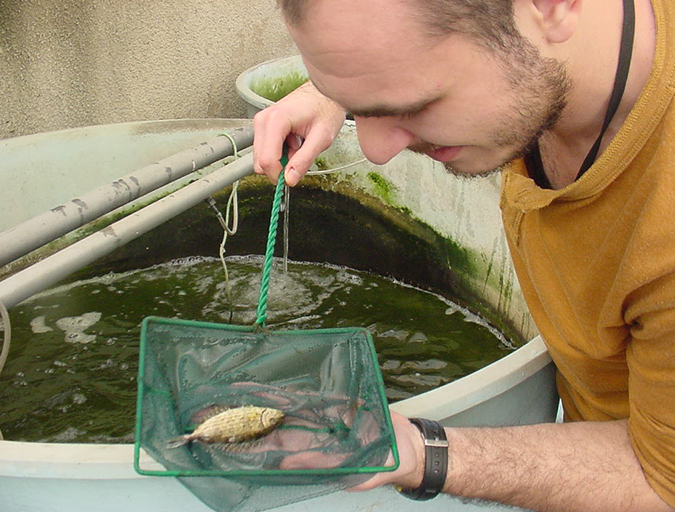 Soybean meal is not a viable option for partial or full fishmeal replacement in a diet for juvenile marbled rabbitfish. Results from a study in Beirut are somewhat surprising, as the herbivorous species is theoretically capable of performing well without animal-sourced protein in feed.