Light penetration is energy source for photosynthesis by phytoplankton

Sunlight consists of the entire spectrum of electromagnetic radiation, which includes gamma, X, ultraviolet, visible, infrared, micro- and radio waves. The major part of solar radiation is in the form of visible and infrared rays that vary in wavelength.

Light penetrating a water surface is scattered and absorbed or quenched as it passes downward. Water scatters but does not absorb ultraviolet light. It absorbs infrared light quickly – little infrared light penetrates more than 2 meters. Light is quenched rather quickly even in clear water. Only about 25 percent of incident light reaches a depth of 10 meters in the open ocean, where water is very clear.

The visible spectrum consists of wavelengths between 390 and 750 nanometers (nm, Table 1). One nanometer is equivalent to 1 billionth of a meter. The rate of visual light attenuation in water is greatest for red and orange rays, less for violet rays and least for yellow, green and blue rays. The presence of dissolved organic matter and suspended solids further impedes light penetration, and different types of solids preferentially absorb at different wavelengths.

Table 1. Categories of light rays and colors in the electromagnetic spectrum of sunlight.

Phytoplankton absorb light best within the red and orange part of the spectrum, but they absorb other colors to a lesser degree. Dissolved organic matter absorbs blue, violet and ultraviolet light most strongly. Suspended mineral matter tends to absorb light uniformly across the visible spectrum, while dissolved inorganic substances do not interfere with light absorption by water. Salinity, therefore, does not have a significant impact on underwater light.

When photons of light are absorbed by water, they warm the water. The amount of heat imparted to the water decreases with increasing depth. Of course, water re-radiates long-wave radiation to the atmosphere, and an equilibrium between incoming and outgoing radiation tends to be achieved, placing limits on water temperature changes over a 24-hour or longer period.

In many water bodies, heat is gained in the upper layer faster than it can be mixed into deeper water by wind-driven water currents. This results in an upper layer of warm water of lower density overlaying a deeper layer of cooler water of greater density. If the difference in density between the two layers becomes so great that surface water cannot be mixed with deeper water by wind action, thermal stratification occurs. In a thermally stratified water body, the upper layer is called the epilimnion, the lower layer is referred to as the hypolimnion, and the layer across which temperature changes rapidly is known as the thermocline.

When the surface layer cools and increases in density, or wind and rain result in stronger mixing, thermal stratification disappears. Depending on the characteristics of water bodies and climate and weather conditions, thermal stratification can develop and collapse on a daily, seasonal or sporadic schedule. Some lakes in tropical climates stratify for very long periods.

Aquaculture ponds usually are shallow, and stratification that develops on warm, calm days does not persist at night, when heat is lost to the overlaying air. Of course, in aerated ponds, aerator-generated water currents keep waters thoroughly mixed. The hypolimnion of a thermally stratified water body often is devoid of dissolved oxygen. Thermal destratification – especially if it is sudden – can cause dissolved oxygen depletion and lead to fish kills. Sudden destratification in lakes containing fish cages is a significant risk.

Light penetration into water also is the energy source for photosynthesis by phytoplankton and other aquatic plants. Plants use red and orange light best, but they also use other parts of the visible spectrum. Wavelengths between 400 and 700 nanometers are called photosynthetically active radiation (PAR), and underwater light meters capable of measuring PAR are available.

Because photosynthesis is a chemical reaction mediated by energy from photons of light captured by chlorophyll and other light-sensitive pigments in plant cells, photons are treated as if they are molecules in measuring PAR.

As a general rule, phytoplankton and other aquatic plants cannot survive at light intensities below 1 percent of light received at the surface – whether measured as total light or PAR. The layer of water receiving 1 percent or more of incident light is known as the photic or euphotic zone. Because light is quenched exponentially with depth, the percentage of incident PAR decreases rapidly (Fig. 1). Incidentally, the depth profile for attenuation of total light would be almost identical to that for PAR.

The underwater light profile illustrated in Fig. 1 is for noon on a clear day in a tropical aquaculture pond with a phytoplankton bloom. Light penetration to different depths was estimated with the Lambert’s law equation. Less than 20 percent of incident light reaches 0.50 m, a little over 2 percent reaches 1.00 meter, and the photic zone is only 1.35 meters thick – a fairly typical situation in an aquaculture pond.

In ponds with aeration, induced water circulation continually brings phytoplankton from deeper water into the photic zone and vice versa. This phenomenon has basically the same effect as increasing the thickness of the photic zone – it increases the amount of photosynthesis per unit surface area in a water body.

In lakes, the depth of the photic zone typically corresponds to the depth at which thermal stratification occurs. There is no photosynthesis in the hypolimnion to provide dissolved oxygen. Lakes in which hypolimnetic dissolved oxygen depletion occurs are classified as eutrophic – meaning rich in nutrients – as opposed to oligotrophic lakes that are nutrient-poor.

Using this method for obtaining K and solving the Lambert’s law equation for depth of 1 percent light penetration suggests that the thickness of the photic zone is about 2.7 times the Secchi disk visibility. The depth of the photic zone has been variously reported as two to three times the Secchi disk visibility based on studies of plant growth, but the value of 2.7 is a good one for general purposes.

Turbidity created by phytoplankton growth in ponds often is a means to avoid growth of underwater macrophytes. At a typical Secchi disk visibility of 40 to 50 cm in aquaculture ponds, a minimum depth of 110 cm is necessary to avoid enough illumination at the bottom for plant growth. 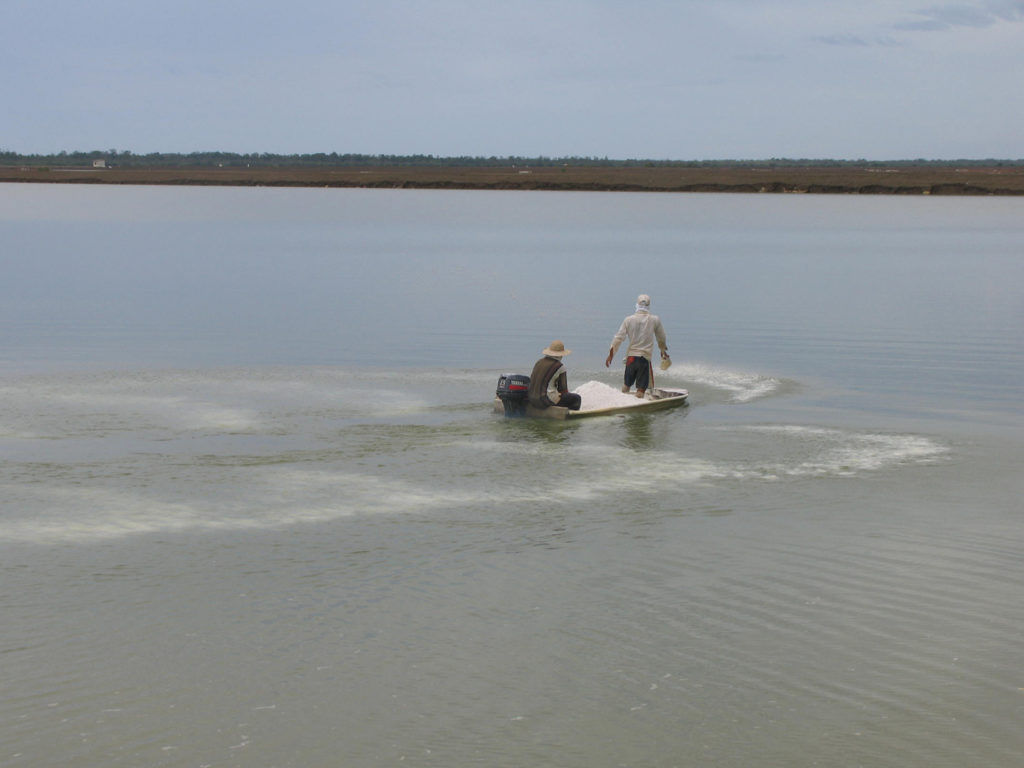 Agricultural limestone is widely used to improve pH and alkalinity in aquaculture ponds. There is considerable use of lime in aquaculture to disinfect pond bottoms and water, to attempt to control pH, and various other reasons.