A feed with optimal nutrition is of little value if it has low palatability (not consumed), low particle stability (disintegrates in water causing water quality degradation), low nutrient stability (nutrients leach into the water before consumption), or low nutrient availability (larvae can not absorb the nutrients). These four performance criteria can sometimes conflict, but a balance can be achieved. It is this balance that is important when evaluating larval feed production methods. The three primary classes of larval feeds are microencapsulated, microbound and complex particles. Microencapsulated feeds have a shell or microcapsule around the ingredients.

Microbound feeds are held together with binders from within the matrix of ingredients. Complex particles are manufactured by combining two or more types of particles in an effort to exploit the strengths of each type. For example, water soluble nutrients in a lipid-walled microcapsule can be embedded into a microbound carrier particle.

Microbound feeds are further divided into two general groups: crumbles and on-size particles. Microbound crumbles are produced by first forming a flake or a cake, crumbling, and then sifting to the appropriate size range. On-size feeds are produced in the desired particle size so that crumbling is not necessary. This eliminates the production of under or oversized particles, which constitutes waste in crumbled feed production. Another advantage of on-size, microbound feeds, such is increased particle stability.

One method of manufacturing onsize microbound feeds is Micro-extrusion Marumerization (MEM), which is a two-step process. The first step involves extrusion of the ingredient mix through a die or screen with very small holes, with either a cold extruder or a cooking extruder (Fig. 1).

The second step breaks the long noodles produced in the extruder to lengths roughly equivalent to their diameter. This step uses a machine known as a Marumerizer™ or Sphere-izer™ (Fig. 2.). It is a cylindrical device with a grooved, bottom plate that rotates at high speeds. The rotation of the bottom plate transfers energy from the motor to the feed particles, spinning and twisting them into round or oblong shapes as shown in Fig. 3.

With the MEM process, particle size is limited by the type of extruder. Most cooking extruders are limited to 500 to 1,000 micron particles as the smallest size. Even though this is too large for a first feed for many larval species, it is an extremely small size for an extruder. The twin-dome extruder is a cold-extruder (limited shear and no added heat) and can produce particles down to 300 um in diameter. It is very difficult to cut particles of this small size to length, as is done with feeds greater than 1,000 um, so a Marumerizer™ or Sphere-izer™ is used in the MEM process.

Very high yields of on-size particles, often as high as 95 percent and sometimes as high as 99 percent, are produced with the MEM process. Traditional crumbled feeds can often yield less than 40 percent of a specific size. MEM has been used by the pharmaceutical and agricultural chemical industries for many years. It has only been used with aquaculture feeds for the last 10 years, and mostly on an experimental basis. It is a true bulk-powder handling method capable of very high production rates.

The particle size produced by MEM is limited to the smallest diameter capable by the extruders. Efforts to make particle size smaller than those that were extruded have generally been unsuccessful. Yields of particles less than 400 um (using a 500 um die and cold extrusion) could only be increased to 9 percent, and final particle quality was compromised.

The Particle-Assisted Rotational Agglomeration (PARA) method was developed to produce shaped feed particles less than 400 um in diameter. This process uses a marumerizer but not an extruder. Particle size is then limited only by the size of the ingredients. Instead of placing the conditioned (i.e. wet or heated) ingredient mix in the extruder, the mix is placed directly into the Marumerizer™ or Sphere-izer™.

A charge of inert beads is then added. As the Marumerizer™ or Sphere-izer™ spins, the inert beads roll and exert pressure on the mix forming spherical particles. These beads are often 10 times the diameter of the target feed particle so that removal of the beads from the feed particles is easily achieved. There are many operating parameters that can be manipulated to change particle size and density. These include bead density, bead loading rate, rotational speed, and moisture content. A range of particles is produced so sifting is necessary, but no crumbling is required. This process was developed specifically for aquaculture feeds, but has not been used commercially. Relative to some larval feed production methods, large scale production of PARA particles should not be difficult.

The PARA process is a low pressure agglomeration method, compared to MEM, which is a high pressure process. PARA particles therefore have a little lower particle stability and a slower sinking rate than MEM particles. The MEM particles will sink faster than PARA particle of the same formulation, which is a negative effect with some species and of no importance in others. MEM particles are generally exposed to more heat during processing than PARA particles, but the barrels of some extruders can be chilled to decrease heat production from shear. High heat levels may decrease nutrient digestibility for some larval species. Marumerizers™ are equipped with a jacket that can be either chilled or heated dependant on the application, adding increased flexibility to the process.

Both MEM and PARA particles have very smooth surfaces relative to crumbled feeds. The smooth surface is the result of processing by the Marumerizer ™ or Sphere-izer™. This smoother shape may contribute to increased palatability and particle stability. Survival of larval fish during weaning from live foods to formulated feeds was higher when feeding a MEM feed compared to feeding a crumbled steam pellet, using the same formulation for both feed types. Whether the increased survival was due to increased palatability, reduced leaching, or improved water quality is unknown.

Particle stability of both MEM and PARA particles will be dependant on binding system chosen, and the specific processing parameters used in production of the feed. In general, however, both of these methods can result in feeds with very high, 24 hour, particle stability. This provides greater safety to the farmer with regards to overfeeding. Excess feed on the bottom of the larval tank will not disintegrate and pollute the water as quickly as other feed types.

The cost of producing larval feeds is many times higher than grower feeds, and larval feed manufacturing methods range from the very complex to the relatively simple. The complex methods are of course costly, low volume methods. The on-size, microbound feeds are on the lower cost end of the production spectrum, and can be easily scaled-up to handle very large volumes.

Since both MEM and PARA feeds are microbound, water soluble nutrients should leach more than in most microencapsulated feeds. In many species, some nutrient or flavor leaching is necessary for good feed consumption to occur. Leaching becomes a greater problem as particle size is reduced since the surface area to volume ration is increasing.

These microbound feeds may not be appropriate for particles less than 200 um without protection of the essential water soluble nutrients (i.e. vitamins). The development of complex particles in this very small size range might allow for both high palatability and nutrient stability.

There are currently many new, exciting developments in larval feed production at both the laboratory and production levels. Both MEM and PARA particles are well consumed by many species, have high water stability, and can be economically produced.

It is important for both the feed producer and farmers to carefully analyze larval feeding needs, and match those needs with feeds having the appropriate characteristics. Optimizing larval feed type, feeding systems and rearing systems will result in greater numbers of healthy juveniles available for grow-out. 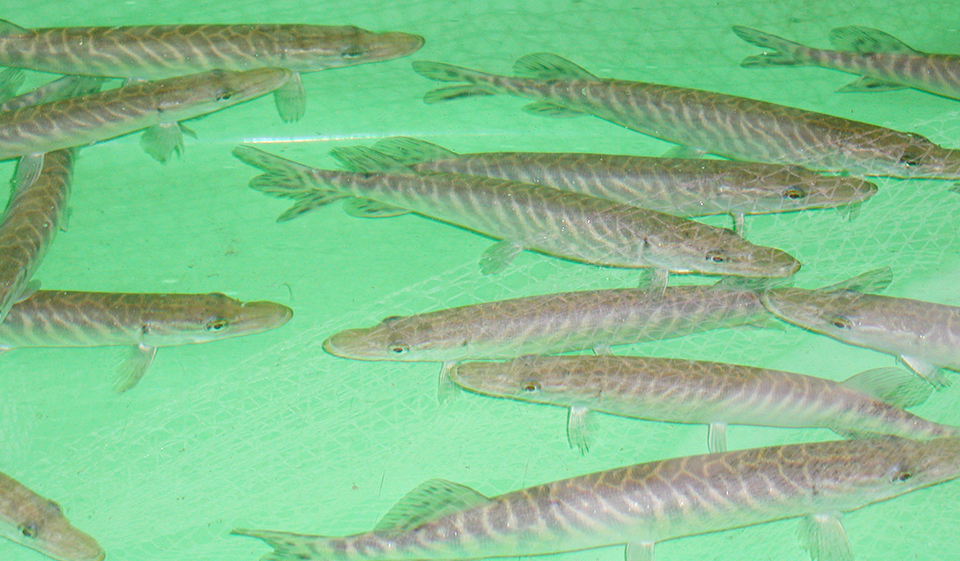 A replacement diet formulated specifically for northern pike larvae was not available in Europe, with the brine shrimp artemia most often used as live food. 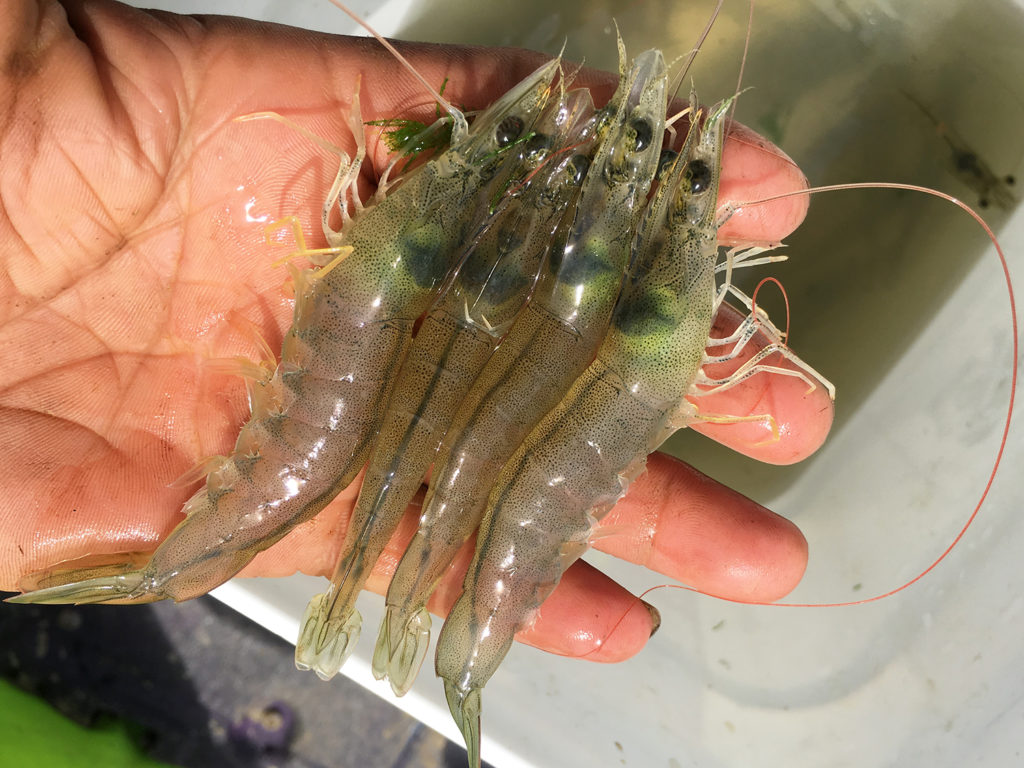 This article presents lab and field test results for a proprietary parabiotic on Pacific white shrimp farms in Latin America and Southeast Asia.