Natural hybridization in the marine environment is an important mechanism for the production of biodiversity. Mass-spawning marine invertebrates, in particular, have the potential for hybridization when gametes mix in the water column. “Gene shuffling” associated with hybridization can result in a mosaic of phenotypic characteristics expressed in the first and subsequent backcrossed generations that can mediate a variety of ecological interactions.

Of particular importance to pharmaceutical aquaculture is the potential novelty of hybrid defensive chemistry due to the obstruction of biosynthetic pathways and/or gene regulation resulting in the build-up of transient chemical substrates. Elaboration of biosynthetic pathways can lead to the combination of novel chemical compounds that bear the basic skeleton from one parent with a structural side chain and/or basic skeleton of a second parent.

Thus, hybridization is a unique source of molecular and chemical diversity that might be tapped as a “pharmaceutical factory” for the production of new marine natural products.

The soft corals Sinularia maxima and S. polydactyla are common members of the shallow-reef fauna of the tropical Indo-Pacific and the most abundant species of soft corals in Guam. These two species contain numerous terpenoid compounds that serve a variety of ecological roles and have the potential for important antimicrobial pharmaceutical activities.

Both soft corals have separate sexes. S. polydactyla undergo an annual mass spawning event on the fourth, fifth, or sixth nights after the full moon of April, May, and June. S. maxima spawn the fourth or fifth nights after the full moon in June. Thus, these soft corals have the opportunity to cross-fertilize in nature to form a natural hybrid, Sinularia maxima x polydactyla. Taxonomic and biochemical evidence from field samples suggests this has occurred.

With funding support from Mississippi/Alabama Sea Grant, the National Science Foundation, and National Institute of Undersea Science and Technology of NOAA’s Undersea Research Program, the authors conducted laboratory experiments in May 2002 using eggs and sperm stripped from Sinularia maxima and S. polydactyla to verify the coral hybridization. Sperm dilution assays were conducted prior to the experiment. Counts of formalin-fixed sperm using a hemacytometer indicated that a density of 106-107 sperm per ml provided an optimal egg fertilization density for the soft corals.

For the experiment, concentrated sperm was added to five replicate vials containing 250 eggs to achieve a final sperm density of 106 sperm per ml. After a two-hour incubation period in a flow-through sea water bath, the eggs were concentrated in a counting chamber, and the percentage of eggs with a fertilization envelope was determined by microscopic evaluation. Eggs incubated in sea water without sperm were included in the experimental design as controls.

As shown in Table 1, results indicated that cross-fertilization hybridization can occur in about 40 percent of the encounters between the two species’ gametes. The data suggested that hybridization proceeds in a unidirectional manner, but the results are equivocal, as experimental constraints such as the use of immature S. maxima eggs confounded the data interpretation. Hybrid soft coral larvae were reared in the laboratory through planulation at 72 hours and settlement at one week. The settled polyps developed normally and grew at a rate comparable to polyps of both parent species.

The authors extracted hybrid Sinularia maxima x polydactyla samples from field sites in Guam and compared the chemistry to that of the parent species. Sinularia maxima and S. polydactyla commonly produce the compounds cembranoid diterpenes, pukalide, 11β-acetoxypuklide, and 5 episinuleptolide. However, the hybrid produced five novel cembranoid diterpenes and a new structural class formed as a chimera between the cembranoid skeleton and the ses-quiterpene skeleton of the parent species that the authors named polymaxenolide.

The hybrid compounds are all currently under investigation for potential pharmaceutical roles at the National Center for Natural Products Research in Oxford, Miss., USA. Test results indicate that, in contrast to previous studies of hybrid plants, hybridization in the soft corals results in an exceptionally high percentage of novel chemistry that may yield novel compounds with pharmaceutical potential. Thus, hybrid gene shuffling in marine systems may represent a unique mechanism to develop new “phamaceutical factories” via aquaculture practices. 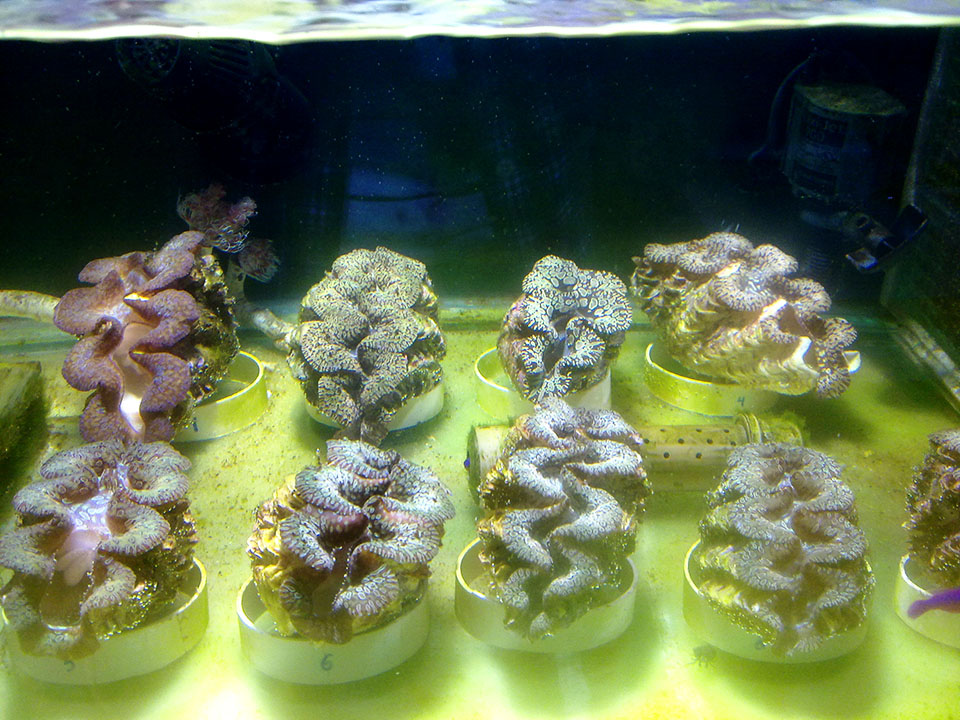 Giant clams are a resource utilized by the food and aquarium trade markets. However, aquaculture production is low and does not supply the demand. Ready availability of broodstock and seed is a major problem, as well as practical and consistent methods for inducing spawning.