The aquaculture industry is increasingly relying on vegetable oils in feed formulations since fish oil is becoming more expensive and in shorter supply. Vegetable oil is a cheaper lipid source that generally has little impact on the productivity of various fish species and also reduces dietary and fish tissue lipid peroxidation.

The latter is due to the fact that some vegetable oils contain relatively high amounts of natural vitamin E, a powerful antioxidant, as well as high saturated fatty acid (SFA) and monounsaturated fatty acid (MUFA) contents. These fatty acids are resistant to oxidation, which can translate to longer shelf life or storage duration.

On the other hand, fish oil alternatives are generally deficient in the health-promoting long-chain polyunsaturated fatty acids (LC-PUFAs), such as eicosapentaenoic acid (EPA, 20:5n3) and docosahexanoic acid (DHA, 22:6n3).

Although tilapia have some ability to bioconvert α-linolenic acid (ALA, 18:3n3) and linoleic acid (L.A., 18:2n6) to LC-PUFAs, the fatty acid composition of tilapia will generally mirror that of their diets. This characteristic can be exploited by utilizing a finishing diet, often containing the more expensive marine-based oils, to tailor the fatty acid composition of tilapia and thus improve their nutritive properties prior to harvest.

Accordingly, farmed tilapia can be fed vegetable oil-based diets throughout most of their growout culture and switched to a fish oil finishing diet just prior to harvesting. However, the efficacy of such a strategy can be dependent on the duration of providing these diets as well as prior feeding history, which can be highly species-specific.

The F.O. diet was highest in LC-PUFAs, followed by the F.O. + CPO diet. The L.O. + CPO diet and SBO diet contained high amounts of ALA and L.A., respectively, while the CPO diet contained a high MUFA and SFA content. Danish fishmeal and soybean meal were used as protein sources at a 2:3 ratio.

After five months on these diets, tilapia were switched to a fish oil-based finishing diet, and the fatty acid composition and lipid oxidative stability were measured each month for three months.

The growth performance and feeding efficiencies were slightly better for tilapia fed the fish oil-based diets after five months, although no significant differences were detected. Moreover, survival, carcass/fillet yield and various body indices were similar among all dietary treatments. As expected, the fatty acid compositions of the tilapia fillets were similar to those of the diets.

Lipid oxidative stability was substantially greater in tilapia fed the vegetable oil-based diets, particularly the SBO and CPO diets. These diets also led to the highest deposition of SFA and MUFA content, respectively, as well as vitamin E. While oxidative stability gradually decreased over three months when tilapia were switched to a fish oil finishing diet, this was still significantly higher for those previously fed the SBO or CPO diet.

Over three months of tilapia fed the finishing diet, the fillet lipid ALA and L.A. content rapidly decreased (Figs. 1A, 1B), but still remained high for tilapia previously fed the L.O. + CPO or SBO diet, respectively. The omega-3 LC-PUFA fatty acids, including EPA and DHA, rapidly increased (Figs. 2A, 2B). Although the EPA content was still significantly lower after three months than for tilapia fed the F.O. diet throughout, DHA content was similar among all dietary treatments after three months on the finishing diet.

Despite the markedly different fatty acid compositions of the tested diets, tilapia productivity was not significantly affected by the various dietary lipid sources over the course of five months from stocking to near marketable size. This indicated that a reduced reliance on marine-based oils can substantially lower feeding costs during tilapia grow-out.

Due to the higher deposition of vitamin E and lower LC-PUFA content, fillet lipid oxidative stability was greater for tilapia fed the vegetable-oil based diets. However, in terms of the fatty acid composition, this can be less healthy for human consumers due to the decrease in the beneficial omega-3 fatty acids in tilapia fillets.

The use of a fish oil-based finishing diet was shown to be effective in boosting beneficial fatty acids in tilapia, since there was a significant increase in the LC-PUFA content of their fillets, regardless of prior feeding history. However, tilapia previously fed the CPO + F.O. diet had the highest LC-PUFA content after three months, likely due in part to the higher LC-PUFA content in this diet.

Although the tested dietary vegetable oils had little to no effect on tilapia productivity, the substantially lower LC-PUFA content and n-3:n-6 ratios may give tilapia a poor public image in terms of human health. The use of a fish oil-based finishing diet can be an effective strategy to prevent this from occurring.

When switched to the finishing diet, it was shown that prior feeding history had little impact on LC-PUFA deposition, although the n-3:n-6 ratios of the final product were substantially different – ranging from 2.76 to 1.08 for tilapia previously fed the CPO + F.O. diet and the SBO diet, respectively.

Since researchers and nutritionists often use LC-PUFA content but also n-3:n-6 fatty acid ratios in assessing the nutritive values of food, prior feeding history should be taken into account. On the other hand, although the LC-PUFA and n-3:n-6 ratios were still significantly lower than for tilapia fed the fish oil diet throughout, these values were similar to examples of wild tilapia.

As such, since it is inevitable that fish oil in tilapia diets will be used in lower amounts, to maintain tilapia as a healthy product for human consumption, the use of finishing diets can be an effective strategy. Indeed, the use of dietary vegetable oils during the grow-out of tilapia followed by feeding finishing diets can offer a good balance for cost effectiveness, fillet oxidative stability and beneficial fatty acids for human consumers.

Editor’s note: For the full report of this study, refer to the authors’ article titled “Effects of dietary fish and vegetable oils on the growth, tissue fatty acid composition, oxidative stability and vitamin E content of red hybrid tilapia and efficacy of using fish oil finishing diets” in the January 2013 Aquaculture journal. 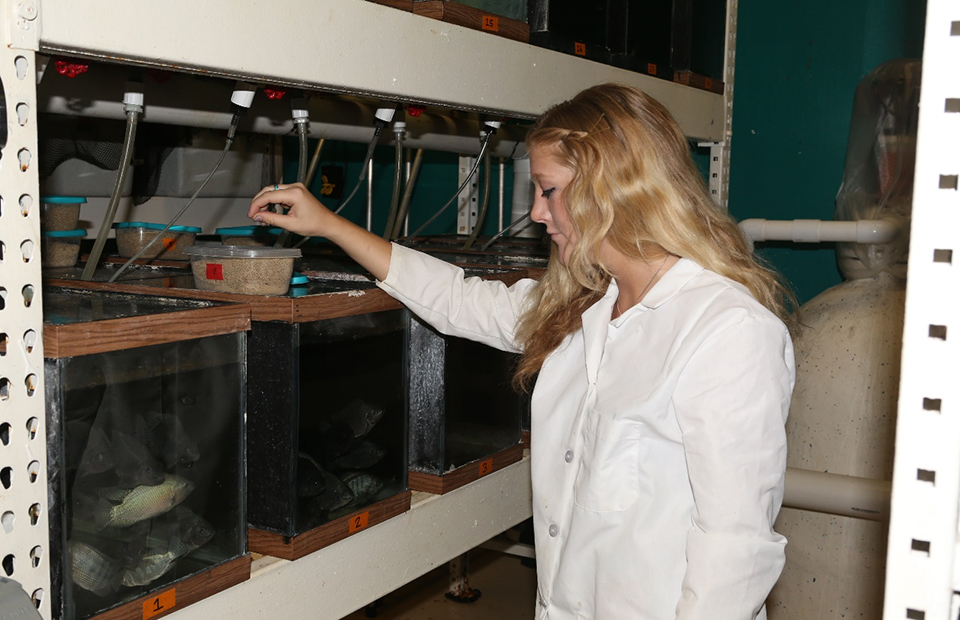