Aquatic feed formulas are a complex mixture of ingredients designed to fulfill the nutritional requirements of a target species. Not only does each ingredient in the formula play an important role in the amount of nutrients it supplies, but each also interacts with others during the process to produce the final product. Depending on the processing conditions and the ingredients used, different products such as floating or sinking extruded feeds can be produced.

A schematic view of a single screw extruder with its different zones is shown in Fig. 1. The first section is the feed zone where the formula mix is added to the extruder. This zone is characterized by having deep channel screws that are designed to convey.

The next zone is the compression zone, which has shorter pitch, flighted screws and shallower channel depth. The objective is to start applying mechanical energy to the mix, thus initiating the cooking process. In this zone the material starts melting.

In the final zone, the molten materials become a plastic-like, amorphous melt, and here is where the highest pressures and temperatures are achieved. The screw elements have even shallower channels and pump out the molten phase through the die. Upon exiting the die, the melt is suddenly exposed to the atmospheric pressure, causing a drop in pressure that changes the superheated water into vapor, and resulting in what is known as expansion (Fig. 2).

A typical shrimp formula contains the following category of ingredients: protein sources (fishmeal, soy bean meal, other marine byproduct meals); starch sources (wheat flour and rice flour); water; fats and oils (fish oil); fiber (as part of some ingredients); and minor ingredients like vitamins and minerals. Each group of ingredients influences the final product and processing conditions. As ingredient formulation is changed, one must be aware that processing conditions in the extruder will also have to change. And in some cases, a different screw configuration is required to accommodate for drastic formula changes.

During the extrusion process, proteins will form a disperse phase within the starch matrix. Under the effect of high shear and temperature, some proteins – in particular the water-soluble ones like albumins – will denature and coagulate. However, due to the shearing action of the screws, the protein is macerated into very small pieces.

Proteins from oil seeds – like soybean meal and wheat (gluten) – form viscoelastic doughs as they are hydrated with water, but as shear increases by the action of the screws and other particles rubbing against each other, the proteins are also macerated into smaller particles. Fig. 3 shows a protein melt phase in the fluid state surrounding starch granules that have not ruptured. In contrast, proteins from muscle origin (fishmeal, poultry meal, etc.) are more resistant to the shearing forces than the oilseed proteins, and can retain the particle size they originally had when entering the extruder.

In the extrusion process, the globular proteins (soy bean meal, wheat gluten, etc.) when processed in the presence of high moisture (> 35 percent), temperatures exceeding 140 degrees-C, pressure and high shear can be dispersed to form a continuous melt. In this fluid state, the protein flows like a liquid, but if subjected to lower temperatures the flow becomes laminar and cross-linking occurs.

If the protein matrix is allowed to flow continuously at low temperatures, it will form stream lines (cross-bonding). Once it exits the die, the water will evaporate leaving small voids within the cross-linked structure. Therefore, depending on the type of protein and the process conditions (water, screw speed, screw configuration), one can control the type of structural integrity of the feed. This is of particular importance if the objective is to change protein attributes like solubility and overall physical integrity.

Proteins are denatured in the extruder, and this is believed to improve their digestibility by exposing the molecules to more enzyme-access sites. The protein denaturation is usually measured based on the protein solubility in water or aqueous solutions. Lower solubility is indicative of high shear process at which more protein is denatured. However, some proteins may not require high shear to be denatured or have low solubility. An example of this is wheat protein (gluten), which can be denatured at low screw speeds.

Similar to excess water, oils and fats act as lubricants between the particles and the screws of the extruder. Oil reduces the friction between the particles in the mix, and between the screw surfaces and the liner of the barrels. If oil (i.e. fish oil) is added at levels greater than 2 percent of the total mix, it will cause the starch granules to melt but they will not disperse. This results in lower temperature of the molten phase in the last section of the extruder, but with little or no expansion as it exits the die.

In some aquatic feed formulas with high protein content and with intrinsic oil levels over 2 percent, products with very little expansion can result. This can be a problem if the product specification for the target species requires it to be a floating feed. In most cases, high protein diets require a minimum of 8 percent starch to ensure adequate bulk density (< 550 grams per liter). So, if oil is to be added to the product to meet the energy requirements, this must be done after the extrusion process via a coating unit. In high fat formulas, the screw configuration can be changed to a more aggressive or higher energy profile to increase the mechanical energy input and ensure extrudate floatability.

Oil can be added in the extruder to control product density. Therefore, by manipulating oil addition one can produce sinking or slowly sinking feeds. However, if oil is added to manipulate the density of the product, it should be done according to the target energy requirement of the species. Oil added in excess to control bulk density can have drastic effects on feed consumption and/or utilization by the target species.

A concern with lipids addition in the extruder is their oxidation, which may affect the vitamin stability and other organoleptic attributes of the feed.  There is no evidence that lipid oxidation occurs in the extruder; however, pro-oxidant materials that are released into the mix as a result of screw wear can produce oxidation. Also, it is possible that the air cells formed during the expansion contribute to oxidation process.

Starches are a source of energy in aquatic feeds, but also play an important role as natural binders and density control agents. Starches are found in cereal grains, potatoes and cassava. Starch is physically present in cereals in small aggregates of polymer molecules known as granules. There are two physical forms of starch, amylose and amylopectin.  Amylose is a linear polymer of glucose units with one or two branches. Amylopectin, a much larger molecule than amylose, is a branched polymer of glucose units.

In the extrusion process and in the presence of water, the starch granules first hydrate and swell. In the compression zone the starch swells even more and the protein starts to form a molten phase. As more energy is imparted, the granules soften and eventually rupture to form a continuous melt fluid. If more shear is applied, the starch molecules are macerated even further into smaller chains of glucose units. This is known as dextrinization. Highly dextrinized starch will tend to absorb water more readily and this can be a problem for water stability. Therefore, if a feed is made under high shear conditions one can expect the pellets (sinking or floating) to hydrate fast and have poor water stability (Fig. 4).

Starch also plays an important role in floating feeds, because of the continuous phase and expansion achieved with starch that is possible when making floating feeds. In high protein formulas, at least 10 percent starch is required to achieve feed buoyancy. Starch also helps maintain the integrity of the extrudate as it leaves the die, by forming a continuous phase with the protein.

Fiber in aquafeeds is found in most cereal grains, and some formulations may include bran. Like starch, fiber is also a polymer of glucose units but with a different linkage between the molecules. This different link (β 1-4 vs. α 1-6 for starch) is what makes fiber indigestible to most species except bacteria which produce the enzyme β amylase. Fiber does not affect the mechanical energy input in the extruder, but it does not expand very well. The bran particles have little effect at low concentration (1 to 2 percent), but as the levels increase to over 6 percent, this may reduce expansion. Therefore, formulas with high fiber content may produce extruded feeds with poor expansion, low floatability and poor water stability.

Minerals are not changed during the extrusion process, but some minerals may contribute to increase the bubble formation (nucleating sites) in the disperse melt fluid phase. The smaller bubbles increase the surface area and can be an advantage when coating the feeds with oil. Porous surfaces on the pellets are preferred in the newer vacuum type of coating systems, to achieve better oil penetration and reduce the oil migration from the feed to the packaging material.

At high moisture levels the product exhibits elastic recoil as it leaves the die. This is because the extruded material is still pliable and flexible to bounce bank until it reaches the glass transition temperature (Tg). At lower moisture levels the extruded material sets or becomes glassy very quickly, resulting in larger cells. The expansion resulting at low and high water levels are shown in Fig. 5. Products made with excess water addition (> 30 percent) will tend to have higher density and overall smaller dimensions (expansion coefficients) than products made with low water addition.

Aquafeed formulas should be designed to perform under an optimum set of processing parameters, to achieve the desired product attributes while maximizing its nutritional value and extruder output. Subtle changes made to the formula may require re-adjusting processing parameters or fine tuning the process. However, major changes made in the formulation may require re-optimization of the process, which may even include changing screw profile. It is important to be aware that not all feed formulations can be made with the same screw configuration or the same set of processing conditions. 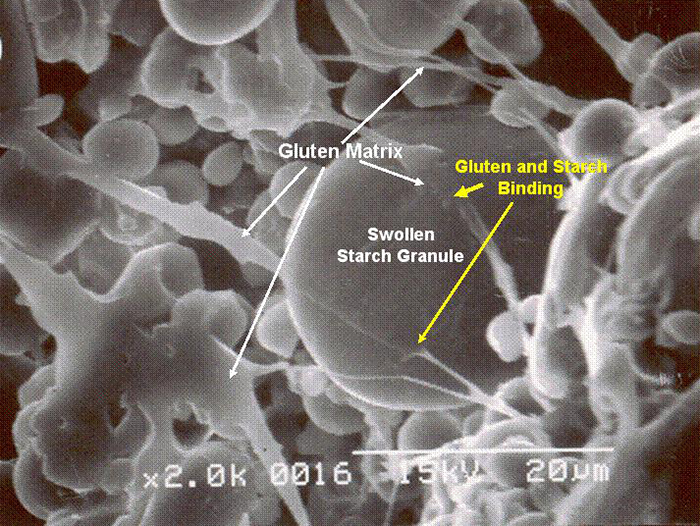