Tilapias are the second-most cultured species in the world after the common carp (Cyprinus carpio) and could become the top fish species cultured worldwide in a few decades. Tilapias are hardy, reproduce readily, have omnivorous feeding habits, rapid growth and excellent meat quality. The giant freshwater prawn is an established aquaculture species produced in many countries; it is very adaptable, has rapid growth and disease resistance and is adaptable to polyculture with fish species.

Biofloc technology systems (BFT) support intensive aquaculture production with no or minimum water renewal. Bioflocs have high nutritional characteristics with a protein content of 28 to 40 percent and an adequate balance of amino acids, fatty acids, minerals and vitamins. Bioflocs are a complementary feed source for Nile tilapia (Oreochromis niloticus) and giant freshwater prawn (Macrobrachium rosenbergii). Tilapia, by consuming and assimilating biofloc protein, can meet up to 25 percent of its nutritional requirements, thus reducing the protein levels needed in its aquafeeds.

The technology of recirculation aquaculture systems (RAS) is based on water recycling using mechanical and biological filters, supporting high-density production of various aquaculture species. Results of RAS production of tilapia or giant freshwater prawns are positive, but capital and operating costs can be high. Generally, tilapia culture in BFT systems is reportedly more cost-effective than in RAS systems.

Polyculture is a production system with two or more aquatic species in the same body of water. The technique helps improve production efficiency and profits. Culturing fishes and prawns can improve the ecological balance of ponds by helping prevent massive algal blooms, lessening potential environmental impacts. Rearing Nile tilapia and giant freshwater prawn in polyculture can be very efficient, as these animals occupy distinct ecological niches and consume natural feedstuffs.

The experiment was conducted at the Laboratório de Ecossistemas Aquáticos, Embrapa Meio Ambiente, Jaguariúna, SP, Brazil. Experimental, 150-liter tanks were set up in an independent recirculation system with supplementary aeration, constant water temperature at 26.0 degrees-C, and a photoperiod of 12 hours of light and 12 hours of dark. To accelerate biofloc development in the tanks, water from another BFT system was used to inoculate the experimental tanks 10 days prior to the start of the experiment.

All male Nile tilapia (n = 128; 7.29 ± 0.67 grams) were individually weighed and randomly distributed in 16 experimental tanks at eight fish per tank. Giant freshwater prawns (n = 96; 0.50 ± 0.09 grams) were distributed among eight experimental tanks at 12 animals per tank in a polyculture treatment. The experimental design was completely randomized in a factorial design 2 × 2 (BFT and RAS vs. monoculture and polyculture) with four replications per treatment.

Experimental diets were formulated to contain 28 percent of digestible protein (DP) and 3100 kcal/kg of digestible energy (DE). During the experimental period, the animals were fed three times a day until apparent satiety over a period of 30 days. At the end of the growth trial, fish and prawns were fasted for 24 hours before being individually measured and assessed. Sugar cane molasses were added during the trial as a source of carbon at a carbon-nitrogen ratio of 12:1 when required.

For detailed information on the experimental system, diets and growth trial; water quality monitoring; and statistical analyses, refer to the original publication.

Results of the study showed that water quality variables were within the normal ranges for tilapia and freshwater prawn throughout the study and that there was a significant effect of the system and the culture system on weight gain, apparent feed conversion and protein efficiency ratio.

Tilapia reared in monoculture and polyculture BFT conditions showed superior responses to weight gain and apparent feed conversion, AFC [dry feed offered (grams) / biomass gain (grams)] in comparison to the RAS. We observed an improvement in weight gain of 27.07 percent for monoculture and 50.95 percent for polyculture for tilapia in the BFT conditions, when compared to the RAS conditions. These results are similar or better than those reported by various other researchers of 21 to 22 percent improvement in weight gain of tilapia in the BFT system compared to RAS conditions.

But the biofloc positively influenced the weight gain of tilapia when compared to RAS (where the animals fed exclusively on the experimental diet), supporting the nutritional value of biofloc for both species. Other researchers have previously reported that, for tilapia, biofloc can contribute about 25 percent of the protein requirements of the fish.

The protein efficiency ratio, PER [weight gain divided by intake of a particular food protein during the test period] is influenced by the quantity and quality of the protein in the diets. The nutritional quality of biofloc is reflected by the great varieties of its microorganisms – such as phytoplankton, bacteria, rotifers, copepods and protozoa – that provide high protein content and adequate balance between amino acids, fatty acids, minerals and vitamins. The best PER for tilapia in the BFT conditions in our study benefitted from the biofloc nutritional contribution.

Prawns reared under BFT conditions showed weight gains 65.4 percent higher compared to prawns in RAS conditions. Other authors working with a related prawn species, M. amazonicum, reported no influence on the growth of Nile tilapia in polyculture in a RAS system. However, in our trial, polyculture with tilapia and giant freshwater prawn improved the growth of both species in both experimental conditions, BFT and RAS.

Similar to the results observed for tilapia, the improved weight gain of prawns in the BFT system was associated with biofloc consumption as supplementary feed. Some researchers have reported that microbial flocs can reduce aquafeed costs by up to 20 percent for several species. And according to other researchers, the bacterial communities that make up the biofloc may support improved disease resistance and survival, reflected in the higher survival (87 percent) of the prawns in the BFT compared to 79 percent in the BFT setting.

In our study, Nile tilapia generally performed better in the BFT conditions than in RAS conditions, both in monoculture and in polyculture with giant freshwater prawns; and the prawns showed improved growth and survival under BFT conditions.

Polyculture of these species in BFT systems has much potential, because the biofloc can improve the growth of both species – both of which are capable of capturing and assimilating the biofloc particles in suspension – and reduce their feeding costs. Polyculture of Nile tilapia and giant freshwater prawn in BFT should be considered as a potential, eco-friendly aquaculture model. 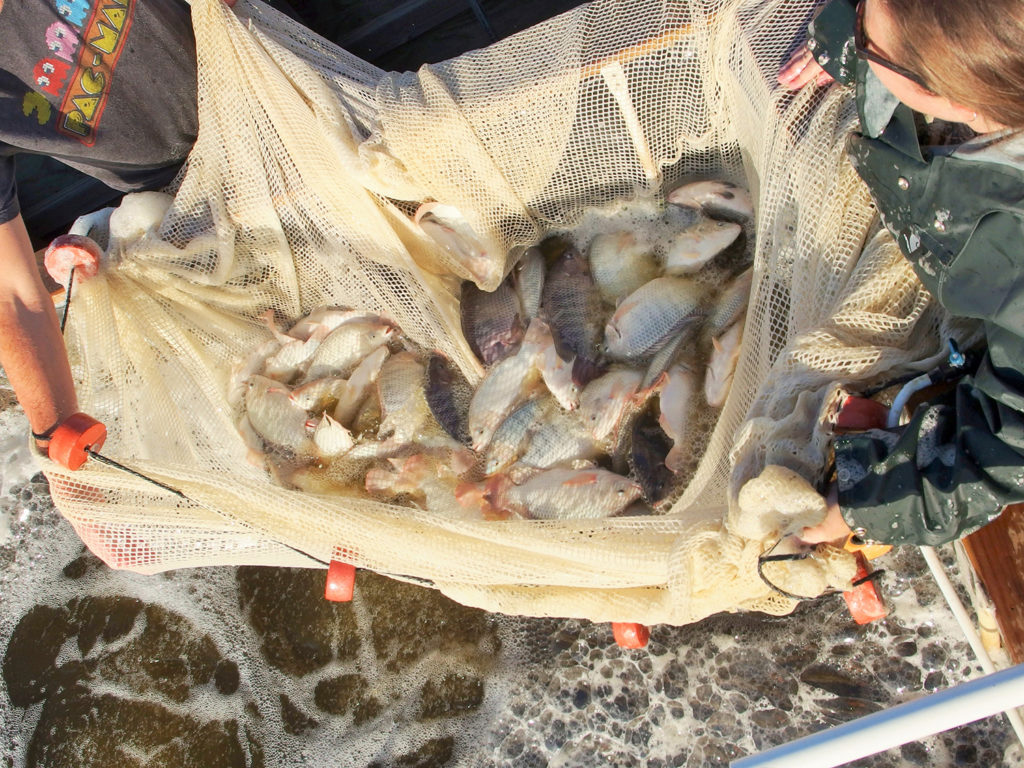 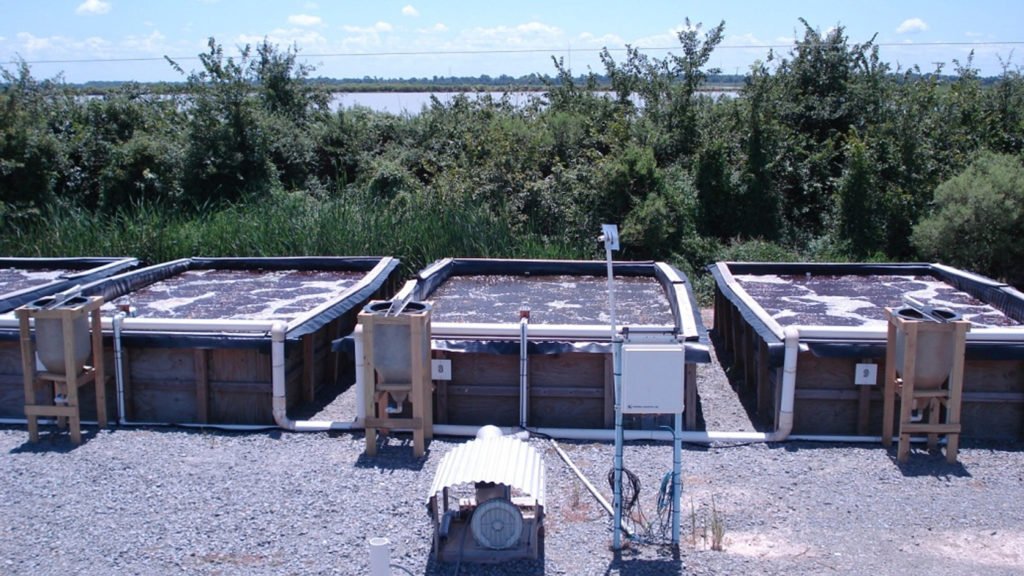 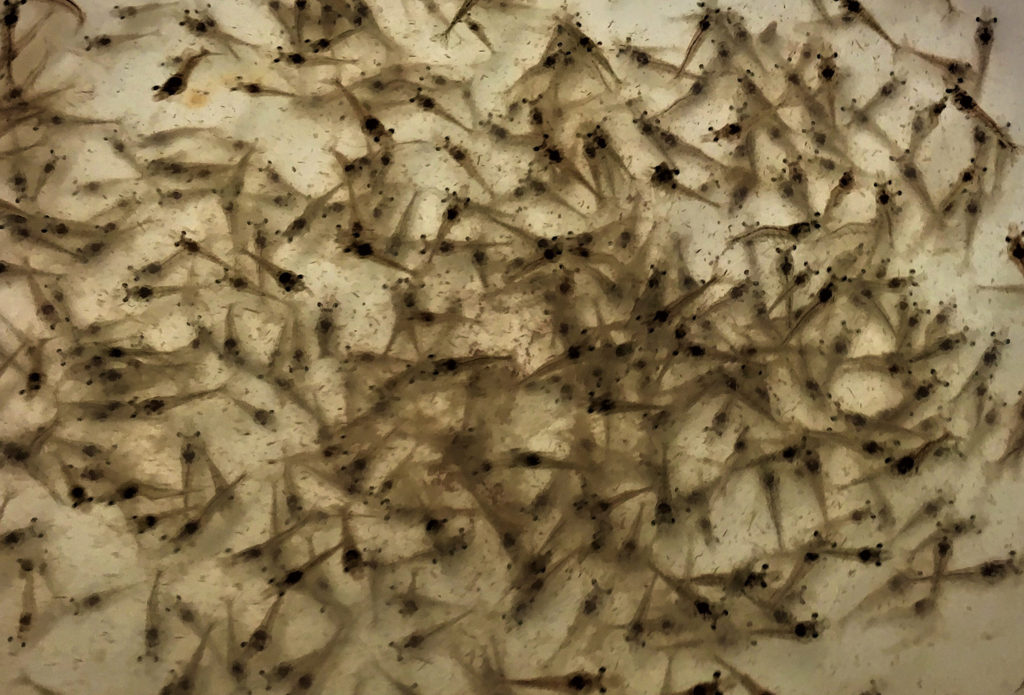 Study shows biofloc has positive effects on the immune response of Pacific white shrimp juveniles and can result in increased resistance to the IMNV virus.