Biofloc technology (BFT) systems are well established in the production chain of marine shrimp. Characterized by the stimulation of a microbial community, the BFT system is bio-secure and improves nutrition (supplementing the diet and improving gut health of the shrimp) and water quality (nitrifying compounds) with minimal to zero water exchange per cycle of production.

The formation of microbial aggregates, or bioflocs, is dependent on physical, chemical and biological interactions that are stimulated by the rate of mixing and oxygenation generated by the aeration process. Bacteria proliferate by attaching to the bubbles, utilizing the available nutrients and organic matter in the water column.

Bubble size generated by mechanical aeration plays an important role in biofloc formation. Bacteria adhered to nanobubbles form bioflocs more rapidly than with larger bubbles. Developing a mature biofloc is crucial to stabilizing both the availability of nutrients as a food supplement and the availability of nitrifying bacteria essential to maintaining optimal water quality in the BFT system (Fig. 1).

This new, mature bacterial biomass may be later consumed by protozoa, thus increasing the food availability in the BFT system, a phenomenon known as the “Microbial Loop” (Fig. 2). Within this context, it is essential that producers use efficient aeration devices that provide the best cost-benefit in terms of productivity. In recent years, the FURG team has focused its BFT research on studies of the effect of mechanical aeration on biofloc formation and availability.

The dissolved organic matter generated from the dead microalgae (and leftover feed) leads to a new trophic chain in which the dissolved organic matter is assimilated by bacteria, that are then consumed by other groups of microorganisms (such as flagellates), which in turn are preyed upon by ciliates, providing the development of other groups, such as rotifers and nematodes. The microorganisms developed from this loop contribute as a supplementary natural nutritional source for the shrimp and for the cycling of nutrients in the rearing ponds.

In this article, we present results of research to compare the performance of two commercial aeration systems, commercial air injectors (nozzles) and micro-perforated hoses (Aero-Tube™) – previously discussed in detail in several published papers – and their effect on the microbial composition and enhancement of the biofloc formation.

We are grateful for the financial support provided by the National Council for Scientific and Technological Development (CNPq), Research Support Foundation of the Rio Grande do Sul State (FAPERGS) and the Coordination for the Improvement of Higher Level Personnel (CAPES). Special thanks to All-aqua for donating the experimental air injectors and technical support. GUABI Animal Health and Nutrition S.A., AQUATEC and TREVISAN are also our sponsors.

This study evaluated the effect of three aeration systems on the development of the microbial community in biofloc technology systems. The first aeration system tested used commercial air injectors (nozzles) operated by a 2-hp centrifugal pump, and naturally aspirated ambient air at a rate of three times the water pumping volume. The nozzles were mounted on the bottom of the raceway and have a “snorkel” pipe that captures the atmospheric air and injects it into the water as nano-bubbles, providing a high transfer rate of dissolved oxygen. In addition, the directional flow generated from these nano-bubbles creates both horizontal and vertical water movement, keeping the solids in suspension, which is an essential requirement characteristic for success of the BFT system.

The trial was carried out at the Marine Station of Aquaculture, Federal University of Rio Grande (FURG), Brazil. Pacific white shrimp (Litopenaeus vannamei) postlarvae (PL) were procured for a commercial shrimp hatchery (Aquatec®, Canguaretama, Rio Grande do Norte State, Brazil) and raised for 70 days in two covered greenhouses with tanks lined with high-density polyethylene (HDPE, 1.0 mm). One greenhouse had twelve, 35-cubic-meter tanks operated with no water exchange and the other greenhouse had two, 237 square meters each, lined raceways. Shrimp PL were stocked at 500 animals per square meter in all treatments. The tanks and raceways were filled with sand-filtered, 28 ppt seawater.

To stimulate biofloc formation, the carbon to nitrogen (C:N) ratio of the experimental system was maintained at 15:1, per the methodology proposed by Avnimelech and Ebeling et al. Organic fertilization was implemented by adding sugarcane molasses (37.27 percent carbon content). To maintain the 15:1 C:N ratio, 6.0 grams of carbon (molasses) was added for every 1.0 gram of total ammonia nitrogen (TAN) measured in the BFT culture water.

Regarding water quality parameters in the experimental systems, measurements of temperature, dissolved oxygen (DO), pH, and salinity were collected daily using an YSI 556 MPS® multiparameter probe (YSI Incorporated, Yellow Springs, Ohio, USA). The pH and alkalinity were corrected with calcium hydroxide whenever the pH was < 7.0 and the alkalinity was ≤ 100 mg CaCO3 per liter. The alkalinity was measured by titration method once a week. Monitoring of total ammonia nitrogen (TAN), nitrite-nitrogen (NO2-N) , nitrate-nitrogen (NO3-N), phosphate (PO4+3-P), total suspended solids (TSS) and alkalinity were carried out once a week.

Shrimp were fed with a commercial diet (Guabi™ 40 percent crude protein) and rations were adjusted based on weekly growth of the animals. Commercial probiotics (INVE™ Sanolife PROW) were applied once a week to all experimental treatments in a proportion of 1 gram per thousand liters of water to help with the maintenance of water quality.

For assessment of the microbial community and quantification of the microorganisms present in the production systems, water samples (20 mL) were collected once a week from each experimental unit. The samples were fixed in 4 percent formalin (final concentration) and kept in amber flasks for further counting and identification of the main microorganism groups present.

For the procedure used for determination of bacterial abundance (and additional information on this study), consult the corresponding author. The microorganisms in samples were sorted into different groups; for bacteria: coccoids, free filamentous and attached filamentous bacteria, Vibrio and Bacillus; and for protozoa and other groups like flagellates, ciliates, diatoms, oocystes, amoeba, planktonema and groups of rotifers and nematodes.

Our results showed that there was a greater diversity of microorganisms (protozoa, microalgae and bacteria) and abundance (flagellate, ciliates, amoeba, diatoms, oocysts, planktonema, bacillus and free filamentous algae) in the systems with the air injector treatment (Fig. 3). The microorganisms’ composition was different in the other two systems/treatments (micro-perforated hose, and air injector + hose system, or mixed treatment) where flagellate, ciliate, diatoms, bacillus, vibrio and free filamentous occurred (Fig. 3).

The greater diversity of microorganisms produced in production water plays an important role in the energy flow of aquatic ecosystems. In addition, microorganisms are known not only as important sources of protein, but also for contributing to the lipid, mineral and vitamin needs of shrimp. Thus, the natural food supplied by the microbial aggregates serves as a supplemental source of nutrients to the shrimp and influencing the zootechnical performance of the system, resulting in better productivity in BFT shrimp culture systems.

The greater diversity of microorganisms found in the air injector treatment is likely to be related to the size of the air bubbles generated by this aeration system, which produces nano-bubbles (much smaller bubbles than other aeration systems). Nano-bubbles provide a larger surface area for bacteria to adhere to (Fig. 1). Once a large number of bacteria are attached to the nano-bubbles, bacterial flocs can quickly form. The speed of formation of the aggregates in relation to the size of the bubbles also favors the appearance of other groups of microorganisms in the culture system (Fig. 2), contributing to a greater diversity and nutritional contribution for the cultured organisms.

Another important aspect that must be considered is the abundance of organisms that was observed in the different types of aeration. This is related to the “top-down” and “bottom-up” processes that naturally occur in the trophic level present in the culture tank. Top-down refers to predation that occurs at higher trophic levels (top to bottom), such as shrimp preying on microorganisms (nutritional effect of aggregates) and causing variations in the abundance of these organisms in the culture system.

In the bottom-up process, the opposite happens, that is, the producer organisms are responsible for the regulation of the entire trophic level; bacteria, algae and other organisms in the phytoplankton are the primary producers that influence the next trophic level. This may explain the different concentrations of microorganisms observed, as organisms are preying on others or are being preyed upon (top-down” and “bottom-up).

The results of our study presented in this article show that the air-injector nozzle treatment generated a greater diversity of microorganisms in a biofloc system, likely supporting improved development of bioflocs, and contributing to an increase in complementary food availability and resulting in overall improved shrimp productivity. 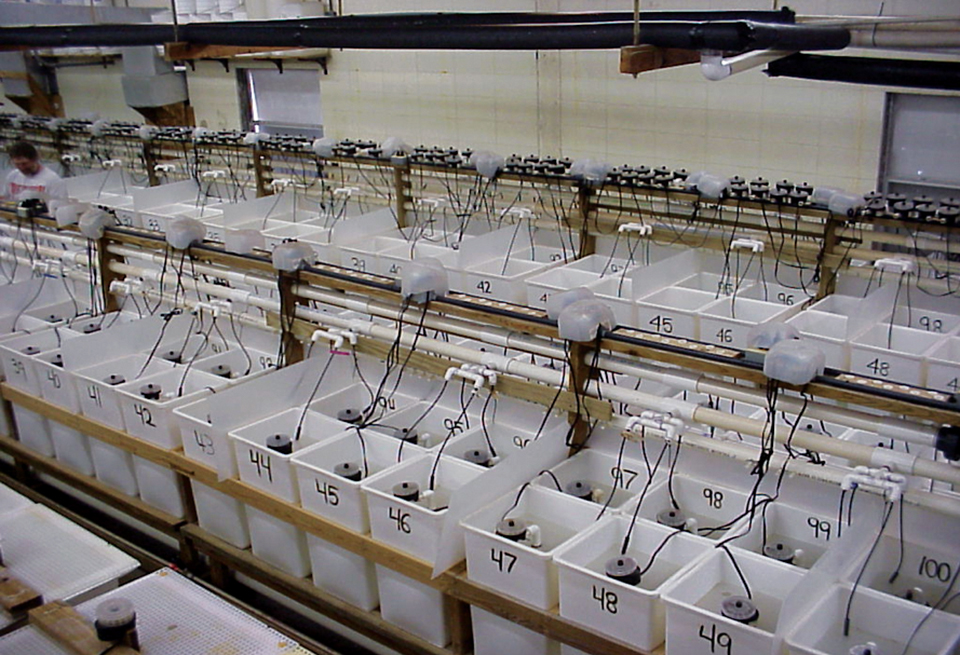 What makes bioflocs great for shrimp?

Single-celled proteins in bioflocs can provide protein and other nutrients in shrimp feed, but what makes them enhance growth performance in shrimp?