Aquaculture is expanding rapidly throughout the world, and the driving forces for this expansion include the need for additional food resources, as well as the recognition of marine oils and other products as healthy substitutes for other traditional products. New potential aquatic species are being studied and cultured each year, creating a need for specialized formulated feeds and feed ingredients.

However, one of the major challenges faced by the aquaculture industries worldwide includes sourcing alternative proteins and oils for animal feeds.

While the fishmeal content of some feeds has been reduced considerably, complete replacement of fishmeal and fish oil in aquaculture feeds faces some challenges, particularly for carnivorous species, as vegetable proteins seem to have inappropriate amino acid balance and poor protein digestibility. On the other hand, bottlenecks in the substitution of fish oil with blends of inexpensive vegetable oil in aquaculture feeds may also affect consumer demand, because data suggest that the ratio of omega-6 (n-6) and omega-3 (n-3) fatty acids in human diets is already too high.

While most seafood provides nutritional benefits, not all are created equal when it comes to n-3s. Fish oil replacement with alternative lipid sources seems to be possible if the essential fatty acid (EFA) requirements are satisfied. Fatty acids are well known to have multifunctional effects on the metabolism of fish and shrimp.

Several studies have shown that the total substitution of fish oil with animal fats in marine fish impair nutritional value of the fatty acid composition of juveniles by providing lower EPA+DHA levels, decreasing total n-3 PUFA levels and n-3/n-6 ratio. Moreover, in order to maintain good health, a high weight gain and fertility, fish should receive a diet of adequate values as well as a balanced composition of proteins (amino acids), fats (fatty acids), vitamins and minerals. In addition, animal fats are usually unbalanced especially in terms of fatty acid profiles due to their low-levels of HUFAs. The use of unbalanced feeds in terms of fatty acid composition has been reported as the cause of high, pathological level of intestinal accumulation of lipids.

Within the category of oil seeds, soybean oil seems to be the most promising alternative for fish oil. Vegetable oils high in linolenic acid promoted better growth of shrimp species than those high in linoleic acid, while sardine and short-necked clam oils provided better growth and survival than any of the vegetable oils. For the same shrimp species, the superiority of pollock residual oil and short-necked clam oil over soybean oil has also been reported. In fish species, studies suggest that fish oil can be replaced by up to 100 percent with canola oil and by up to 50 percent with linseed oil with no significant effect on growth.

Likewise, both oil content and quality have attracted much attention in soybean genetics and breeding programs, due to the increased need for vegetable oils in aquaculture feeds. Substantial efforts have been made to increase the oxidative stability of soybean oil as a means to avoid trans-fats generated through the hydrogenation process and to enhance n-3 fatty acid content of the oil for use in feed applications.

There are, however, alternative sources of n-3 fatty acids, and research is underway to increase the n-3 fatty acid content in animal by-products for feed but to date, results obtained from different feeding studies are contradictory. Beef tallow has been reported to provide better growth and survival in shrimp than linseed, menhaden and corn oils. In addition, it has been observed that the nutritional value of sunflower oil, linseed oil, soybean oil and peanut oil were similar; although it appeared that peanut oil gave the best performance.

The potential of microalgae as renewable source for oil production is very promising because of higher growth rates and the capability to accumulate higher amounts of lipids (from 20 to 80 percent dry weight) than conventional oil crops (not more than 5 percent of dry weight), and therefore the oil yield per hectare obtained from microalgae can greatly exceed the yield from oil plants like rapeseed, palm, or sunflower. In addition, omega-3 fatty acids are found in high concentrations in many microalgae, including docosahexaenoic acid, commonly known as DHA. Most fatty acids in algal cells are present as part of membrane lipids or as part of storage lipids, mainly triacylglycerols (TAGs).

Purified oil from insects is a new and exciting ingredient that can be used in a variety of applications, including aquaculture feeds. Oils extracted from insects have exciting physical-chemical properties and fatty acid compositions. For example, the amounts of saturated and unsaturated fatty acids these oils contain are comparable with those of oils already commonly used in the feed industry, such as sesame, groundnut, sunflower and cottonseed oils.

In addition, insect oils contain higher concentrations of sterols and are highly stable. The low amounts of polyunsaturated fatty acids like linoleic and linolenic acids in insect oils give them high oxidative stability. Their fatty acid composition has a much higher influence on the stability of these oils than the minor components of antioxidants present in the oil. It has been found that blending sunflower oil with purified oil from insects resulted in an increase of oleic and a decrease of linoleic acid and improved the oxidative stability of sunflower oil.

The main nutritional issue to replace fish oil might be the cholesterol content in oils of terrestrial origin. It can be argued that currently used aquafeeds, being low in cholesterol content, are driving cultured fish to persistently produce cholesterol. But an important here consideration is that cholesterol biosynthesis is a rather expensive metabolic exercise. Likewise, shrimp are incapable of synthesizing steroids, and must, therefore, obtain cholesterol from their feed.

The dedicated pathway to sterol synthesis in photosynthetic plants occurs at the squalene stage through the activity of squalene synthetase. The commonly consumed plant sterols are sitosterol, stigmasterol and campesterol, which are predominantly supplied by vegetable oils. It is well known that the amount of cholesterol made by plants is practically negligible. On the other hand, this opens the door for the engineering of a high-cholesterol model plant that can be produced via synthetic biology.

Developing alternative sources of key ingredients for aquafeeds – like proteins and oils – is a major challenge to the expansion of aquaculture globally. However, the replacement of fish oil in aquaculture feeds with alternative lipid sources (various oils seeds, microalgae, insects and other) is feasible as long as the requirements for essential fatty acid (EFA) are properly satisfied.

The common approach of using a single pattern of amino acids or fatty acids as a yardstick in comparing the nutritive value of an aquaculture feed for any species has the same limitations as the concept of protein or fat quality, and a careful evaluation of the large number of available research studies and scientific publications on the topic is recommended. 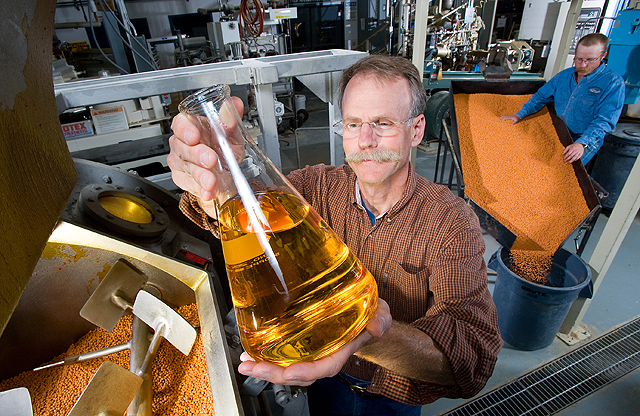