As alternatives to terrestrial crops, researchers are investigating marine microalgae – because of their reported balanced essential amino acids, minerals, vitamins, and long-chain omega-3 fatty acids – as potential fishmeal and fish oil replacements in fish feeds. The peer-reviewed literature, however, lacks information on how using marine microalgae in fish-free diets affects growth, feed conversion and fillet quality of tilapia. There also are limited published data on the market price of fish-free diets made with alternative ingredients that show potential for economies of scale.

The feeding experiment was designed and carried out using a completely randomized design of four diets × three replicates tanks in recirculating aquaculture systems (RAS). Four hundred eighty Nile tilapia (mean initial weight 34.5 ± 2.06 grams) were separated into randomized groups of 40, bulk weighed, and transferred to a tank. Tilapia had been acclimated to the fishmeal- and fish oil- containing reference diet for seven days prior to distribution. The initial stocking density remained within levels recommended to avoid physiological stress on tilapia (< 0.25 pounds per gallon in 80-gallon RAS tanks). Water quality was carefully monitored daily to maintain favorable conditions for tilapia across all RAS tanks and kept the water temperature at 28.7 ± 0.25 degrees-C, pH at 7.1 ± 0.1, dissolved oxygen at 6.1 ± 0.15 mg per liter, total ammonia nitrogen at 0.26 ± 0.1 mg per liter, and nitrite nitrogen at 0.3 ± 0.01 mg per liter.

For the nutritional feeding trial, we incorporated N. oculata defatted biomass to replace different percentages of fishmeal and whole cell Schizochytrium sp. to replace all fish oil in three tilapia experimental diets. These three diet formulations were based on our previous digestibility data for the algae. We compared these three experimental diets to a reference diet (served as control diet) containing fishmeal/fish oil (FMFO) at levels found in commercial tilapia feed. All diets were iso-nitrogenous (37 percent crude protein) and iso-energetic (12 kJ/g).

Microalgae inclusion diets used N. oculata defatted biomass to replace 33 percent (33NS), 66 percent (66NS), and 100 percent (100NS) of the fishmeal and whole cell Schizochytrium sp. to replace all fish oil in the test diets (33NS, 66NS, 100NS). Thus N. oculata comprised 3, 5 and 8 percent of the diet by weight, respectively, and Schizochytrium sp. made up 3.2 percent of the diet by weight. Fish were fed twice daily at 8 percent of body weight until day 60, 6 percent until day 121, and 4 percent until day 183.

Fish biomass was measured monthly, and we randomly selected and weighed 10 individual fish from the total starting stock at the beginning of the experiment, then euthanized and stored fish tissues for biochemical analysis. At day 121 of the experiment, we euthanized six fish per tank, and six additional fish at the end of the trial on day 185. Half of the fish sampled on day 121 and day 185 were filleted and half were kept whole and then stored for further processing.

We carried out research to develop a new aquafeed formula by combining the protein-rich (50 percent) defatted marine microalgal co-products (under-utilized left-over biomass of Nannochloropsis oculata after EPA oil extraction for human supplement) with another DHA-rich (30 percent of total fatty acids) marine microalga (Schizochytrium sp.), increasingly available at commercial scale, to fully replace fishmeal and fish oil (fish-free) in tilapia aquafeeds. This study builds on another microalgae aquafeeds study we recently carried out, and as was previously reported, Schizochytrium sp. is a highly digestible source of nutrients for tilapia and can fully replace fish oil in tilapia feed.

Results of the study presented here demonstrate the feasibility of combining commercially available microalgal biomasses to formulate fish-free aquaculture feeds that are high-performing and show potential to become cost-competitive. This is the first report of successfully combining protein-rich-defatted biomass of one microalgal species with DHA-rich whole-cell biomass of another microalgal species to achieve full replacement of fishmeal and fish oil ingredients in a tilapia feed formulation. This also is the first report of improved feed utilization metrics, including growth, weight gain, specific growth rate and of beneficial DHA fatty acid profile in Nile tilapia fed a fish-free microalgal diet compared to a commercial feed formulation containing fishmeal and fish oil.

Second, we found the highest in-vitro protein digestibility in the fish-free feed, suggesting that protein originating from defatted N. oculata biomass was the most digestible when in the presence of highly digestible Schizochytrium sp., presumably due to the latter triggering certain digestive enzymes, release and activity.

Thus, the combination of defatted N. oculata biomass and Schizochytrium sp. appears to be better suited to the digestive enzymes present in tilapia digestive systems than conventional diets with fishmeal and fish oil; and the presence of Schizochytrium sp. may support more efficient digestion of the fish free-feed at the higher inclusion levels of N. oculata defatted biomass. However, further research is necessary to elucidate the digestive enzyme profiles present under different dietary regimes and to assess the differences in the digestibility of microalgal fish-free feeds compared to conventional feed with fishmeal and fish oil.

Our study reflects the human health benefit of using highly digestible DHA-rich Schizochytrium, given that tilapia fed the fish-free feed yielded the highest amount of DHA in fillet – almost twice that of conventional feed. Results are consistent with our previous findings where increasing levels of Schizochytrium sp. corresponded to reduced levels of fish oil in tilapia feed and resulted in significant increases in fillet DHA deposition compared to a reference diet containing fishmeal and fish oil.

Nile tilapia is not an oily fish like salmon, but nevertheless deserves efforts to improve nutritional value of farmed fish because it is produced in huge tonnages and is an important component of human diets in many parts of the world, especially Asia and Africa. Thus, improvement of tilapia nutritional value through increased levels of DHA could benefit a very large number of people, many of whom have low levels of omega-3 long-chain polyunsaturated fatty acids (LC-PUFA) in their diets.

Our results support the relative ease of enhancing the omega-3 LC PUFA composition of tilapia fillets, while also achieving a fish-free diet, by combining Schizochytrium sp. and N. oculata defatted biomass. Tilapia with elevated DHA levels after eating fish-free feed will have tremendous market potential. Feed manufacturers can exploit this feature to market aquafeeds to aquaculturists aiming to cater to health-conscious consumers who are willing to pay a premium for DHA-enhanced tilapia fillets.

Regarding the economic analysis of fish-free feed formulated with microalgae blends, the similar estimated costs of the fish-free feed (100NS) and reference diet suggest that using combinations of microalgal biomass – that are on track to achieve economies of scale – is a feasible strategy for achieving large-scale production of cost-competitive fish-free diets. The production of Schizochytrium sp., already at commercial scale, is also anticipated to grow, as the projected compound annual growth rate of DHA from microalgae sources is expected to exceed 10 percent in the near future.

For such a high-performing, fish-free feed for tilapia to succeed in the market, we acknowledge that Schizochytrium sp. needs to become cost-competitive with fish oil sources for aquaculture feeds. Analysts predict ongoing technological improvements and R&D efforts to produce Schizochytrium sp. will quickly make it a cost competitive substitute for fish oil due to lower production costs and higher market availability. Fish oil substitutes with Schizochytrium sp have emerged within the last year with new products from many major agribusiness and animal nutrition companies, presumably due to favorable economics and high production volumes.

Alternative feed ingredients like natural marine algal oil have also recently been approved for use in the supply chain by a major UK retailer. Given the proliferation of alternative feed ingredients by global industry leaders and stakeholders (aquafeed company, innovators, aquafarmers, investors, and aquaculture supply chain), market opportunities appear to be growing and evolving for using microalgal protein and oil for fish-free feed.

Our results provide a framework for the development of fish-free feeds and the first evidence of a high performing feed for tilapia that combines two different marine microalgae. Defatted marine microalgae, a protein-rich biomass left over after extracting oil for other products, is currently under-utilized (often creating disposal problems even though it is food-grade) and is increasingly available as the algal-oil nutraceutical market grows.

Advancing the use of microalgal defatted biomass in aquafeeds would improve the sustainability of aquaculture by reducing its reliance on fishmeal extracted from forage fisheries. Combining under-utilized defatted biomass protein with DHA-rich marine microalga in the fish-free feed resulted in better tilapia growth compared with fish fed a conventional diet containing fishmeal and fish oil.

Furthermore, tilapia fed the fish-free feed yielded the highest amount of DHA in the fillet, almost twice higher than in those fed conventional feed. Thus, feeding a DHA-rich, microalgae blended diet to farmed tilapia is a practical way to improve human health benefits of eating farmed tilapia. Moreover, these results suggest other kinds of microalgae combinations are possible and worthy of future investigation. Our fish-free formulation also shows potential cost-competitiveness, given that the ECR of the fish-free diet was slightly lower, though not significantly different, than the reference diet.

The microalgal ingredients in our fish-free feed, thus, show potential to supply the expanding aquaculture industry with a stable and affordable supply of healthy protein and oil for fish-free feed, doing so without causing harm to oceans or food security of resource-poor people.

Yellowtail snappers produce small larvae that are a challenge to rear. Initial protocols have resulted in survival of only 3 percent from egg to juvenile. 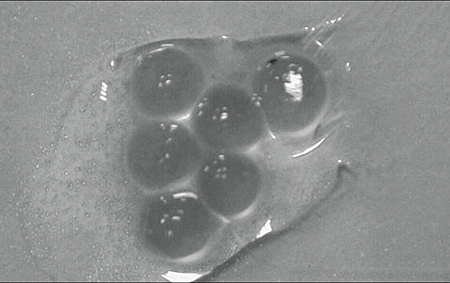 The entrapment, storage and processing of microalgae into alginate beads is a useful technology for stock culture management. 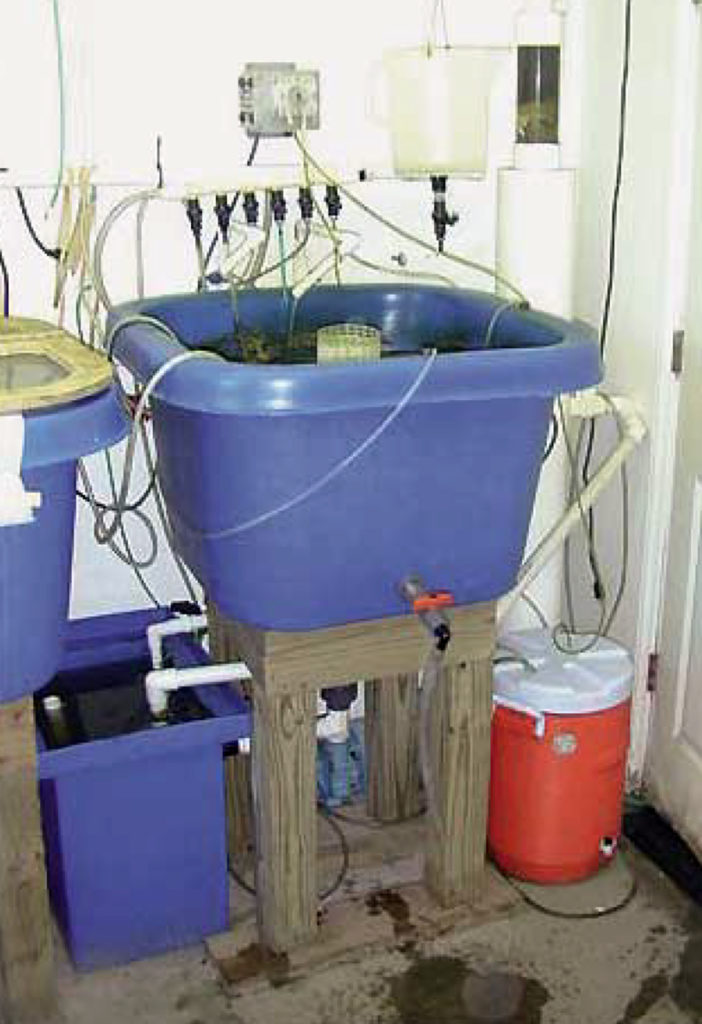 Intensive rotifer culture systems can significantly reduce the space and labor requirements for the production of rotifers in marine finfish hatcheries.