Palmer: With international support, a fish consumption and nutrition strategy is achievable 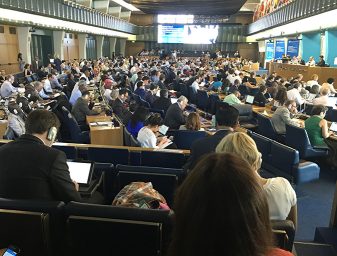 I am here in Rome at FAO COFI 32 to make a presentation “Promoting Seafood Consumption: A Tool for Improving Nutrition, Health and Regional Development – Public Policy and Producers effort.” I am indebted to the Mexican government, which has invested in seafood promotion and is running this side event to COFI with a promised seafood lunch.

Not aware of COFI? The Committee on Fisheries (COFI) is a subsidiary body of the United Nations’ Food and Agriculture Organization (FAO) Council, and was established by the FAO Conference at its Thirteenth Session in 1965.

The Committee presently constitutes the only global inter-governmental forum where major international fisheries and aquaculture problems and issues are examined and recommendations addressed to governments, regional fishery bodies, NGOs, fish-workers, FAO and international community, periodically on a worldwide basis. COFI has also been used as a forum in which global agreements and non-binding instruments were negotiated.

Today under Agenda nr 8 the subject was Second International Conference on Nutrition Follow-up: The Contribution of Fisheries and Aquaculture to Improved Nutrition.

Fisheries and aquaculture can play a critical role in global food security and nutrition. Aquaculture production is steadily growing and is already providing most of the fish consumed by humans.

The words from the paperwork show: “In November 2014, by adopting the Rome Declaration and the Framework for Action at the ICN2, world leaders renewed their commitments to establish and implement policies aimed at eradicating malnutrition and transforming the food systems to make nutritious diets available to all. Fisheries and aquaculture can play a critical role in global food security and nutrition. Aquaculture production is steadily growing and is already providing most of the fish consumed by humans. Fish provides a source of bio-available fish proteins, vitamins and minerals, as well as essential health-promoting fatty acids. FAO has embarked on a number of activities to support countries to improve their fisheries and aquaculture sectors and to develop local fish production, create employment, and linking fishery products to markets. Fisheries and aquaculture provide a unique window of opportunity for ICN2 follow-up towards achieving healthy diets.”

These two questions were posed:
1. Advise on how best to prioritize fish consumption in nutrition strategies to maximally reap the nutrition and health-promoting benefits; and
2. Advise on approaches to improve data collection on the nutrient composition of fish and fishery products.

If you were answering these questions what would your comments be?

Maybe we can assist in this outcome by coming up with some solutions and promoting them. Feel free to email your comments to Roy.D.Palmer@seafoodprofessionals.org with FAO COFI 32 as the heading.

I particularly enjoyed the comments from one of the countries represented highlighting the fact that it has only taken 41 sessions (that would be more than 41 years) to finally get fish/seafood on the agenda, suggesting that attendees should hasten with their inputs. 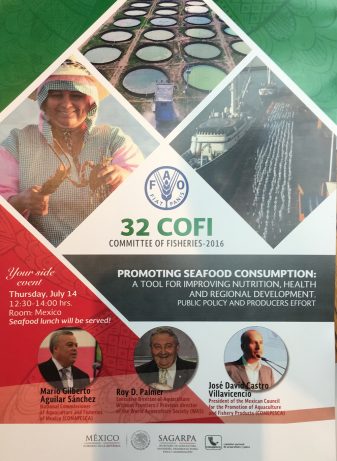 I am always struck by the efforts that a number of countries that go an extra mile to ensure actions can take place and certainly one of those is Norway, as they are regularly putting forward ideas and backing them with funding concepts. In this discussion they pointed out that some 35 percent of the harvest was lost or wasted, which was the equivalent of some 30 million metric tons (MT) lost in the time from catch to consumption.

They said that they believed there were five areas where the losses were made and that they were keen to create some guidelines for the world about these areas and to further assist in implementing the guidelines, highlighting an arrangement they had with Angola in this regard. This was well supported by others at the meeting.

Iceland, always straight to the heart of the issue, suggested that there should be a focus on having fish quality better recognized with post-harvest issues a priority along with data improvement. On the latter they commented that the data could concentrate simply on good and poor quality.

IFFO, the Marine Ingredients Organisation, represented by Director General Andrew Mallison, highlighted research from University of Stirling on food losses and waste which he suggested that, if well organized, could create 3 million MT of farmed fish.

It was great to see countries such as Somalia, Peru (seafood consumption moved from 12 to 16 kgs per person per annum from 2011-2016), Venezuela, Morocco and, of course, Mexico talk about actions that they are all doing or have done to promote seafood in their countries.

Senegal, speaking on behalf of the African Union, mentioned that some 20 million MT are traded in Africa each year, but there is generally low consumption and problems with infrastructure. They were keen to find ways to assist women, who predominantly play the major role in post-harvest.

Looking forward to hearing from you on how we can help our COFI representatives answer these important questions.