White spot syndrome is the most pathogenic of all the serious diseases in the global shrimp industry. The white spot virus (WSSV) was first reported in China in 1992, from where it spread to all of the Asian countries that culture Penaeid shrimp. In 1995, WSSV was reported in the United States in frozen shrimp imported from Asia. By 2000, white spot was established in most of the major shrimp-farming countries in the Americas, causing major losses for shrimp farmers. On Colombia’s Pacific coast, the appearance of WSSV in Litopenaeus vannamei in 1999 caused mortalities close to 100 percent at shrimp farms.

The original populations were those developed for TSV resistance and high growth rates in a selective-breeding program on the Caribbean coast. Seven batches of about 70 families each were challenged orally with feed containing WSSV.

The heritability of WSSV resistance was consistently so low it could not be used effectively to obtain resistant populations reasonably quickly. Furthermore, there was a negative correlation between WSSV resistance and growth rate, indicating that gains in resistance would be associated with decreased growth rates. To make matters even worse, there also appeared to be a negative relation between resistance and reproductive ability, which would lead to rapid loss of resistance when, other things being equal, populations were multiplied in WSSV-free facilities.

Unlike the case with TSV several years earlier, survival was extremely low in commercial production. This suggested that animals with potentially useful levels of resistance were extremely rare, and the frequency of resistance genes that confer resistance was also very low.

Based on this situation, CENIACUA developed a mass-selection strategy based on extremely heavy selection pressure for survival in tanks with large numbers of animals. The very few survivors from commercial WSSV-infected ponds, which often initially held 100,000 animals, were collected and maintained in the CENIACUA branch located on the Pacific. These stocks were raised in rearing tanks, where they very slowly grew to adult size.

When they eventually reached adult size, their reproductive performance was poor. To improve reproduction, ablated and matured females were artificially inseminated with one or two spermatophores. Each batch of offspring produced by the survivors was challenged with WSSV at the P.L.40 stage. The mortality rates were high, providing a selection pressure of at least 1:10,000.

The survivors from each batch were grown to broodstock size to produce the next generation. After five generations were produced with this scheme, an increase in the final survival was observed in the presence of WSSV.

The first trial was carried out at the University of Arizona Aquaculture Pathology Laboratory. Juvenile shrimp weighing 1 to 2 g each were kept in separate tanks and challenged with WSSV in feed. Three tanks held the CENIACUA line 1 (CNK1), and three tanks held CENIACUA line 2 (CNK2). Three tanks were used for the control group, shrimp from the specific pathogen-free (SPF) Kona line, while three additional tanks were used as negative controls, with one tank for each group.

The challenged control populations all died after six days. None of the unchallenged animals died in the control tanks. In stark contrast to the SPF lines, the selected line survival after 17 days was 36 percent for CNK1 and 47 percent for CNK2 (Fig. 1).

Based on these results, how would the CNK stocks perform when mixed with susceptible stock, which is likely to occur in a commercial farming operation? The cohabitation trial was carried out at CENIACUA’s experimental bioassay laboratory. The same CNK1 and CNK2 lines were mixed with High Health (H.H.) stock, which had never been selected for WSSV resistance. The three lines were differentially tagged with fluorescent elastomers, then placed as mixed populations in two similar tanks. There they were challenged with a single feeding of WSSV-infected minced tissue at a rate of 5 percent body weight. As a negative control, a tank containing an uninfected mixed population was set up.

According to Dr. Don Lightner, a pre-eminent pathologist of cultured shrimp and finfish at the University of Arizona’s Department of Veterinary Science and Microbiology, WSSV challenges performed at the University of Arizona typically result in close to 100 percent mortality. The survival of the CENIACUA selected lines was much higher than in other tests and much greater than that of the unselected lines, which all died.

Shrimp that survived in both trials were analyzed by polymerase chain reaction (PCR) and histology. All the moribund animals analyzed displayed the intranuclear basophilic inclusion bodies typical of WSS. Also, pleopods from all the moribund shrimp were positive for WSSV. In contrast, the survivors displayed neither the inclusion bodies nor positive results by PCR. This suggested the animals were resistant to WSSV infection, rather than that they survived infection.

The final survival of the WSSV-resistant lines was similar in both trials: 41 percent and 34.7 percent. With cohabitation of resistant and susceptible shrimp in the same experimental unit, the WSSV viral load is likely greater than in tanks with only resistant lines, as susceptible shrimp are better hosts for the virus. In addition, when they die, they add inoculum to the tanks. In a real-life commercial situation, this scenario is the most likely one, because in a given population, only a fraction will posses genetic resistance to a disease pathogen, in this case WSSV. However, even under these conditions, the survival rates were similar to those in separate tanks.

This work confirmed that the Colombian breeding program has produced shrimp populations that are much more resistant to WSSV than populations unselected for WSSV. The difficulty remains as to whether it is possible to maintain resistance to WSSV without continually exposing shrimp to WSSV.

The authors suggest that due to the low reproductive rate of resistant animals and the fact that it has still not been possible to produce populations that are 100 percent resistant, the resistance of selected shrimp will rapidly decline if they are not systematically exposed to WSSV. This makes it extremely unlikely that it will be possible to produce stocks that are both specific pathogen-free and specific pathogen-resistant. 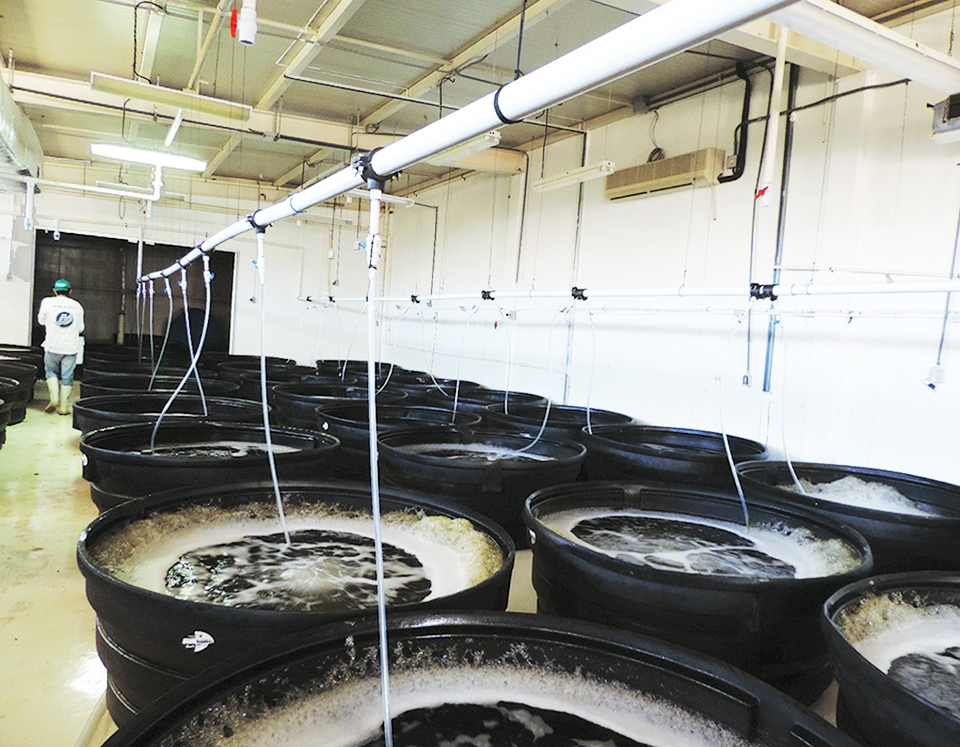 The authors recently performed a study to evaluate immunity to white spot syndrome virus and virulent Vibrio parahaemolyticus in shrimp treated with a new mineral extract additive in pelletized feeds.