A review of pond water studies at the Oceanic Institute

Studies on penaeid shrimp nutrition often are conducted in clean laboratory conditions to mitigate the effects of variable water quality found in shrimp ponds. Although this approach has contributed to a greater understanding of shrimp nutrition, the practical application of data from these studies is limited because the experimental conditions do not mimic a shrimp pond environment.

It has been assumed that shrimp reared in intensive production systems receive little or no nutrition from natural pond biota and are almost entirely dependent on high-quality, formulated feeds to satisfy their nutritional requirements. However, results from our work at OI indicate that juvenile shrimp reared in intensive shrimp pond water and fed a commercial diet ad libitum grew 48 to 89 percent faster than shrimp fed an identical diet but maintained in clear well water devoid of natural productivity. This growth enhancing effect of pond water is significant because there are no feed additives or ingredients currently available that can be incorporated into formulated shrimp diets to improve shrimp performance to this extent.

In addition to the growth enhancing effect on juvenile shrimp, pond water can enhance the growth of postlarvae and broodstock shrimp by 416 percent and 33 percent, respectively, over growth rates attained in clear well water. Ontogenetic differences in the ability of shrimp to exploit the growth enhancing effect of pond water may be related to the size and structure of the shrimp’s feeding appendages, because growth enhancement likely results from the assimilation of organic particles produced autochthonously in the culture environment. Smaller shrimp may be able to manipulate and ingest these particles more effectively than larger shrimp.

In an attempt to characterize these growth-enhancing particles, we conducted an experiment to compare the effects of pond water, with selected particles removed, on the growth of juvenile L. vannamei. Particles were removed by passing the water through a series of mechanical filters and an activated carbon filter. In the presence of suspended particles between 0.5 and 5.0 μm, shrimp growth rates increased 53 percent over growth rates attained in clear well water, and particles greater than 5.0 μm improved growth by an additional 36 percent. Particles less than 0.5 μm, including dissolved organic matter, did not appear to contribute to shrimp growth.

In this study, almost half of the particulate organic carbon in the pond water was living carbon in the form of pennate and centric diatoms (Fig. 1). Diatoms are readily digestible by shrimp because of their low fiber content and they generally contain high levels of nutritious polyunsaturated fatty acids. Penaeid shrimp are known to consume diatoms in the wild and in aquaculture ponds, and diatoms were probably an important dietary item for shrimp in this study. Fecal strands excreted by the shrimp contained numerous empty diatom frustules, but it is unclear if diatoms were ingested live or as a component of microbialdetrital aggregates.

In a laboratory feeding study, we have shown that juvenile shrimp can survive and grow on a live monoculture of the diatom, Chaetoceros sp., as their sole source of food. In this study, shrimp fed Chaetoceros grew 0.32 grams per week, which is similar to growth rates reported for unfed juvenile shrimp reared in tanks receiving flow-through pond water from an intensive shrimp pond. In addition, shrimp fed Chaetoceros exhibited nucleic acid concentrations and RNA/DNA ratios that are almost identical to values reported for unfed shrimp reared in the microbially rich pond water (Table 1). It appears that the live diatom component of the pond water contributed significantly to the growth enhancing effect reported in these earlier pond water studies.

In addition to a direct nutritional benefit, pond water affects both the abundance and species composition of microflora in shrimp mid- and hindguts. Guts of shrimp reared in pond water have significantly lower numbers of aerobic bacteria and a higher aerobic gut floral diversity compared to guts of well water-reared shrimp.

In the studies summarized above, the pond water originated from a 337-square-meter round pond used for intensive shrimp culture. Management protocols for this pond include daily water exchanges that average about 30 percent of the total pond volume per day throughout the grow-out period. However, in light of the devastating disease problems currently plaguing the global shrimp farming industry, water exchange has become a risky management option for maintaining acceptable water quality.

This situation has resulted in the emergence of novel shrimp production systems that rely on pathogen exclusion, including reduced or zero water exchange. With these new production systems, shrimp farmers and researchers have a unique opportunity to further exploit the natural productivity to enhance shrimp growth and survival.

At OI, we have conducted several grow-out trials in a 58-square-meter recirculating raceway designed for pathogen exclusion, and this system was described in a recent issue of the Global Aquaculture Advocate (volume 2, issue 4/5, pp. 50 and 52). Currently, the raceway is stocked with L. vannamei at a density of 200 shrimp per square meter. Shrimp have grown from 2.0 grams to 12.2 grams in seven weeks and the raceway will be harvested when shrimp reach about 23 grams. For water filtration, the system relies on a 25-cubic-foot propeller-washed bead filter (PBF) for solids removal and biofiltration. Importantly, the PBF allows a sufficient amount of microalgae to pass through it so that a “green water” environment can be maintained. In this type of environment, shrimp can take advantage of the growth enhancing particles described earlier.

Similar to outdoor pond systems, the availability of live algal cells is not constant in the raceway due to periodic blooms and crashes. After an algal crash, sedimented cells rapidly decompose by physical, chemical, and biological agents. However, unlike detritus derived from vascular plants, microalgal detritus is not refractory and shrimp can obtain substantial amounts of nutrients, including nitrogen, from this detrital resource. In an effort to manage algal blooms in the raceway, and as part of the operational protocol for the PBF, we periodically clean or backwash the PBF to remove accumulated solids. Because of this activity, replacement water is added to the raceway at a rate of about 1.5 percent of the total volume per day throughout the grow-out period. Backwash contains uneaten feed, feces, molts, detritus, microbes, and meiofauna that are nutritionally valuable to the shrimp.

In a recent experiment, we determined that backwash from the raceway PBF can increase shrimp growth 172 percent over growth rates of shrimp without access to PBF backwash, despite shrimp in both treatments receiving a commercial shrimp feed ad libitum. This study indicates that bead filter backwash can more than double shrimp growth and calls into question the need to remove these particles from the culture environment.

A number of commercial shrimp farms and research organizations are evaluating “static” production systems that rely on zero water exchange. With this approach, particles remain in the culture environment and inorganic nitrogen control depends on in situ biofiltration. Belize Aquaculture, Ltd. has taken the lead in developing a zero exchange system using low-protein feeds and heavy aeration.

Similar to the round pond and raceway system described above, this zero exchange system takes advantage of microbes and associated detritus as a source of supplemental food for the shrimp. However, unlike these other production systems, there is a predictable shift in microbial community structure over the course of the grow-out, where mixed photoautotrophic/heterotrophic microbial communities are replaced by bacterial “floc.”

Interestingly, by week 6, NH3-N concentrations exceeded 4.4 milligrams per liter in all six tanks, so sugar was added to increase the carbon:nitrogen ratio in the water column. An immediate and dramatic reduction in NH3-N concentration was observed in all tanks, and this was likely due to a bacterial bloom that served as a nitrogen sink. And it is these bacteria that help form microbial-detrital aggregates that ultimately contribute to enhanced shrimp growth.

In conclusion, the intensive shrimp production systems described above all depend on a healthy and diverse microbial community to enhance shrimp growth and maintain acceptable water quality. Clearly, more research is needed to identify beneficial microbes and develop management strategies to ensure their persistence in the system. 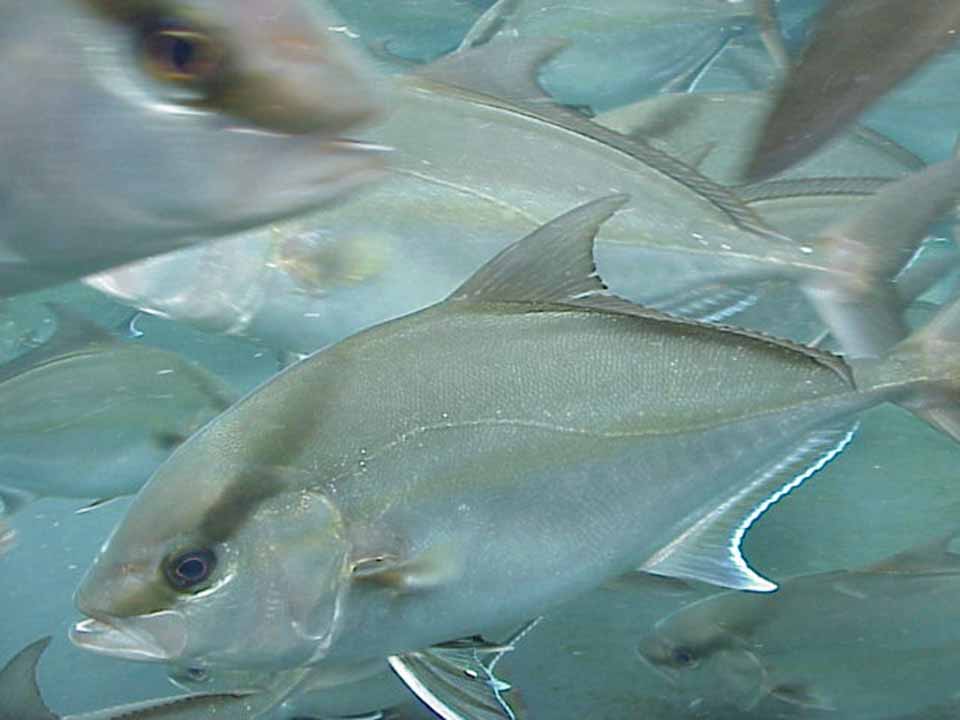 Amberjacks have excellent aquaculture potential due to their adaptability to conditions of intensive culture, extremely fast growth, and high market value. 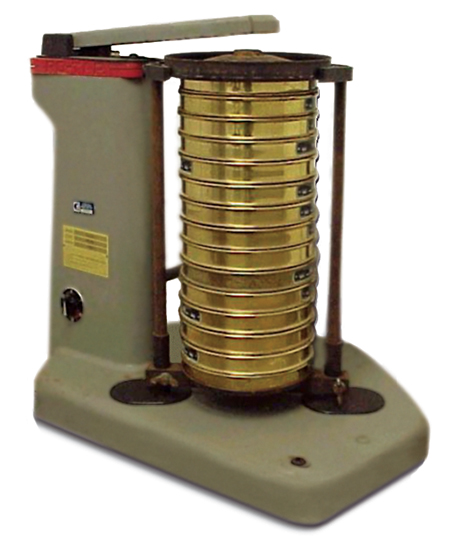 Formulated shrimp feed represents about 50 percent of production costs, but even more if the feed is wasted because of poor quality.