Josh Goldman, founder and CEO of barramundi producer Australis Aquaculture, is on a mission to reproduce Asparagopsis, a tropical seaweed that could significantly reduce the climate impact of beef production.

Early last year Goldman launched Greener Grazing to develop the technology to produce this pinkish-red sea plant at commercial scale. If it were added to the livestock feed of the world’s 1.5 billion cows, Goldman says it could dramatically reduce theirs and other ruminant animals’ burping of methane gas, which, according to the United Nations, is responsible for 14.5 percent of the world’s annual greenhouse gas emissions.

Goldman read original research from Australia’s James Cook University in 2017 on Asparagopsis’ potential to reduce methane burps. Intrigued, he called the researchers to find out where the seaweed was going to come from.

“They didn’t know – they were chemistry guys,” he said. “But it seemed like an important and interesting challenge to try and close the life cycle of Asparagopsis and accelerate its commercialization, as it could have a major real-world impact.”

Asparagopsis, a delicate, fragile and complex species of tri-phasic seaweed, has not been completely understood or successfully cultivated until recently. It has uniquely high concentrations of halogenated bromoforms, which target the specific microbes responsible for methane production in ruminant animals like cows, leaving more energy for digestion.

Greener Grazing assembled a team of researchers in Portugal and on Australis’ barramundi farm in central Vietnam, financing their work through a combination of investment from Australis Aquaculture ­– the world’s biggest barramundi (Asian sea bass, Lates calcarifer) producer – and outside philanthropic capital from major foundations.

“It’s a multi-million-dollar investment,” said Goldman, whose first order of business was to build a strain library with broad collections of Asparagopsis representing different lineages and geographies. “We wanted to ensure we had a lot of strain diversity, to see how different strains would respond to various strategies to get them to reproduce. That was an important early decision as only some of the strains have been successfully cultivated.”

To date the team has managed to unlock some of Asparagopsis’ secrets and is able to produce large numbers of spores that can be seeded on substrate to prepare for ocean-based cultivation trials in the next six months. Greener Grazing is also developing ocean-based seaweed farming technology, incluing grids and automated planting and harvesting systems.

“Most seaweed farming is done near shore in shallow waters, but because the potential need for Asparagopsis is so large we felt it important to open up additional geographies, in open bays or more oceanic conditions,” he said. Australis plans additional plantings over the coming year to better understand the effect of seasonality on ocean-based production.

Goldman is optimistic about the future: “In the areas where we perceived there to be a lot of technical risk we have been successful, so I think there’s a high probability of our success going forward,” he said. “Our goal is to create the knowledge and tools for this to work on a global scale. We’ll need tens of thousands of individual farmers, so our role will be as knowledge providers and potentially as supply consolidators.”

It’s an exciting way for aquaculture to have a significant positive impact on the climate, he added.

“When you think about at climate solutions, many of them require major structural changes and have long-time horizons. With Asparagopsis we have an ocean-based ingredient where a very small amount – only 0.5 percent added to the feed – can reduce cows’ methane emissions by 80 percent. We’ve made pretty remarkable progress in a short time to build the knowledge and technology portfolio so Asparagopsis can eventually be farmed globally.” 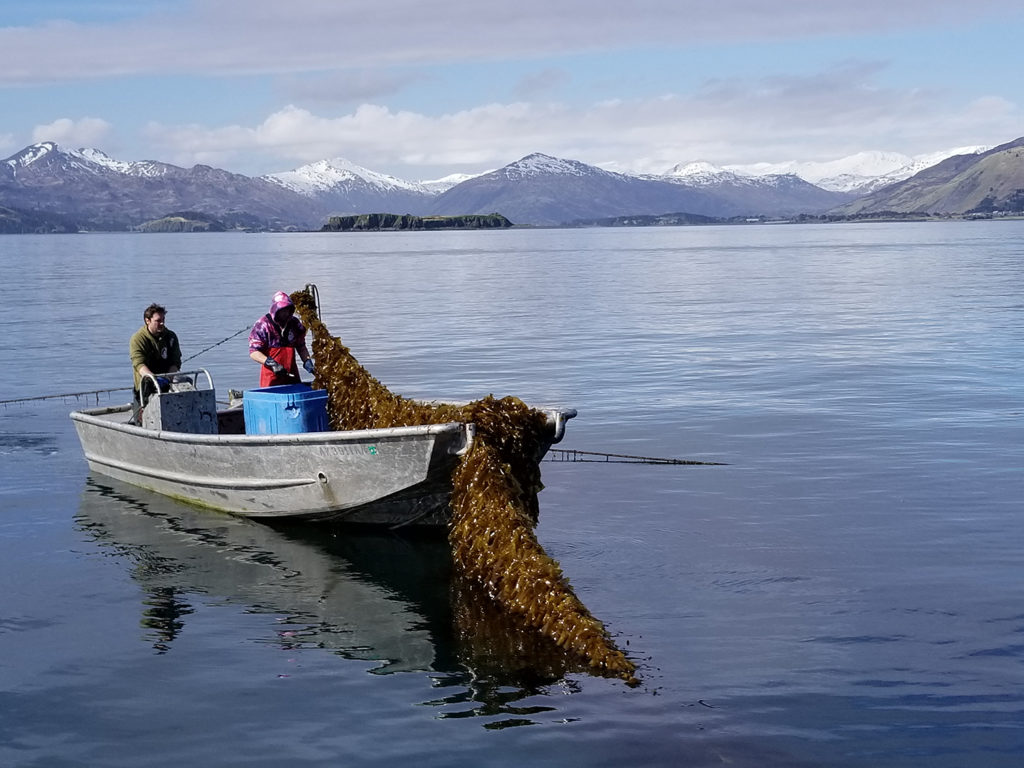 The word aquaculture is a dirty one in Alaska, where finfish farming is firmly prohibited. But if your farm fits a certain description, permits to proceed can indeed be obtained.