With the world’s population expected to double by 2050, there’s increasing concern about meeting the growing demand for animal protein. The climate crisis threatens food systems around the world, with the impact of climate change on wild-capture fisheries and marine aquaculture already being felt.

“Research on the effect of climate change on aquaculture and fisheries management is still in its infancy despite its devastating consequences on aquatic ecosystems,” wrote the authors and scientists of a study published in the journal Aquaculture and Fisheries (May 2022). “Both freshwater and marine species will be affected with more impact directed toward the latter due to the declining water quality caused by global warming.”

The impact of climate change on wild fish is significant. Warmer water leads to higher disease incidence and oxygen stress, which can result in high fish mortalities. Rising temperatures caused by human activities can push fish outside of their thermal tolerance limits and can cause an increased build-up of damaging pollutants. Multiple stressors can lead to physiological and immunological changes, and this, coupled with the easier spread of pathogens and parasites, poses a serious threat to the aquaculture industry.

Likewise, a paper published in American Fisheries Society (Feb. 15, 2022) indicated that Alaskan salmon suffered due to record heat and drought conditions in 2019. “These conditions are probably going to become more frequent in the future,” noted one of the report’s authors.

What began as a solution to extreme cold ocean water temperatures has evolved over the course of 20 years into an innovative technology for growing domestic Atlantic salmon efficiently and sustainably.

In terms of finding sustainable solutions, it’s expected that people will increasingly rely on aquaculture to meet growing demand for blue foods — fish, shellfish and algae that are caught or cultivated in fresh or saltwater. And technology can help grow the blue foods economy. Despite the ongoing risks of climate change on wild fisheries and marine aquaculture, wild capture and traditional sea cage operations can play an important role in delivering nutritious protein around the world.

AquaBounty’s state-of-the-art recirculating aquaculture systems (RAS), which carefully control and monitor all key aspects of the water inside its facility, keep its land-based fish farms at optimal temperatures for its salmon to grow and thrive, despite a rapidly changing and increasingly unpredictable climate outside.

The Massachusetts-based company also recirculates more than 95 percent of the water it uses to conserve this precious natural resource. The science that created AquaBounty’s Atlantic salmon in 1989 and developed the highly controlled RAS environment where they are raised, provides a safe, secure and sustainable solution for efficient seafood production.

Protein with a smaller carbon footprint

Most Atlantic salmon consumed in the United States are imported from Chile, Norway, Scotland and Canada. The carbon footprint of airfreighting fresh fish from these places is significantly greater than salmon farmed close to where U.S. consumers live. Environmental advocates have long promoted the benefits of domestic, land-based salmon farms; however, the economic viability of full-cycle salmon production on land historically was difficult with conventional salmon species.

AquaBounty salmon changed all of that. Its salmon are raised in the United States and Canada and were modified decades ago for increased efficiency and sustainability. The unique physiology of this salmon means it can get to harvest weight faster, is more effective at converting feed to biomass and has less impact on natural resources, compared to conventional salmon. Studies have shown that AquaBounty salmon use up to 25 percent less feed than conventional Atlantic salmon during grow-out.

Early genetic research on Atlantic salmon was intended to solve a far different problem than warming sea temperatures. Superchill, when the ocean water temperature falls below the freezing point of salmon blood (minus-0.7 degrees-C), was killing salmon farmed in Atlantic Canada. Researchers at Memorial University in St John’s, Newfoundland, experimented with inserting an antifreeze protein gene from winter flounder into fertilized Atlantic salmon eggs, with the goal of creating a fish that could survive superchill events in sea farms.

When this line of research failed to produce the desired result, the scientists turned their attention to producing an Atlantic salmon that could shorten the production cycle and reduce the risks associated with farming in the marine environment. Using what had been learned, the scientists succeeded on their first attempt of microinjecting a growth hormone gene from Chinook salmon into fertilized Atlantic salmon eggs.

AquaBounty Atlantic salmon now grow from hatch to market size (4 to 5kg) in 18 to 20 months compared to 28 to 32 months for conventionally farmed Atlantic salmon. More salmon can be produced in less time to meet the growing demand for a safe, domestic source of healthy protein.

Containment was of paramount importance when AquaBounty approached the U.S. Food and Drug Administration (FDA) in 1993 to seek approval to commercialize its salmon for food. AquaBounty carefully planned to farm its genetically engineered salmon in land-based facilities that would prevent escape and disease. An extra layer of security was added by developing all-female and sterile fish for commercial production. These fish are unable to mate with each other or with others of the same species in the wild.

“The FDA review process, which began in 1995, was long and thorough, said Sylvia Wulf, AquaBounty president and CEO. “When approval was granted in November 2015, the world was a far different place than it had been 20 years before. Climate change had emerged as a significant challenge to food production around the world. Land-based salmon farming, originally considered to keep salmon from escaping, now addressed several climate change problems.”

Sustainable salmon for a blue future

AquaBounty is changing the way salmon is produced. It raises healthy, nutritious salmon for consumers in an environmentally responsible manner, without damaging the ocean and other sensitive habitats. In fact, by raising its Atlantic salmon in land-based farms designed with complete system control, the AquaBounty environment can help protect wild salmon populations, preclude escapes, and prevent disease. Using land-based aquaculture systems, salmon can be farmed close to major consumer markets in the United State and Canada more efficiently and with a significantly reduced carbon footprint than the conventional methods.

“The ocean environment is changing,” said Wulf. “It is getting warmer. It is more susceptible to disease formation. It is becoming more polluted with microplastics and other contaminants. What began as a solution to extreme cold ocean water temperatures has evolved over the course of 20 years into an innovative technology for growing domestic Atlantic salmon efficiently and sustainably.” 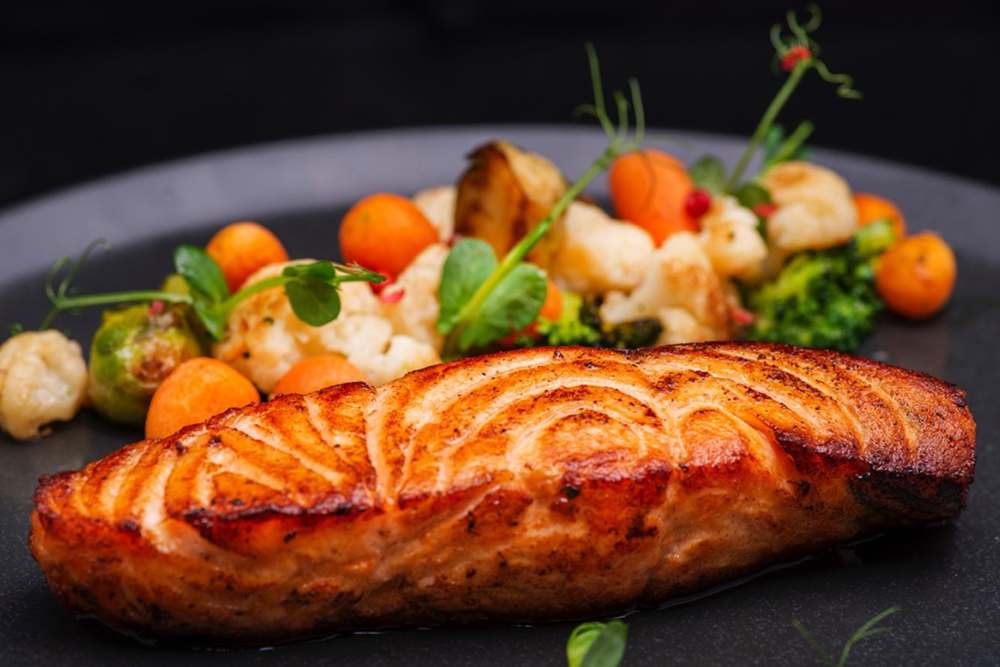 Moving toward a less-polarized GMO debate

Recent study suggests that perceptions of genetically modified food are becoming more favorable, which is good news for biotechnology in aquaculture. 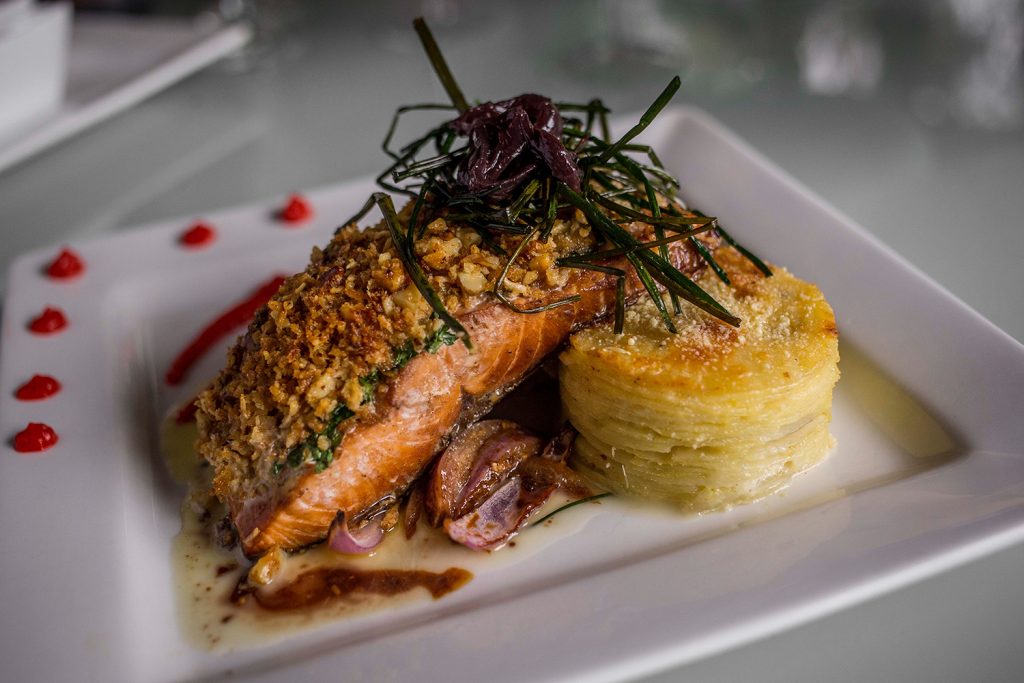 Biotechnology, as used in AquaBounty Atlantic salmon, can protect species diversity and improve the productivity of aquaculture.