A look at packaging and product interactions

Packaging materials and additives can directly affect the seafood products they are designed to contain. Food packaging interactions include transport of gases, vapors, water or other low-molecular-weight compounds, and may induce chemical changes in the food, the package or both.

Three main types of interaction occur at the interface between packaging and the food product: permeation of oxygen, odors or moisture; sorption or aroma loss and migration of additives or odors. Migration results in mass transfer of an additive from the package material to the food. This transfer can increase the risk of chemical hazards and/or formation of off-flavors.

Any substance that migrates from package material into food is of concern if it could be harmful to the consumer. Even if the substance is not particularly harmful, it could have adverse effects on the flavor and acceptability of the food. Consequently, additives in packaging materials must be safe and suitable for their purposes, and adhere to requirements limiting migration to foods.

The increasing use of plastics in food packaging has lead to a greater interest in the area of mass transport. Polymers are not totally inert in direct contact with packaged fish and shellfish products.

Flexible plastic materials often contain functional additives or processing aids, such as catalysts, antioxidants, heat stabilizers, plasticizers and colorants. Most of these additives are used in small amounts, usually at around 1-2 percent of the materials. Polymers are susceptible to oxidation, which leads to increased brittleness and loss of strength. Films containing antioxidants at 0.001-1.000 percent protect against the oxidative deterioration of food products by providing a functional barrier to oxygen and/or inhibiting auto-oxidation of the product.

During recent years, considerable attention from nongovernmental organizations and regulatory agencies has been focused on food packaging materials, especially plastics. In a number of countries, extensive legislation has been formulated.

Such legislation often takes the form of a list of permitted substances accompanied either by compositional limits or migration limits for foods or liquids. In many countries, this approach has not been followed due to the general lack of fundamental information on which to base such a system.

Instead, the countries have opted for a basic legislative framework supported by informal controls that rely to a large extent on close cooperation between industry and government. It is thus recognized that any future legislation should be made on a sound scientific basis to afford adequate protection to consumers.

Studies using high-pressure processing at 800 MPa for five or 10 minutes at 40 or 60 degrees-C showed no migration of antioxidants from a polypropylene film into the food product. Another high-pressure processing study found no migration of selected polymeric materials caused by exposure to pressures as high as 827 MPa for 10 minutes at temperatures up to 75 degrees-C. However, storage time was shown to have an effect on the migration level.

Antimicrobials have been used for many years as direct food additives. There is substantial evidence that some of these additives are also effective as indirect additives incorporated into food packaging materials.

Antimicrobial food packaging is directed toward the reduction of surface contamination of processed, prepared products such as sliced, cold-smoked salmon. The use of such packaging materials is not meant to substitute for good manufacturing or sanitary practices, but it could be a secondary source of food safety by limiting the growth of spoilage or pathogenic microbial organisms. For example, the coating of low-density polyethylene film or barrier films with methylcellulose as a carrier for the bacteriocin nisin has significantly reduced the presence of Listeria monocytogenes in vacuum-packaged food.

Other research has shown that the use of chitosan inhibited the growth of L. monocytogenes, and chlorine dioxide sachets reduced Salmonella counts on modified-packaged meats. In another study, fresh oysters were wrapped in antimicrobial films coated with a bacteriocin incorporated into a polyamide binder layer. The packaged oysters were stored at 3 and 10 degrees C and monitored to determine their quality and shelf life extension.

The effects of the coating on coliform microflora were more pronounced at 10 than at 3 degrees C, while the effects on total aerobic bacteria were consistently evident at both temperatures. Based on a total aerobic bacterial count of 7 log10/g as a microbial criterion, the use of bacteriocin-coated film at 10 degrees C could extend the shelf life of oysters to 12 days compared to a maximum of nine days with the use of plain film.

The biogenic amine index (mg/100 grams of histamine plus putrescine, cadaverine and tyramine) of sardines (Sardina pilchardus) was determined in product stored at 4 degrees-C for up to 15 days in air, vacuum packaging and modified-atmosphere packaging (MAP) with 60 percent carbon dioxide and 40 percent nitrogen. The sardines were organoleptically acceptable for up to three days in air, nine days in vacuum packaging and 12 days in MAP.

The biogenic amine index generally increased with increasing storage time (Table 1). The amine contents were highest in sardines stored in air, followed by vacuum packaging and MAP. However, when garfish (Belone belone) were stored at 0 or 5 degrees-C in air or MAP (40 percent carbon dioxide, 60 percent nitrogen), no significant difference in histamine formation was caused by the microorganism Photobacterium phosphorem.

Conversely, biogenic amine profiles for wild sea bass (Dicentrarchus labrax) stored in ice at 4 degrees-C and wrapped in aluminum foil and cling wrap were studied for up to 12 days of storage. Histamine was detected in both samples at the end of the storage time. Other biogenic amines increased in concentration as storage time increased. The levels of biogenic amines were significantly higher in sea bass stored in the cling film and aluminum foil as compared with the iced storage conditions.

While MAP has been shown to offer a variety of benefits, seafood purveyors should consider multiple factors when making decisions regarding packaging. Among these considerations are cost, expected storage time, the nature of the product being packaged, the effects of MAP on organoleptic qualities of the product, federal regulations, and the possibility of chemical migration from the packaging due to processing, storage conditions and handling of the product prior to consumption. When MAP is used, caution is also needed to address the potential for growth and toxin production by certain microorganisms.

Spoilage in freshwater prawns is endogenous rather than exogenous and results from proteolytic enzymes in the cephalothorax. 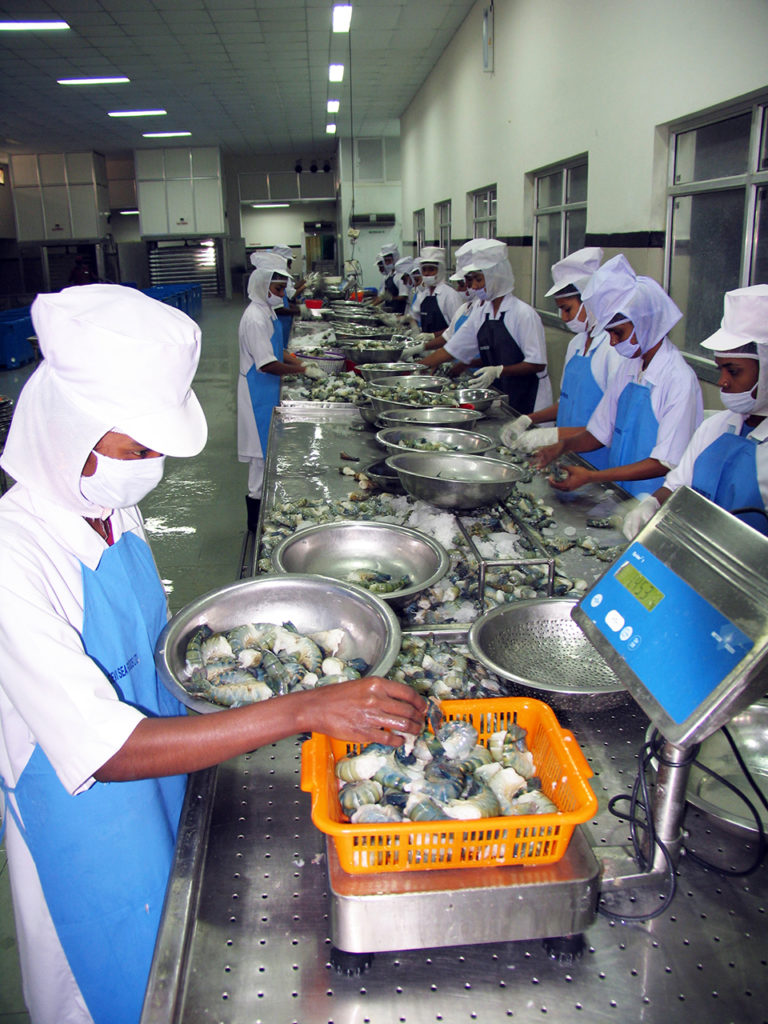