The challenge facing aquaculture nutritionists is to continually reduce feed costs, improve conversion efficiency, and minimize environmental impact. The conventional approach is to more accurately define the nutrient requirements of the target animal, the nutritional value of feed ingredients, and the impact of feed processing.

However, one factor that is often overlooked is the nutritional contribution of the culture environment. In the case of rainbow trout raised in fast-flowing spring water, this contribution may be negligible. But in systems with limited or no water exchange and a heavy organic load, such as shrimp or tilapia ponds, the contribution can be substantial.

Major advances in understanding nutrient pathways in aquaculture systems resulted from early studies of natural ecosystems. For example, ecological modeling of mangrove estuaries traced the mysterious pathway by which mangrove leaf litter with a protein level of 3 to 6 percent was transformed into highly nutritious food called “organic detritus.”

Detritus refers to disintegrated or eroded matter. The term organic detritus was proposed by Odum and de la Cruz (1963) to designate particulate organic material originating from the dead bodies, nonliving fragments, and excretions of living organisms. Modeling studies delineated the mechanisms by which organic material is incorporated into the aquatic ecosystem.

Particles of decomposing organic material, which are poor in essential nutrients, are coated with a film of bacteria. The bacteria absorb nutrients from the water and the organic particles. This process decreases the energy of detrital particles, but increases their protein and phosphorus levels, thereby raising their food value (Wood-house and Knutson, 1982).

Organic detritus plays a major role as a food source for a variety of estuarine organisms, including amphipods, fiddler crabs, snails, mussels and juvenile fish. The film of bacteria and other microorganisms generally constitutes 5-10 percent of the mass by weight of detrital particles. Detritus-feeding organisms derive nourishment by strip-ping the microorganisms from the detrital material as it passes through their guts.

The fecal pellets may be recolonized and the process repeated until all the organic material has been utilized. By taking advantage of the recy-cling capability of organic detritus within the culture environment, nutritionists and pond managers can reduce feed costs, improve conversion efficiency, and reduce environmental impact.

Intensive aquaculture systems historically have relied on high rates of water exchange to flush out wastes and maintain water quality. Increasing demand for water conservation, restrictions on effluent disposal, and need for biosecurity are now limiting the use of flow-through systems.

The concept of AMR systems is simple: Potentially toxic nitrogenous wastes are converted into bacterial protein, which is then available for detrital feeders. AMR requires strong aeration and mixing to continually suspend organic waste in the water column for digestion by bacteria. Aerobic heterotrophic bacteria colonize the particles of organic waste and absorb nitrogen, phosphorus, and other nutrients from the water. This process improves water quality and recycles wastes as bacterially enriched detritus. Typically, no external filtration and little or no solids removal is required.

In conventional culture systems, only about 20 to 30 percent of the carbon, nitrogen, and phosphorus in feeds is assimilated by fish and shrimp. The remainder is lost as uneaten feed and excretory waste. Much of the nitrogen is in the form of ammonia resulting from protein deamination. Unionized ammonia is toxic to aquatic animals.

In semi-intensive systems, ammonia accumulation is seldom a problem, due to its absorption by phytoplankton and bacteria. However, in intensive systems, increasing levels of ammonia ultimately stress animals, suppress growth, and limit yields. To prevent ammonia toxicity, interventions such as water exchange or external nitrification is introduced.

An alternative is AMR, which encourages the development of heterotrophic bacterial communities within the culture system through strong mixing, aeration, and the addition of carbonaceous substrates.

Heterotrophic bacteria have the remarkable ability to synthesize protein from organic carbon and ammonia. However, it is crucial that the ratio of carbon to nitrogen (C:N) be suitable for bacterial utilization. As most gardeners know, bacteria are inefficient at composting organic materials that are either too carbonaceous (leaves or wood), or too nitrogenous (high-protein vegetable meals or manures).

Balanced mixtures of carbonace-ous and nitrogenous materials with C:N of approximately 20:1 are more readily digested. For example, cellulose is a highly carbonaceous material resistant to bacterial decomposition. But Avnimelech et al (1999) demonstrated that the combination of cellulose powder and ammonium sulfate produced sufficient bacterial protein to grow unfed tilapia at one-third their normal rate.

In practice, most aquaculture diets are designed for the target organism without consideration of the culture environment. As a result, C:N is generally deficient, and production systems accumulate inorganic nitrogen.

Steven Serfling, former CEO of the Solar Aquafarms indoor AMR tilapia farm in California, USA, described the tendency of inexperienced technicians at the facility to replace a portion of the “dirty” bacterial floc water with clean water. This would reduce the nitrogen-digesting capability of the system and cause increases in ammonia levels.

As ammonia levels rose, inexperienced technicians would typically respond by replacing more water, which would further exacerbate the situation. Serfling’s solution in such a crisis was the addition of carbonaceous material, such as wheat flour or alfalfa, to provide a source of organic carbon for bacteria to digest the ammonia.

Avnimelech (1999) presented formulas for calculating the amount of organic carbon required to reduce inorganic nitrogen levels. To reduce ammonia levels in the culture system, he suggested that carbohydrate be added at 20 times the level of ammonia N. For example, if ammonia levels must be reduced by 1 grams per cubic meter, then 20 grams per cubic meter of carbohydrate should be added to the culture system.

Sources of organic carbon include alcohols, sugars, starches, and fiber. Alcohols and sugars are highly digestible. This can be an advantage in initially establishing a bacterial population to compete with phytoplankton for absorption of nitrogen and phosphorus within a pond

Complex carbohydrates from grains such as corn and wheat are metabolized more slowly. They have the advantage of providing a particulate structure for the attachment of bacteria, as well as a more sustained release of organic carbon. In addition, they require a suite of bacterial enzymes for decomposition. These enzymes may improve digestion in the target aquaculture species when it consumes the detrital material.

Fibrous materials are generally avoided, because they are relatively resistant to decomposition. However, they may have some utility in providing a long-term structure for the attachment of bacteria.

Models are being developed to predict carbon and nitrogen accumulation and oxygen requirement in detrital ponds. Avnimelech et al (1995) described the degradation rate for organic carbon (C) by microorganisms with a first-order kinetic expression:

Montoya et al. (1999, 2000) developed a simulation model to examine feed and feeding strategies of nitrogen and phosphorus dynamics in AMR systems that allow daily predictions of:

A carbon compartment is currently being developed to more accurately represent bacterial and phytoplankton dynamics within AMR systems.

A process of community succession occurs over time within AMR ponds in response to the increasing organic load and maturity of the ecosystem. For example, in intensive shrimp ponds in Belize that are filled with clear Caribbean seawater and operated with strong aeration and zero water exchange, the following phases have been observed:

Floc particles are agglutinated by a polysaccharide slime produced by bacteria. Suspended materials are adsorbed onto the floc, where they are hydrolyzed by extracellular bacterial enzymes.

Older ponds are characterized by large floc masses that rapidly settle out of suspension if water agitation is stopped. AMR systems at this stage are highly stable and can process large amounts of organic inputs. McIntosh (1999) used feeding levels as high as 450 kilograms per hectare day with no water exchange. The volume of the flocs constitutes about 1 to 3 percent of the water volume, thus they can be easily filtered out of the pond.

In most aquaculture systems, the oxygen content of the water is governed more by the activities of algae and bacteria than the target culture species. As conventionally managed ponds reduce or eliminate water exchange, higher loads of suspended organic material and bacteria accumulate in the water.

As a result, biological oxygen demand increases, and aeration rates must be increased accordingly. For example, Hopkins et al. (1993) reported that 20 horsepower per hectare of aeration was sufficient in zero-water-exchange ponds with production rates of 3.2 metric tons (MT) per hectare, but mass mortality occurred when the same conditions were used to attempt 6 MT per hectare.

McIntosh (1999, 2000a) reported aeration requirements for AMR shrimp ponds in the range of 1 hp for each 300 to 550 kg of production in zero-water-exchange systems producing 11 to 26 MT per hectare cycle. The upper end of this range was reached by periodically draining concentrated organic sludge from a point of accumulation near the center drain.

In addition to oxygenation, aerators must provide sufficient mixing to prevent anaerobic zones of sedimented sludge. Anaerobic sediments generate toxic waste products such as nitrite, hydrogen sulfide, and methane. This is particularly important in seawater systems, where the abundance of sulfate favors the production of hydrogen sulfide under anaerobic conditions.

Note: Cited references are available on request from the authors. 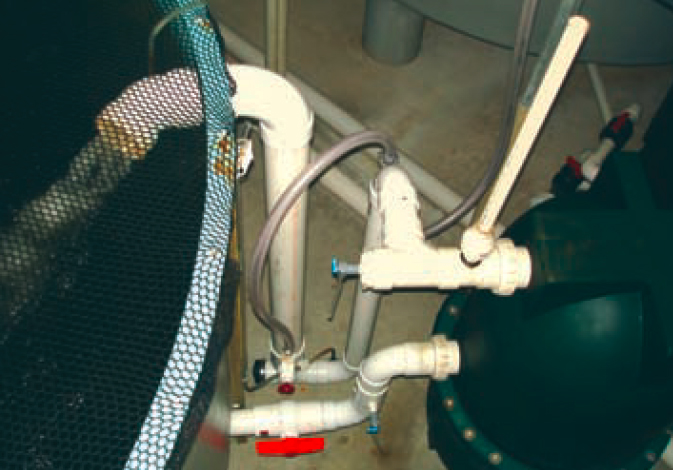 Denitrification by anaerobic bacteria can remove nitrates from RAS, but the operation requires anaerobic conditions and the addition of carbon sources. 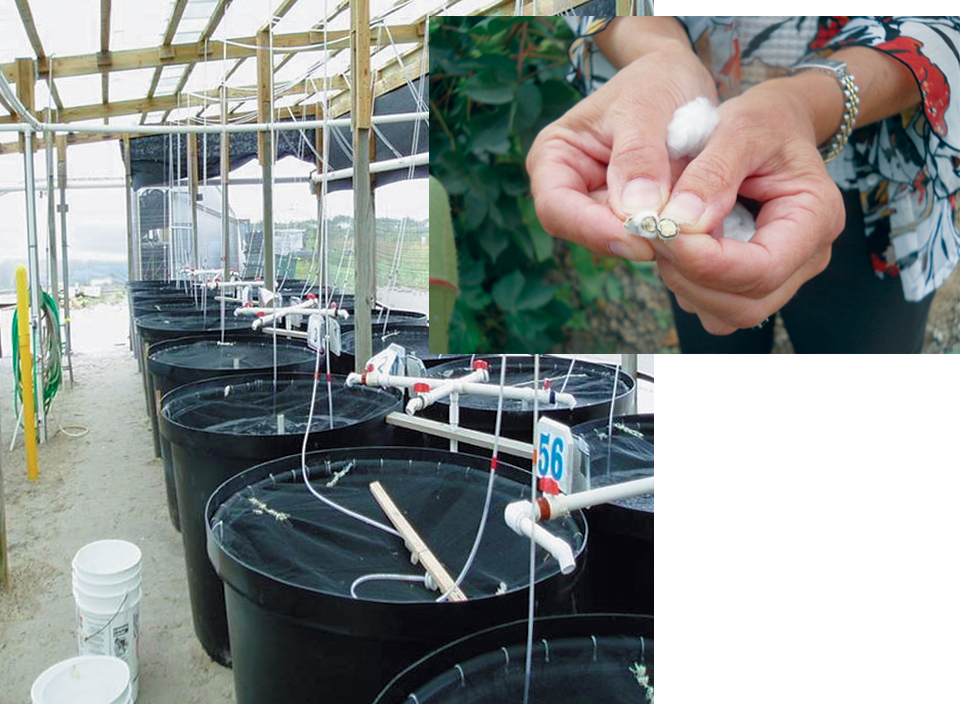 Cottonseed meal is high in protein and less expensive than fishmeal and soybean meal. Cotton plants can be engineered without gossypol in their seeds. 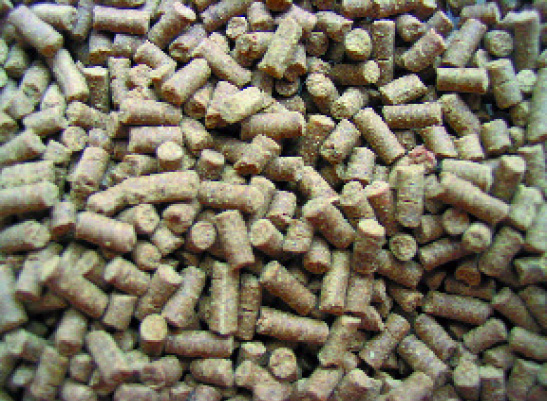